How denial and conspiracy theories fuel coronavirus crisis in Pakistan | Asia | An in-depth look at news from across the continent | DW | 23.06.2020

How denial and conspiracy theories fuel coronavirus crisis in Pakistan

The coronavirus is spreading at an enormous pace in Pakistan. Analysts say the government's inaction and mismanagement of the virus has worsened the outbreak. 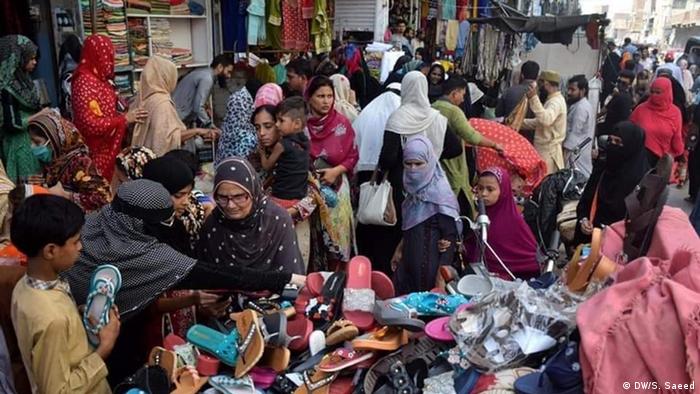 As of June 23, there were around 187,000 cases of the coronavirus with over 3,700 deaths in Pakistan. The number of infections is expected to reach 300,000 by the end of the month and over a million by late July or early August.

The World Health Organization (WHO) warned mid-June that the average infection rate in Pakistan has risen to 22.6%. Within a month, the country's daily infection count increased to an average of around 6,000 from 1,000.

Studies carried out by the Imperial College London and the University of Washington suggest that the actual number of cases in Pakistan could be anywhere between 3 to 10 times higher than those registered by the government.

Despite the virus spreading in Pakistan at an alarming rate, the government has relaxed lockdowns across the country and has decided to reopen the tourism industry.

In March, Prime Minister Imran Khan compared the coronavirus to an "ordinary flu," claiming that 97% of infected patients recover without requiring medical attention. In a televised address to the nation, Khan said that Pakistan could not afford a nationwide lockdown as one fourth of its population lives below the poverty line. Instead, his government has lifted all public restrictions in an apparent attempt to revive the economy.

Analysts warn that the government's denial and mismanagement of the virus has worsened the outbreak in a country with an already weak and overworked healthcare system.

The first case of coronavirus was confirmed in Pakistan on February 26, 2020. The country was put under a partial lockdown from April 1, which lasted until May 9.

Earlier in March, when coronavirus cases in Pakistan were relatively lower, the federal government allowed Shiite pilgrims from Iran to return to the country through Baluchistan province.

The pilgrims were not properly quarantined, which resulted in a spike of infections. Also, the government allowed thousands of Sunni worshippers to go ahead with the "Tablighi Jamaat" congregation in Pubjab province. Many of the new COVID-19 cases have emerged from that mass gathering.

Despite resistance from local provincial governments and opposition parties, Khan's government then gave into pressure by trade unions and religious groups to lift coronavirus restrictions to celebrate the Eid festival on May 24. Khan said it was up to the public to take precautions. But when the public failed to do so, Khan said it was their own fault.

A recent survey by the Islamabad-based research organization, Gallup Pakistan, showed that 55% of Pakistanis believe that the threat of the coronavirus is exaggerated.

Meanwhile, a poll conducted by Ipsos, a global market research and public opinion specialist, revealed that only 3% of Pakistanis have no misconceptions about the coronavirus, how it spreads and methods for its prevention and treatment. The poll also showed that a third of respondents believe in conspiracy theories related to the pandemic.

Experts blame the Pakistani government for not debunking misinformation and unsupported claims. Government inaction and a general lack of trust in the government and authorities have also made people more open to conspiracy theories. The situation is also exacerbated by the spread of such theories via Pakistani media and various social media platforms.

Read more:  COVID-19 in Pakistan: Why the government and doctors are at odds

Political analyst and journalist Owais Tohid explained that conspiracy theories have always been widespread in Pakistan and that – from the current health crisis to the war on terror – many Pakistanis have traditionally taken refuge in denial. According to Tohid, politics and religious conservatism have exacerbated the spread of myths and conspiracy theories surrounding the disease, pushing scientific and medical facts under the rug.

"The spread of the virus is fuelled by politics and religion," Tohid told DW. "From the theory that the disease is more harmful in the West than the East, and that it kills white people more than coloured and African American people, and that people in Pakistan have immunity, the list goes on and on," he said. "People in Pakistan believe in conspiracy theories, thrive on them and remain in denial till the reality hits them right in their face."

Meanwhile, civil society activists say that Pakistani authorities continue to appease Islamists even when the country is facing a worsening public health crisis.

Professor of sociology and vice chancellor of the University of Okara, Muhammad Zakria Zakar, told DW that many Pakistanis deny the crisis because scientific thought and training has not yet fully developed in the country.

"We don't focus on scientific facts and reasoning in our curriculum," Zakar said, referring to Pakistan's education system.

Amongst conservative individuals, disease is often perceived as God's punishment for wrongdoing. Seeking help from spiritual or traditional healers is both a popular and more accessible alternative to receiving medical treatment.

"If someone has been diagnosed with COVID-19, the person will be stigmatized as someone who has sinned and is thus facing the wrath of the God," said Zakar.

According to the sociologist, superstition and folklore are embedded in traditional Pakistani culture, making it easier for many people to be more receptive to myths and conspiracy theories.

A combination of religious conservativism, illiteracy and a lack of access to resources have helped fuel conspiracy theories. According to Zakar, although uneducated individuals from low to middle income backgrounds are more likely to engage in traditional forms of healing and be more receptive to conspiracy theories surrounding the virus, literate individuals from middle to upper income backgrounds have also been known to engage in such behavior.

Politically motivated experts or medical doctors, or influential figures inspired by religious dogmas, have been known to advocate conspiracy theories surrounding the pandemic. Under the guise of "expertise,” their theories are often welcomed. In April, Tariq Jameel, a popular Islamic preacher, claimed that the coronavirus is a sign of God's wrath over sins such as women dancing and dressing immodestly.

Biggest crisis yet to come

The WHO has recommended that Pakistan impose intermittent lockdowns lasting two weeks to contain the outbreak. Meanwhile, Pakistani opposition parties and doctors' associations are demanding a complete lockdown.

Zafar Mirza, special assistant to the prime minister for health, said such recommendations are not mandatory and that the government must consider both economic and health impacts of the pandemic.

Currently, the federal government is trying to control the spread of virus by imposing "smart" lockdowns in COVID-19 hotspots.

However, Tohid warned that millions of Pakistanis are threatened with job losses amid the pandemic. "So, in the coming months, Pakistan will probably confront its worst crisis ever."

How Pakistan-administered Kashmir managed to contain the coronavirus