In Karlsruhe, southwestern Germany, one young feminist has launched her own campaign against sexism and rape. Her unusual idea has spread through social media to inspire students in India. 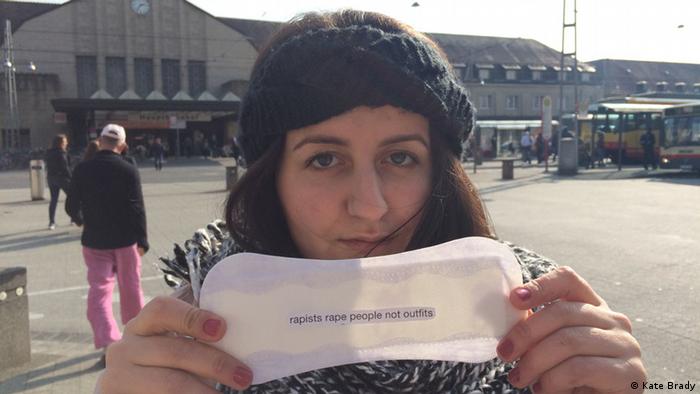 Elonë Kastrati began her project #PadsAgainstSexism last Sunday on International Women's Day after being inspired by feminist quotes she found on Instagram and Tumblr.

Together with her sister, Nora, the 19-year-old took to the streets of Karlsruhe where she has been sticking up sanitary pads - each bearing a poignant message about rape and the portrayal of women.

"Imagine if men were as disgusted with rape as they are with periods," says one slogan, which the 19-year-old sticks to a phone box.

"I wanted to provoke and get people talking about rape and taboos about menstruation," Elonë told DW in Karlsruhe.

Elonë told Deutsche Welle she wanted her campaign to question the extreme representations of women in society, from the sexualized to the shamed. 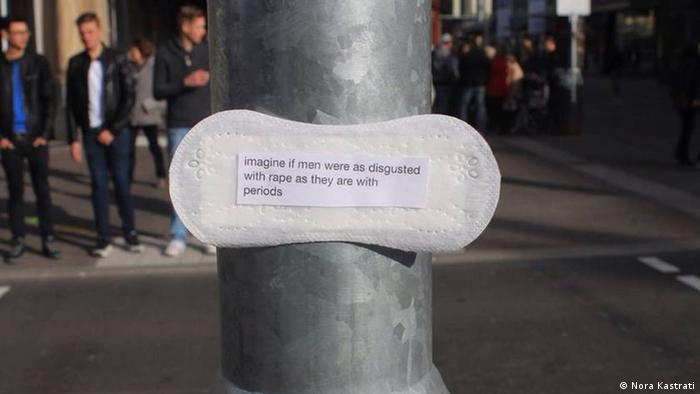 Since sharing photos of her campaign on Tumblr and Instagram last Sunday, her images have been viewed hundreds of thousands of times by users from around the world, as far apart as the US, India and Brazil.

The project has already inspired students at Jamia Milia Islamia Central University in New Dehli to stick up similar messages on sanitary pads around the university campus.

One of the girls involved in the campaign who wished to remain anonymous told the university's student-run news website, Jamia Journal, that "in a country where sexism is still so rampant, this was a blunt initiative to spread awareness."

"The message is strong, trying to remove the stigma attached to periods, something extremely natural," the student added.

It isn't just in her hometown, however, that Elonë is on a mission to change attitudes towards rape and women.

"My parents are both Albanian and moved here in the early 90s. I go about twice a year, so I know what the situation is with sexism there. It's impossible there for me to walk home without men catcalling or making horrible noises. This makes me feel really uncomfortable," Elonë explained.

The 19-year-old told DW that she believes attitudes towards a woman's worth begin in a child's upbringing.

"I was lucky to grow up in a very open-minded house. My parents were always at peace with each other and there were no stereotypical gender roles," Elonë said.

"It starts with smaller things - comments like 'oh, you hit like a girl' - what is that? It's like being a girl is a synonym for not being strong."

"When I was younger - about 8 years old - I asked my dad, 'What am I?' and he said, 'Elonë, you know what you are? You are a human.' I'll never forget this sentence because it speaks for my father and my mother and for how I grew up."

In response to her awareness campaign, however, Elonë has received her fair share of negative comments.

"I've had messages such as, 'You should be raped too.' But this doesn't offend me. It's just shows their low level of intelligence. The main thing is that the topic is being discussed. "

In response to the anti-feminist comments, however, Elonë said: "I really dislike it when people practice feminism as manhate, because for me, feminism means equality for both sexes and nothing else." 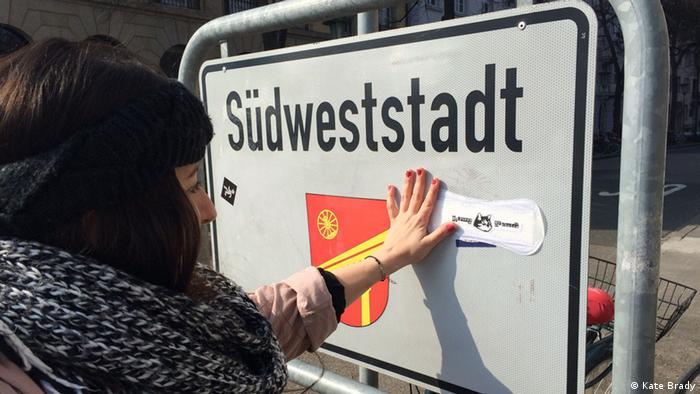 In the 300-year-old German town of Karlsruhe, the public are divided on Elonë's unconventional campaign tactics.

Forty-three-year-old Patricia sympathized with Elose's efforts but remained critical of her approach.

"I support anything which will improve the rights and safety of women. But is this the best way? We already have enough litter to clear up. I think we need to be going to the top and calling for reform," she told DW.

As the §177 German criminal law against rape currently stands, a rape case requires coercion of the victim in order to have a chance of success in court.

This means that the sexual act must have been enforced either by force, with a threat of imminent danger to the life of the victim or by exploiting a "vulnerable situation."

More specifically, a woman explicitly and repeatedly saying no or crying, for example, would not suffice.

Due to the tight interpretation of a "vulnerable situation" many sexual assaults go by unprosecuted as they fail to fulfill the requirements of §177 of the penal code.

Such was the outcome in 2006, when Germany's Federal Court justified the acquittal of a rape case.

"The scarce findings that the defendant performed sexual intercourse against the expressed wishes of the plaintiff after ripping off her clothes does not prove coercion of the victim by force. The tearing over of clothing alone is not sufficient to meet offense."

'His word against hers'

According to a study carried out across Germany last year by the Criminology Research Institute in Lower Saxony, conviction rates of rape range from extremes of 4.1 percent to 24 percent across Germany's 16 states.

In 2004, 21.6 percent of women who reported a rape case saw the successful conviction of their attacker. Twenty years on, this number has fallen to a national average of just 8.4 percent.

Director of the study, Christian Pfeiffer said that despite women being more willing to form a complaint than in the past, proving the crime remains problematic.

"Evidence in such cases is difficult when it's his word against hers," Pfeiffer said.

"I definitely support a reform of the law," Elonë told DW.

"Rape cannot be taken lightly. This is happening in places right now, all over the world. So it makes me so happy that my campaign is at least helping this discussion to spread everywhere."

An Indian student who applied for an internship at Leipzig University claims that a professor rejected him because she didn't want Indian men on her project - for fear of rapists. The professor rejects the accusation. (10.03.2015)