India′s ′rape problem′ a problem for Leipzig University | Germany | News and in-depth reporting from Berlin and beyond | DW | 10.03.2015

An Indian student who applied for an internship at Leipzig University claims that a professor rejected him because she didn't want Indian men on her project - for fear of rapists. The professor rejects the accusation. 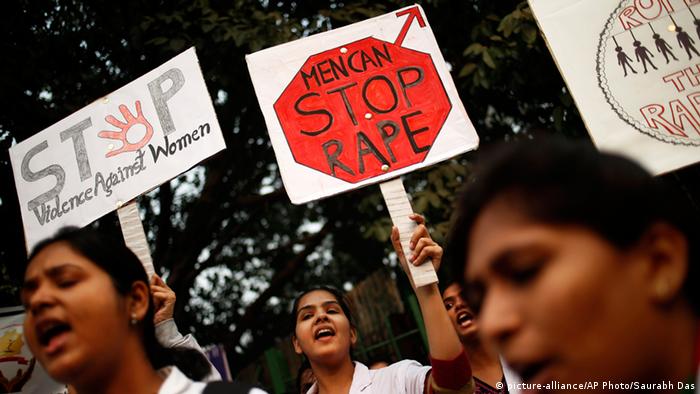 The rejection of an Indian student's application to study at a German university has gone viral, with Germany's ambassador even sending a missive from Delhi to Leipzig.

The man, who remains anonymous for now, had applied for a position in the biochemistry lab of Professor Annette Beck-Sickinger. Her reply was originally posted on The original post on Quora, a website where individuals can ask the Internet community for advice. From there, it quickly blew up on social media.

Hundreds of tweets with the hashtag #GermanProfessor have called Beck-Sickinger a racist. According to the screenshots originally posted, the professor wrote the applicant that she did not accept any male students from India for internships. "We hear a lot about the rape problem in India which I cannot support," the screenshot reads. "I have many female students in my group, so I think this attitude is something I cannot support."

When the student replied complaining about the generalization, Beck-Sickinger admitted that the accusations did not apply to every individual. But, she added, "it is also unbelievable that the Indian society is not able to solve this problem ..." The professor referred to reports about rape and sexual violence in India that reach Germany "on a weekly basis." German media have reported on such assaults in India more frequently since the gang rape of a young woman on a bus in Delhi in December 2012.

Even Germany's ambassador to India, Michael Steiner, has become involved. In an open letter to Beck-Sickinger, Steiner found strong words for his disapproval of the professor's behavior, calling it an "oversimplifying and discriminating generalization:"

Beck-Sickinger, who finds herself at the center of this outrage, claims she never rejected the applicant because he was an Indian man. "I never wrote the mail in this way," she is quoted as saying in an official statement from Leipzig University. "It has been put together from individual segments taken from different mails." According to the university's release, the student wasn't accepted into the laboratory simply because there were no more spots. "I am by no means racist or xenophobic in any way," Beck-Sickinger said in the statement.

In the the university statement Beck-Sickinger apologizes to anyone whose feelings she had hurt. This apology, however, was not received well on Twitter. Users mostly seem to believe the applicant's version of events and see the professor as dishonest. "If India is a country [of] rapists then Germany is a country of racists," a user named Devil's Advocate tweeted.

The News Minute, an online magazine, even published the story of a second student, who also wishes to remain anonymous. He claims to have received a similar email from the biochemistry professor when he applied for a PhD position with her in March 2014. According to a screenshot of that email, Beck-Sickinger rejected this student because of India's "rape problem" as well. She allegedly wrote: "I cannot support a society which is not able to respect females in any aspect. I think cultured people cannot close their eyes."

Another Indian student, Vishal, who asked that only his first name be used, is doing a PhD in chemical informatics in Berlin. He came to Germany from India in 2011 to do his master's at Bonn University and said he was shocked when he heard about how the professor in Leipzig had allegedly treated another Indian man. "I was awestruck," he told DW. "It's really, really sad to hear something like that from a German professor."

Vishal said that he himself had never encountered racism in Germany. He was actually surprised by the warm welcome his institute gave him when he first arrived and said that no one had ever considered him a rapist just because he was from India.

The experience of his friend Priyanka has been equally positive. She came to Germany in October 2010 and is now also working on her PhD in Berlin. She has been part of an international internship program in Heidelberg and highly values the cooperation with fellow PhD candidates from different backgrounds.

When Priyanka read that Professor Beck-Sickinger had allegedly rejected a student because he was male and Indian, she was outraged. "I couldn't believe this could actually happen in science," she told DW. "We don't do science to advance a particular country. Our goal is broader. Science connects us beyond our geographical barriers."

The Indian government has banned all media outlets from airing the documentary "India's Daughter." An interview of one of the convicts of the fatal Delhi gang rape in 2012 has snowballed into a huge controversy. (04.03.2015)