"I have no idea what the impact of this is," the Nigerian-born artist told DW. "All I know is the realities of every day: you work, you collaborate with others, you do things, and things come to you as you work, as you develop.

"And for me, the main thing is that as we see how the planet is going, what is the future for tomorrow?"

Pegged to be published in the November issue of the German business magazine Capital, the ranking recognizes upcoming artists who have started to impact the art world.

Meanwhile, another list of established, well-known and highly paid artists occupy the "Top 100" list, atop which sits the German painter Gerhard Richter.

Focused on the future

"The future as an artist is not just linked only to this Kunstkompass ranking," the artist told DW, but "to the possibilities of our existence on this planet for the future."

The 46-year-old, who was the artist in residence in 2019 at Berlin's Martin-Gropius-Bau museum, has long been interested in the way people have imposed systems of exploitation on land, creating a violent legacy. 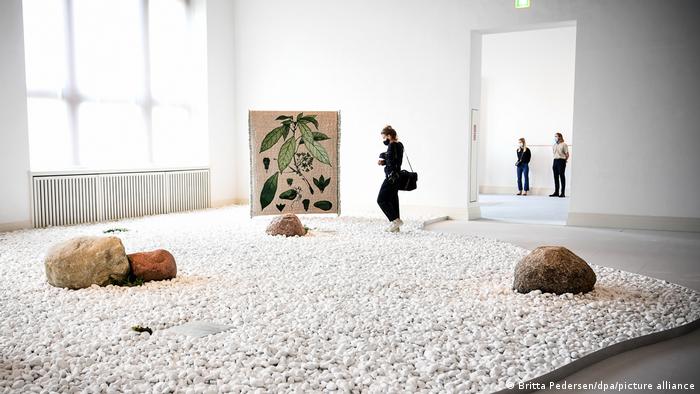 The outcome of Nkanga's residency is the current Gropius-Bau show, There's No Such Thing as Solid Ground, which explores the interdependent relationship between the human body and the landscape, and how humans ultimately leave their mark on the planet.

However, the artist is not only interested in pointing out emerging deficits, or in exposing simple exploitation. Instead, she is interested "in the complex themes of repair and care," Clara Meister, co-curator of Nkanga's current exhibition at Berlin's Martin-Gropius-Bau, told DW.

Also curated by Stephanie Rosenthal, the director of the Martin-Gropius-Bau, There's No Such Thing as Solid Ground picks up on the themes in Nkanga's work Carved to Flow, created for documenta 14 exhibition in Kassel and Athens, which explored the complex economic histories and geographic networks underlining the production of everyday products. 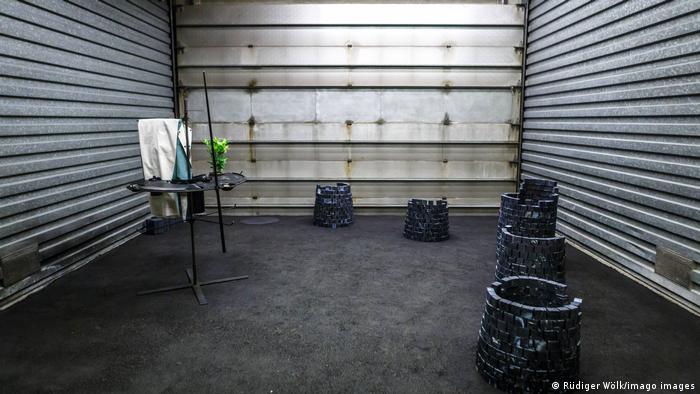 Encounters with the natural world

Meanwhile, the relationship between people and plants was already the subject of the Nigerian artist's Diaspore work from 2014, which was originally conceived as a performance and now reappears in Berlin as a site-specific installation. It is focused on the Cestrum Nocturnum, or "Queen of the Night" plant, which Nkanga writes "is deeply connected to my childhood memories due to the powerful, sweet perfume it released only at night. During the day it just looked like any other plant in the neighborhood."

The plant also embodies movement for Nkanga, as it reached its home in West Africa via trade routes from the West Indies, where it originated. Now the plant is standing on the floor in pots in 15 different versions, spread over the entire area of the room.

The plants were initially carried by 15 performers during the first month of the show in July. 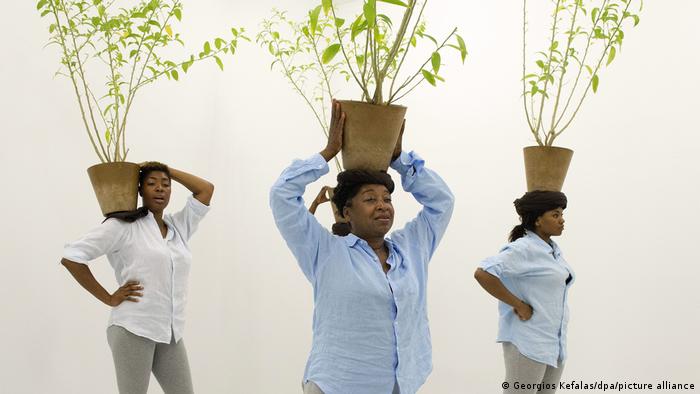 Otobong Nkanga's "Diaspore" was shown as a performance in Basel in 2014 (picture), and in Berlin in 2020 as an installation

With her installation, Nkanga also wants to stimulate the mind of the viewer: "People can connect with this plant by walking through the space, perhaps thinking about human bodies, about plants, about land, about movement and displacement. In another room of the exhibition, it is stones that can be related to," she said.

Here, she refers to the landscape created by another installation in the show, Taste of a Stone, which is described as a meditative oasis through which to explore historical and geographic traces (see picture above).

According to Clara Meister, the work is intended to invite visitors to "to ask questions together with the stones that make up the installation: Where do you come from, what are your roots, where are you going?"

At the same time, the room is intended as a place of encounter. In November, various events, so-called "movements", are scheduled to take place there.

Meister says she is "insanely happy" that the Nkanga has been recognized on Kunstkompass' list of the "stars of tomorrow," which should inevitably lead to greater visibility and sales for her work. Since 1970, the renowned Kunstkompass database has been tracking the careers of the world's leading contemporary artists, and its focus on Nkanga reflects the artist's increasing renown in the global art world.

Previously the subject of solo exhibitions in important galleries such as the Zeitz MOCAA in Cape Town, or the Museum of Contemporary Art in Chicago, the Nigerian artist's work has also been acquired for renowned public collections by the Centre Pompidou in Paris and the Tate Modern in London, for example. Her work also appeared at the 2019 Venice Biennale, where she received a "Special Mention." 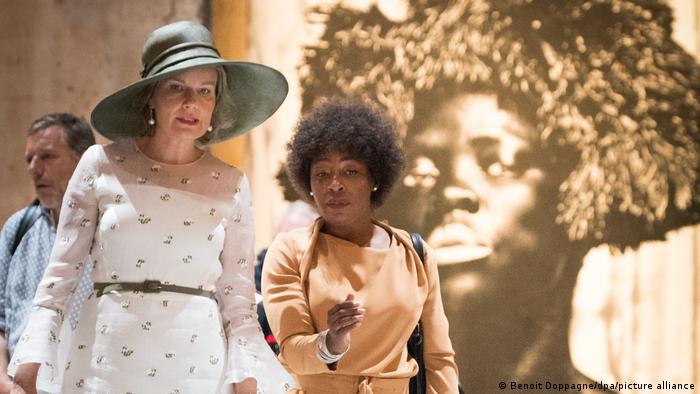 Nkanga joins a number of artists from Africa and Latin America at the top of the Kunstkompass' list of rising stars, including Tomas Saraceno from Argentina and Oscar Murillo from Colombia. Women artists are also strongly represented in the list.

Asked whether she sees herself as a political or social artist, Otobong Nkanga, who is based in Antwerp in Belgium, says that "I don't try to define what I am, I am not interested in definitions, I'm interested in what things do, how things reflect."

"I'm a poet. I'm a writer, an artist," she adds. "And I embrace all the different parts that I am. And so I wouldn't just say if it's political or if it's social, but I think it's everything that we do that has an impact on someone else's life can take a political or social economical form. It can take multiple forms."

There's No Such Thing as Solid Ground runs through December 13, 2020 at Gropius Bau in Berlin.

This article was translated from the German original by Stuart Braun.

On November 10, 1995, nine Nigerian environmental activists accused of murder were executed by Sani Abacha's military regime. Their deaths sparked an international outcry that lingers to this day.