If you're looking for a daring display of masculinity manifested in Berlin, just seek out the remnants of the Berlin Wall. Catapulting visitors back to the days of the Cold War, one look at this monstrosity reminds people how it was the ultimate phallic symbol that used to pierce through entire neighborhoods and divide an entire city, running almost 100 miles long.

One stretch of the wall still remains in the heart of Berlin, leading up to the Martin-Gropius-Bau museum in the center of town, which is now exploring the very concept of masculinity in an exhibition bringing together works from over 50 artists.

"Masculinities: Liberation through Photography" looks at various concepts both challenging and confirming male identities: from contemporary concepts like toxic masculinity to age-old ideas pertaining to fatherhood and the family man.

There's also plenty of room for queer identities and masculinities among people of color and other ethnic backgrounds, reflecting various movements and shifting perceptions of masculinity down through the decades.

Besides the photographic lens, the exhibition also employs the eyes of filmmakers to fully capture male images and iconography.

It is a man's world

The works in the show aim to "present masculinity as an unfixed performative identity shaped by cultural and social forces," reads the press release. But what does that performance exactly entail? With over 300 photographs, the exhibition seeks to examine that concept from every angle, just as societal trends around the globe reexamine their relationship with male identities. 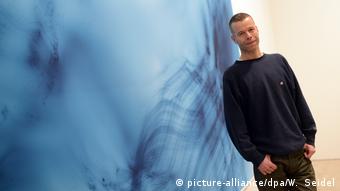 Whether it's the issue of patriarchy or variants of the "black is beautiful" movement among male populations of color, the exhibition starts off by boldly objectifying men — and their bodies, in particular — in a way that is more commonly observed in depictions of women, especially in the context of popular culture today.

Looking at men as something worth studying in terms of imagery seems almost unorthodox even in the #MeToo era, where women around the globe vociferously protest against being reduced to objects designed to give pleasure at men's disposal.

Viewing the exhibition's images, the thought emerges: Has some global patriarchy council perhaps first granted permission to objectify men in this manner? Or is mounting a show like this an act of rebellion in and of itself? At the same time, the museum becomes a space where commonly-held beliefs about masculinity and femininity are challenged, where expectations and perceptions are shattered;a place where a meaningful dialogue among about gender roles that goes beyond discussing genitalia and pronouns can even begin.

Read more: Singular 'they' crowned word of the decade by US linguists 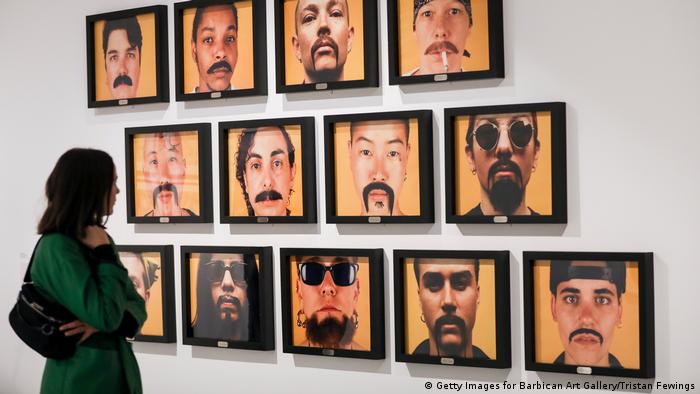 The exhibition at the Barbican explores the performative identity behind masculinities, blurring boundaries deliberately

Take, for example, color portraits of Taliban soldiers tenderly holding hands against flowery backdrops, their eyelids lined with a thick layer of khol. To be fair, men holding hands in that society may be nothing unusual — and the use of khol can serve purposes other than make-up, such as camouflage.

Nonetheless, these images provoke deep reflection about what makes a man a man. Photographer Thomas Dworzak compiled the images in 2001, as the insurgents depicted were preparing to fight the US-led offensive into Afghanistan. 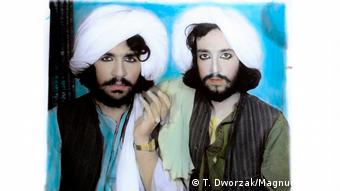 Their fate in the two decades since is unknown — but thoughts linger about them and the invasion of their country: was this truly a liberation or rather an act of aggression against people who had customs so strange to the Western eye that they are hard to conceptualize? Did they die perhaps in battle still holding hands or did a tear smudge that eyeliner as they watched their homes being bombed? The Taliban photo series raises questions that continue to reverberate in politics today. 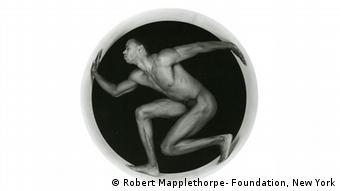 Robert Mapplethorpe's images explore the relationship between masculinities and race

The series "Gentlemen" examines men-only private members' clubs in London in the early 1980s. Reflecting on notions of class and race, the photographs underscore the exclusion of women from such spaces of power — during Margaret Thatcher's tenure as prime minister, of all times. These images, too, raise numerous questions:

Were such old boys' clubs like these a statement against the participation of women at the highest levels of politics? Did they reflect the fear that a woman might do a better job at the top than her male contemporaries? And did she?

It is also notable that the images were taken by the German-born American photographer Karen Knorr. Perhaps it takes a woman observer to address such issues about masculinities that men might be too complacent to raise. The show highlights the works of various women like Knorr in its question to fully examine male identities — including from the female perspective.

Queer identities and other subversive elements

The exhibition pays particularly close attention to queer imagery, as the gay liberation movement laid the foundation for many of the questions artists and society have been asking in the ongoing gender debate of recent decades. The intrinsic subversion of the early LGBTQ protest movement in particular has given material to scores of artists exploring what it means to challenge expectations of masculinity — and also what it means to comply with them.

Some of the men in the pictures look so quotidian that it makes gay look like the new straight — yet they were taken half a century ago during a time when homosexuality was considered illegal. These images show that challenging perceptions about gender can also mean normalizing what is perceived as exotic while deliberately singling out the mundane as "the other."

At the same time, Gupta's images from India during the 1980s show another side to male homosexual identities; examining a society in which gay behavior is often reduced and pushed to the margins of society, Gupta sets out to prove homophobes wrong; his photographs document that gay identities, too, are male identities. They're here. They're queer. And they're not going anywhere. 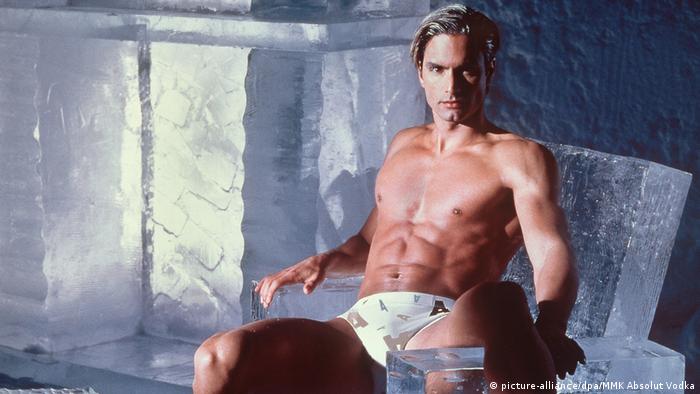 Supermodel Marcus Schenkenberg was among the first men to be completely objectified for the sake of selling fashion; this picture was taken by photographer Herb Ritts

Set a decade later, Catherine Opie's series "Being and Having" explores the LGBTQ community on the US West Coast in 1991. The models shown — her personal friends — sport tattoos and mustaches. The images question the role such stereotypical masculine fashion accessories play in identity issues. Are these models poking fun at male standards, or do these little accessories provide a guise that would allow them to "pass?" Is it macho — or it queer?

Beauty in the eye of the beholder?

Male images and the associations that commonly accompany them dominate the exhibition for obvious reasons. However, a somewhat disproportionate amount of idealized bodies, flawless physiques and heroic depictions also raise further identity-related questions at the exhibition.

Perhaps this is the next frontier for male identities: to embrace a more diverse and inclusive body-positive image — a trend that feminists around the world have long championed 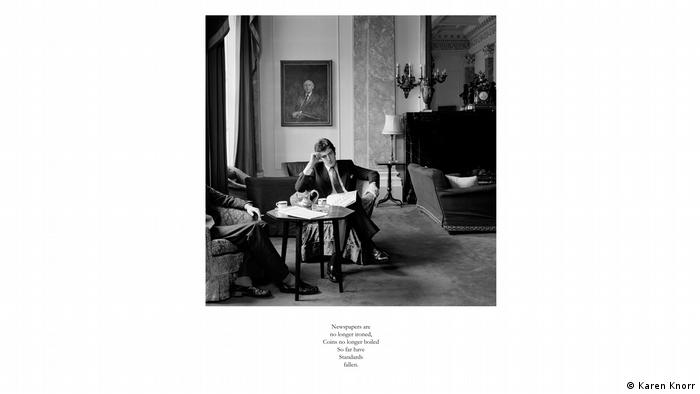 With private clubs, as captured by Karen Knorr, men in the UK have a certain tradition of seeking their own echo chambers

But above all, with its broad range of approaches covered and emotions conveyed, the exhibition showcases one particular dimension to masculinity that often goes overlooked and overheard in everyday life, as the debate on gender and identity continues: vulnerability.

Masculinities: Liberation through Photography runs at the Martin-Gropius-Bau, Niederkirchnerstraße 7, 10963 Berlin from October 16, 2020 to January 10, 2021.

As high fashion designers take their feminine styles to shops, straight men can now wear pink and man buns. But DW's Jan Tomes writes that the latest menswear trends are bland - and some verge on cultural appropriation. (20.06.2017)