As high fashion designers take their feminine styles to shops, straight men can now wear pink and man buns. But DW's Jan Tomes writes that the latest menswear trends are bland - and some verge on cultural appropriation.

When it comes to menswear, the past decade has been particularly exciting.

Although the British dandies paved the way for fashion as a modern social phenomenon in the 19th century and couturiers established the industry system just a few decades later, men themselves have often only enjoyed sporadic attention from designers.

But that has recently changed - and so has the meaning of menswear and masculinity.

"There are fashions today that are considered acceptable, at least in urban areas, that would have been dismissed as 'gay' earlier this century: the color pink, tight trousers, or the 'man bun,' though it's worth noting that that particular hairstyle has its provenance in samurai warriors and sumo wrestlers, not women," Anja Aronowsky Cronberg from the London College of Fashion told DW.

And judging from the ongoing Spring/Summer 2018 men's fashion weeks - which have taken place in London, Florence and Milan so far and will end in Paris on June 25 - this revised definition of masculinity continues to dominate the spectrum.

Bombers and tank tops, no jackets and shirts

Designers are going against all conventions this season, turning the staples of the classic male wardrobe, such as the suit, into a rarity.

Instead, the young British label Tourne de Transmission, which opened the London Fashion Week at the beginning of June, set the tone with alpine windbreakers paired with oversized shorts worn with Velcro sandals and white socks. Sneakers and kimono-inspired coats complemented the cartoonish take on the 1980s proportions at Topman.

Similarly, in Milan, even Ermenegildo Zegna, one of the torchbearers of Italian eleganza, proposed bombers and mesh tank tops as a substitute for jackets and shirts. Versace even did cargo pants.

"I think it's simply a sign of the times - the majority of men don't really wear tailored clothing outside of those professional situations that demand it," the editor-in-chief of "Style Zeitgeist" Eugene Rabkin told DW.

But Cronberg, who also edits the annual fashion journal "Vestoj," sees another aspect of the recent shift in men's style: "If you look at fashion history, you'll notice how clothing in the Western world has become ever more casual. Think of the early 20th century, when women still wore corsets and men starched collars, to the much more relaxed silhouette of the 1920s."

Thanks to new technology, she added, "we can create fabrics that stretch and shoes that allow us to run to catch the bus; it's no wonder we prefer leggings, t-shirts, and sneakers to anything that might rub or chafe against our bodies." 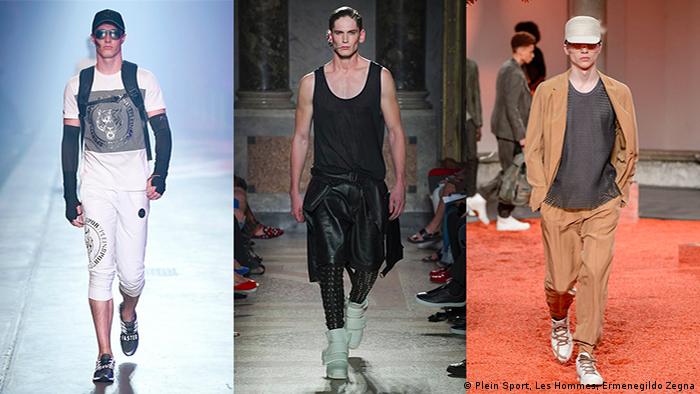 Comfort and fashion can go together

The constricted sophistication of a man's suit cannot compete with the liberating banality of the activewear that is omnipresent both on catwalks and in stores.

Designers seem to feel no nostalgia toward the three-piece. Rather than honoring it, Francesco Risso at Marni shred it into pieces in his latest collection and sent it down the runway, just like Demna Gvasalia at Balenciaga and countless others over the last few years.

Men in skirts kill two birds with one stone

But designers haven't stopped there while dismantling the traditional symbols of masculinity. Men's fashion has been adopting a great deal from womenswear - to the point that fashion shows have started to resemble défilés of boy-lolita gangs playing dress-up in their mothers' garments.

"Obviously, fashion brands need to generate attention, and in a crowded landscape, an unconventional design can get you that," commented Cronberg. "This way, a designer can see him or herself as more aligned with an artist than a mere rag-trader. Putting men in skirts kills two birds with one stone."

Yet, as Rabkin points out, such clothes have a very limited life span since they are not commercially viable: "They don't sell much outside of the clientele that has already been predisposed to wearing feminine clothes. By and large, catwalk fashion speaks to fashion people - the press and the buyers - and they operate in a bit of a bubble that allows for a more risqué approach to dressing."

The androgynous, gender fluid look is, nonetheless, still very much in as seen in London this season and will be undoubtedly put forward to the masses by global, low-cost clothing brands in subtle reinterpretations.

That trick has, however, penetrated designer collections as well. Last week in Florence, J. W. Anderson, the master of gender bending, who had previously presented male models in hyper-feminine outfits, offered a different, much calmer collection. The verdict was unanimous: "Finally something wearable from J. W.!" recalled Rabkin.

Wearable, toned-down designs, however, are generally less than exquisite, and the showcases in London, Florence, and Milan were bleaker than usual this June.

Even Prada, the Italian surname that singlehandedly reshaped the fashion of the last 25 years, succumbed to insipid, generic pieces embellished with manga imagery to create an ever-so-short moment of fashionable caprice this season.

This week all eyes are on Paris, then, which has established herself again as the source of avant-garde thanks to newcomers that do not shy away from exploiting the street and the underground.

While this approach has generated many trends that have dominated retail - the 1990s post-Soviet look, for instance - Rabkin warns about its cultural effects. Think samurai-warrior-inspired man bun. 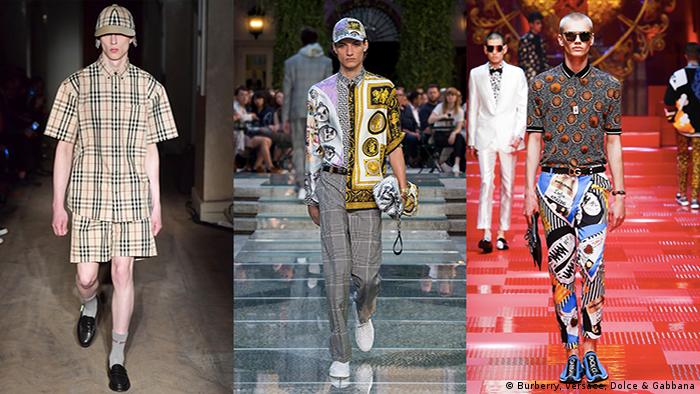 "Subcultures are dead," he claimed, saying, "Appropriation moves at the speed of light. It has become nearly impossible to carve out a space that will not be quickly co-opted by capitalism. The decoupling of visual codes from their cultural roots and the loss of meaning that goes with it is one of the most unfortunate developments in contemporary fashion. Consumption has become the easiest way to acquire meaning."

And, speaking of consumption, men do love shopping these days. According to the global market research agency Euromonitor, the menswear market is set to outpace womenswear in terms of sales by 2020.

But does it mean that men will put on every quip designers throw their way?

"'Real men' have not gone anywhere," asserted Cronberg. "Though lately there have been cries about masculinity 'in crisis' and the emergence of a 'new man' - an idea that the fashion industry has been quick to capitalize on -, a skeptic would point out that while men try on pussy-bow blouses and extra-long sleeves, the catalyst for this plethora of new looks might be more closely related to the ever-increasing commodification of everyday life and advances in marketing and advertising than it is to any kind of new man."

Fashion should always be taken with a grain of salt, added Cronberg. "Change happens for the sake of change: That's the mantra of fashion."

Logos are one of fashion's essential accessories, but do DHL and Golden Arches belong on the runway? In New York and at other recent fashion weeks, logos' substance and purpose have been reinvented. (13.09.2016)

Edward Enninful has been named as the new editor-in-chief of British "Vogue." He is the first man to take the top job in the iconic fashion magazine's 100-year history. (11.04.2017)

Men's fashion trends that will soon be hitting stores

From Milan to Paris, the latest trends in men's fashion have been hitting the runways this month. Whether you're into logos or jumpsuits, you can buy what we've spotted on Europe's runways. (20.06.2017)