Logos are one of fashion's essential accessories, but do DHL and Golden Arches belong on the runway? In New York and at other recent fashion weeks, logos' substance and purpose have been reinvented. 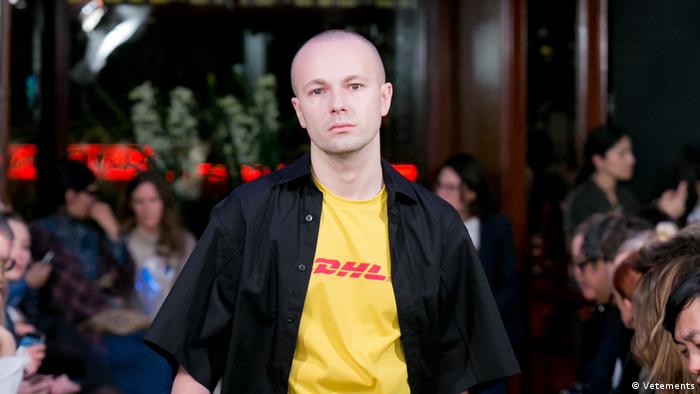 A Chinese restaurant in Paris' 19th arrondissement is hardly a typical setting for a fashion show, but last October, even Vogue's Hamish Bowles sat down on a creaky chair with faux leather upholstery to witness the presentation of the spring 2016 line by Vetements.

On the other hand, the red and blue neon signs flickering in the background, illuminating the ornamental, wooden-clad walls, provided a fitting environment to Demna Gvasalia, brand's founder and head designer, whose plan "is to disrupt the fashion system," as he's said on multiple occasions.

So no one was really perplexed when the womenswear spectacle opened with a man wearing a generic black shirt, a pair of leather trousers, Doc Martens high-tops and - most importantly - a plain yellow t-shirt with a red DHL logo on it.

The collection of oversized dresses, military jackets, and intentionally botched pop-cultural prints received rave reviews, and the t-shirt - the most coveted piece of the whole line-up - sold out almost immediately despite the 245-euro ($275) price tag. 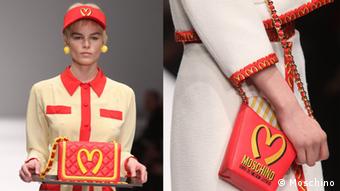 "These stunts are very much in line with the current fad for instagrammable fashion by fashion hipsters," says Eugene Rabkin, the founder of the StyleZeitgeist magazine and a teacher of critical writing at Parsons, hinting at the surge of mundane imagery that has appeared on the runways.

"For them, the Kodak or McDonald's logo becomes the logo of the brand which makes the garment," adds Rabkin. "It's the same mentality of being in the in club. The masses don't get it, but they do, and they can get instant approval on social media."

Logos play an essential role in fashion, and it's not a coincidence that its modern history began in 1858 with Frederick Charles Worth, one of the most prominent figures of the Parisian haute couture. He was the first designer ever to sew a label with his name into his creations.

"In the previous decade, however, we had a logo fatigue, and logos were seen as something vulgar," continues Rabkin. "They are now back, mostly due to the explosion of Instagram." 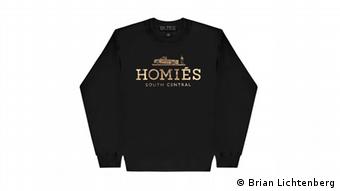 In 2012, US designer Brian Lichtenberg mocked the logos of traditional fashion brands

The renaissance doesn't necessarily take the form of the Prada triangle, the Louis Vuitton monogram, or the Gucci double-G pattern, although these names have obviously profited from the prevailing consumers' mood.

The post-financial crisis logo craze showed up dressed head to toe in mockery, conquering the streets in pieces reading "Féline" or "Homies" instead of Céline and Hermès, and, arguably, parody is the place where the Vetements t-shirt was born, too.

But, as Anja Aronowsky Cronberg, the editor-in-chief of the fashion journal Vestoj, observes, there is much more to this phenomenon than the fact that cool people love wearing ironic clothes.

"To me, it seems like a game of power," she said. "When it comes down to Vetements and DHL, it is quite obvious which of the two brands is cool and which isn't. And Vetements is asserting its power in fashion when they balance the scales, when they make DHL fresh."

How to get talked about 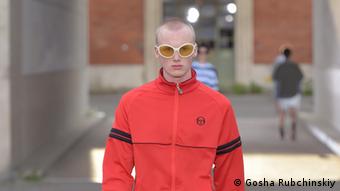 "Being in the spotlight, the fact that everybody is talking about you, is sometimes much more important to these brands than selling the actual clothes," says Cronberg.

"Firstly, because it helps to sell cheaper merchandise and accessories, and secondly because some labels will pay a lot of money for your name. There are designers who simply wouldn't survive from selling only their regular collections."

Sports icons on the runway

In Florence this past June, rough-looking skinny boys strolled down the runway in Fila sweatshirts, Kappa tank tops, and jumpsuits bearing the emblem of Sergio Tacchini when Gosha Rubchinskiy unveiled his latest men's line. They all looked like they'd just gotten off a charter flight from a Moscow suburb - which was probably the point - but the collection was the outcome of a mutual project between the young Russian designer and six Italian sportswear brands. 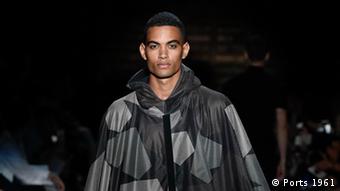 "I've always been sensitive to Italian history, art and culture, so I decided to collaborate with different iconic Italian brands that are as connected to the past as they are relevant today," Rubchinskiy remarks.

About a week later, Milan Vukmirovic, the French designer currently overseeing the men's line of Ports 1961, announced he had decided to invigorate the American boxing legend Everlast in his latest offering, and that he had done so with a logo-emphasizing capsule collection - a limited run which was later integrated into the brand's main line.

This past Saturday at the New York Fashion Week, leading local designer Alexander Wang revealed a limited edition of clothing he designed for Adidas. All garments de facto accentuate the three-leaf symbol, which Wang turned upside down.

In the end, everything stays the same

Is logomania officially back? It may seem so, but Rabkin suggests otherwise in his essay, "The Rise of Instagrammable Fashion," where he writes that logos have given way to graphics that are a subtler form of communication. 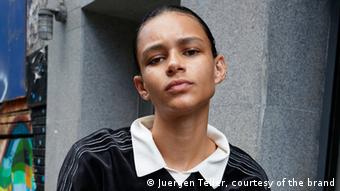 "In the age where information travels so fast and consumers want to be just a tad more sophisticated, graphics are the new logos," says Rabkin. "You don't have to dig deep, the way a true fashion fan used to, in order to recognize that the Rottweiler [print] is from Givenchy, the vampire embroidery on a varsity jacket is from Saint Laurent, and that 'Live Free, Die Strong' is from Comme des Garçons."

It doesn't mean logos are dead, however, but rather that while they were once untouchable, today their substance and purpose is constantly remixed and reinvented.

"Not so long ago, fashion used to be very much about minimalism, about Phoebe Philo's Céline - a very sleek, very sophisticated, highly exclusive and expensive look that was copied by luxury and mass brands alike," says Cronberg. "It was actually so minimal and exclusive that an uninitiated outsider usually didn't know it was so highly priced."

Vetements is similar, continues Cronberg. "If you show a Vetements garment to someone who doesn't know about fashion, the person won't probably understand why it's so pricey. I believe fashion always eventually shifts to its opposite end, but it's basically always the same."

US designer Tommy Hilfiger has made waves at New York Fashion Week by building a real-life carnival for his catwalk. He also launched his "click and buy" service, allowing clients to buy clothes instantly online. (10.09.2016)

Berliners can now purchase Kanye West's streetwear in their own city. DW's Mikko Stübner-Lankuttis found out why so many people waited all night to be the first inside the new pop-up store. (22.08.2016)

David Lebuser shows how skateboarding can be both a lifestyle and an extreme sport. The German champion in wheelchair skating gives workshops and helps de-construct stereotypes.