A drone operated by the OSCE's monitoring mission in eastern Ukraine was shot down after spotting a surface-to-air missile system in an area not controlled by the Ukrainian government near the Russian border. 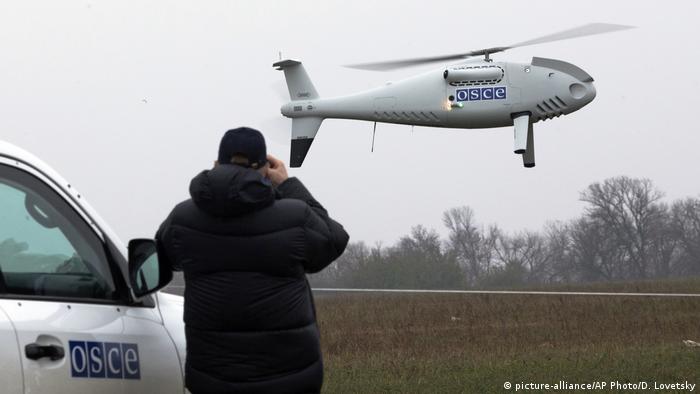 Germany and France said on Thursday that it appears that Russian-backed separatists in Ukraine had shot down a drone being used by the Organization for Security and Cooperation (OSCE) in Europe's Special Monitoring Mission to Ukraine (SMM).

In a strongly-worded joint statement released by Germany's Foreign Ministry, the two nations said the long-range drone had gone missing on October 27 at night shortly after having spotted a surface-to-air missile system in an area that was not controlled by the Ukrainian government near the Russian border.

"Evidence collected by SMM suggests Russia and the separatists it backs bear responsibility for the targeting and downing of the (drone), blinding the mission at this particular spot," they said.

According to a statement from the OSCE, "Prior to the loss of communication, the UAV ["unmanned aerial vehicle," or drone] had been flying in stable flight at an altitude of approximately 7,000 feet. The weather conditions were good with clear skies. All recorded flight parameters were normal and the UAV camera was recording."

Germany and France, which have been working with Russia and Ukraine in so-called Normandy Format meetings to bring an end to the conflict in eastern Ukraine, called the downing of the drone a "clear violation" of the terms agreed for the monitoring mission in Ukraine.

"This downing is a severe incident that stands in clear violation of SMM's mandate as adopted by all OSCE participating states," they said. "It constitutes an inadmissible culmination of continued interference, intimidation and restriction of SMM monitors' work, who act as eyes and ears of the international community on the ground."

In their statement, Germany and France noted that in recent weeks, their long-range drone "while being heavily jammed," had also observed convoys entering Ukrainian territory across a non-official border crossing from Russia on "multiple occasions."

Map of Ukraine with Crimea and Donetsk

The drone had been following a convoy of seven trucks near the Russian border, some 66 kilometers (41 miles) east of Donetsk, at the time it was lost, they said.

"Those responsible for such attacks on SMM personnel and equipment must be held accountable," they said.

The OSCE said that efforts to find the wreckage have been fruitless, but footage from smaller drones sent up to scour the area showed multiple wheel tracks in a field near where it was thought that the drone had gone down.

The conflict in eastern Ukraine erupted after a change of government in Kyiv and Russia's annexation of Crimea and has killed more than 10,000 people since April 2014.

A 2015 peace agreement signed in Minsk has helped reduce hostilities, but clashes continue.

More ceasefire violations have been reported in eastern Ukraine, with four soldiers killed in a fight with rebels. The latest truce deal between Ukraine and pro-Russia separatists had only been agreed a day earlier. (24.08.2018)