Honoring Denis Mukwege and Nadia Murad is the right thing but shows just how much more work still lies ahead, writes Dirke Köpp.

Congolese gynecologist Denis Mukwege and Yazidi activist Nadia Murad have each won this year's Nobel Peace Prize. Honoring two individuals who have spent much energy fighting sexual violence as a weapon of war sends a strong and important signal. And it somewhat makes up for the time when — oddly enough — the newly-elected US President Barack Obama won the Nobel Peace Prize. And also for when the EU was awarded the prestigious prize, which in light of today's refugee drama in the Mediterranean Sea seems almost farcical.

So celebrating individuals like Denis Mukwege and Nadia Murad, who are actively working to help others, feels absolutely right in times when it seems that man is indeed, wolf to man. 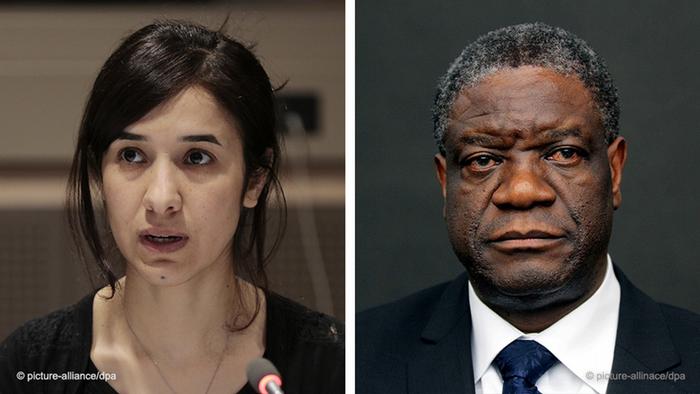 Two people who know the horrors of sexual violence

Mukwege and Murad have deep experience of what it means to suffer brutal sexual abuse. Murad was taken by the "Islamic State" terror organization as a sex slave and repeatedly raped. But she has refused to suffer in silence and speaks out openly about the systematic abuse. A bold and courageous step in a war-torn country like Iraq.

Mukwege, in turn, hails from DRC Congo's troubled South Kivu province, where he saw how rape was being used as a deliberate military strategy.

In 1999, he founded the Panzi Hospital in his home town of Bukavu. Here, Mukwege and his team treat and operate on women who have been raped and mutilated. He is affectionately called "the man who repairs women."

Anyone who has ever spoken to the women being treated in Bukavu, and who has looked into their eyes, understands the damage that rape as a weapon of war wreaks on its victims. They are scarred for life, suffering both physical and emotional pain. Sometimes, it is too much to bear. Women like Nadia Murad, who have the strength to overcome this pain and refuse to be treated like victims all their lives are rare. This is why Mukwege's hospital tries to help raped women and also restore their dignity — a daunting challenge given that in DRC Congo, women who have suffered rape are often stigmatized.

For a year now, there has been a global debate on the link between sexual violence and how it harms peoples' dignity. The #MeToo discussion has helped drive this debate. As has this year's decision not to award a Nobel Prize in Literature given the sexual abuse scandal involving certain members of the jury.

Much work still lies ahead

But there is still much that needs to change. Just think of the incumbent US president, who publicly ridiculed a suspected victim of sexual violence. Or full page ads featuring football star Cristiano Ronaldo wearing only his underwear, despite accusations that he committed rape. Or, more disturbingly yet, think of the Congolese man who was sentenced for raping babies, but allowed to officially run in an election. None of this is, to put it mildly, particularly sensitive towards victims of sexual abuse. So awarding the Nobel Peace Prize to Denis Mukwege and activist Nadia Murad is just the start.

The government of the Democratic Republic of the Congo, incidentally, has congratulated Denis Mukwege. But the award should make it hang its collective heads in shame. It illustrates just how badly the government and president Joseph Kabila, just like his father, have been neglecting the country's east. Since the early 1990s, armed groups have been terrorizing the population and raping girls, women and sometimes even men. With impunity. And the government does nothing to stop them!