Nikki Haley's departure from the UN is being framed as the Trump administration losing one of its few moderate Republicans and voices of reason. Her record disproves that narrative, however, writes DW's Michael Knigge. 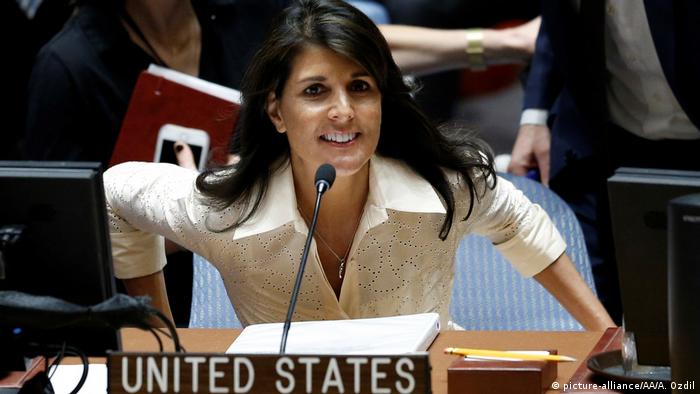 At this point it is almost moot to decry this White House's ongoing revolving door mentality. It is still unclear whether the amicable-seeming announcement of Nikki Haley's departure was long-planned, or if, notwithstanding her unprompted rejection, she might be plotting to run against Donald Trump for the United States presidency in 2020.

Ultimately, the speculation adds little to evaluating how the US has conducted itself on the world stage. Let's instead focus on what we do know, and that is Haley's record as US ambassador at the United Nations.

Put bluntly, her record is bleak. Sure, during her two-year tenure in New York she has given vocal support to certain human rights issues and was one of the more outspoken administration figures criticizing Russia.

But this is not what she will be remembered for. Haley, one of the earliest and most high-profile female members of Trump's Cabinet, will be remembered for what happened during her tenure: With her support, the US pulled out of the UN-backed international climate deal, the UN Security Council-backed Iran nuclear deal, the UN cultural organization UNESCO and the UN Human Rights Council.

She will be remembered for threatening other UN members via Twitter that the US "will be taking names" of nations that supported a purely symbolic resolution denouncing Washington's decision to move its embassy in Israel to Jerusalem.

She will be remembered for advancing a new and dangerous principle whereby the US only gives aid to nations it deems friendly, meaning that they have conducted themselves, and voted at the UN, in line with the Trump administration's positions.

And she probably won't be, but should be remembered for the fact that during her tenure Washington ended its funding for the UN Population Fund, the body's reproductive health agency, and reinstated the so-called Global Gag Rule that prohibits the US government from funding international health groups that also advocate for abortions.

Enabler of 'America First' on the global stage

Taken together, Haley has been an ardent supporter of Trump's "America First" policy, which openly advocates a winner-take-all approach that is fundamentally at odds with the core principles of the UN. Her personal style may have helped to cloak and blunt her full-throated support for Trump's hostile attitude to multilateralism — nevertheless, it was there.

In her defense, some might say that she was trying her level best to prevent Trump from doing even more damage, and they may warn that her replacement could be even worse — but that ship sailed a long time ago. At this point in the Trump administration's tenure, and considering all the damage that has already been done on numerous fronts, we simply cannot allow the argument that "it could be worse" to stand and serve as a benchmark.

By any traditional party standard, Haley cannot be described as a moderate or mainstream Republican. She has been the leading advocate for and enabler of Trump's politics on the global stage. There is no reason the world need shed a tear about her impending departure.

Nigeria receives US planes for Boko Haram fight 18h ago