US President Donald Trump has announced the resignation of the country's envoy to the UN. Nikki Haley, who had served since January 2017, is the latest in a series of high-profile departures from the administration. 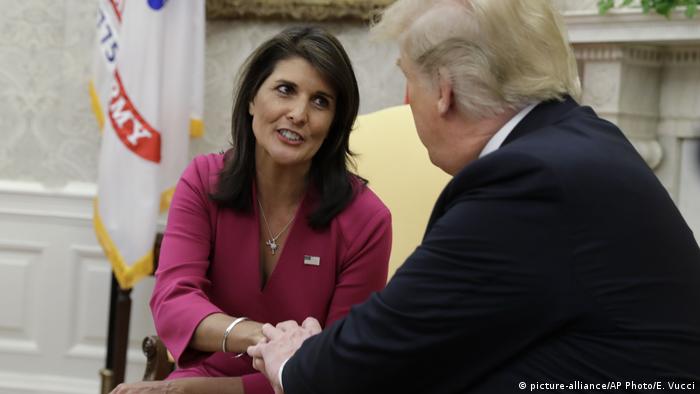 US President Donald Trump announced Tuesday that he had accepted the resignation of United Nations envoy Nikki Haley.

Speaking to reporters in the Oval Office, Trump said Haley would leave the administration "at the end of the year," adding that she had done an incredible job. The president said that together, they had "solved a lot of problems."

"We hate to lose (you)," Trump said. "Hopefully, you'll be coming back at some point. Maybe a different capacity. You can have your pick."

No reason for the resignation has yet been provided. Haley insisted she was not planning to run for president against Trump in 2020, saying only that being ambassador had "been the honor of a lifetime," and that it was "important to understand when it's time to stand aside."

Her departure is being seen as a blow for the White House just weeks before the US midterm election. Haley's is the latest resignation in a leadership team with a relatively high turnover — Trump has already lost one secretary of state and two national security advisers.

Read more: Is the UN facing budget cuts under Trump?

DW's Washington correspondent, Maya Shwayder, described the resignation as a big loss, saying that Haley was a well-respected diplomat within the administration.

Trump presses for reforms at the United Nations

Before being chosen as Trump's ambassador in November 2016, Haley, 46, served as governor of the state of South Carolina — the first woman to hold the post. As governor she was a vocal critic of Trump's remarks on immigrants during the 2016 presidential campaign. She also gained a reputation as a racial conciliator after leading the campaign to take down the Confederate flag at the South Carolina State House in 2015.

Haley's limited foreign policy experience made her a surprising pick for UN ambassador. In the role, she represented Trump's often unpopular agenda at the UN, advocating a hard-line stance on Iran, cutting the UN budget and leading the US withdrawal from the UN Human Rights Council after accusing the body of being anti-Israel. Last month, she coordinated Trump's first time chairing the UN Security Council.

UN Secretary-General Antonio Guterres expressed his "deep appreciation for the excellent cooperation and support" that Haley has shown, his spokesman Stephane Dujarric said.

Israeli UN Ambassador Danny Danon thanked Haley for being a "true friend" to the country. "Thank you for representing the values common to Israel and the United States," he said in a statement.

The top Democrat on the Senate Foreign Relations committee, Bob Menendez, said he was "deeply concerned about the leadership vacuum" created by Haley's resignation, and called it "yet another sign of the Trump administration's chaotic foreign policy."

Trump said he would name her successor in the next two to three weeks.

President Donald Trump has harshly criticized Iran in a speech at the United Nations, saying Tehran must change its behavior or face further consequences. Trump administration officials have also upped their rhetoric. (25.09.2018)

The US ambassador to the UN has described the draft resolution as a "grossly one-sided approach" to the conflict. The text requested a report from the UN chief on a "protection mechanism" for Palestinian civilians. (01.06.2018)

US President Donald Trump is shedding top-level White House employees faster than you can say "covfefe." Here's an overview of the main dismissals and resignations so far. (06.07.2018)