With a year to go until German parliamentary elections, foreign policy challenges will probably end up determining whether Angela Merkel wants another four years as chancellor, says DW's Jens Thurau. 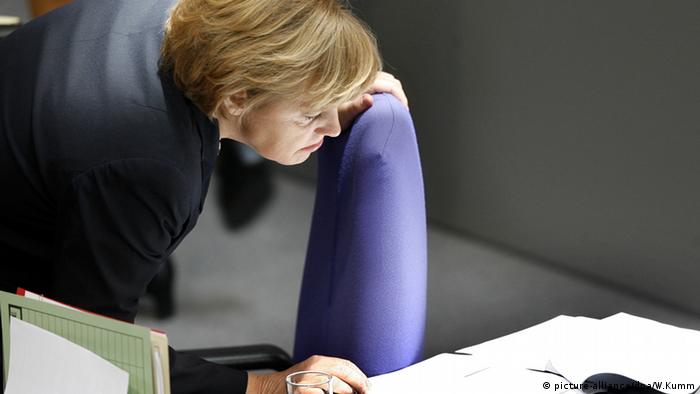 There is one general rule which German chancellors adhere to, if they stay at the helm of the country long enough. After starting in office focused on domestic matters they at some point try to turn into a proper statesman (or, for that matter, a stateswoman) and begin to get more involved in foreign policy matters. This is no different with Angela Merkel. But rarely has there been a German leader with so many fires to put out around the world as Merkel, or someone who holds so much responsibility.

After all, Germany has been in a comfortable position for some time now: part of a western alliance, while at the same time militarily unimportant and economically strong. If demands were made to the highest levels of German government in the past, generally, it just paid up.

Russia and Ukraine: Trying to prevent the worst case

But those times are over: look at the example of Russia and Ukraine for instance. As Europe's strongest player – both economically and politically - Germany, together with France, is trying to mediate the situation as well as possible. The Minsk Protocol and Minsk II agreements have not had the expected success, but one wonders how things would have gone if Merkel and French President Francois Hollande hadn't become involved.

There are nuances in the policy of the German government. Perhaps the left-leaning Social Democrat party, together with Foreign Minister Frank-Walter Steinmeier, would have been more willing to compromise with Russian President Vladimir Putin than Merkel's conservatives.

But basically, the German government is trying to use all aspects of diplomacy that it can, to prevent the worst case scenario. Still, as it is now firmly in the middle of the debate, Germany is being accused of a lack of progress and of suggesting the wrong solutions. The various foreign ministers meet regularly in Berlin's Borsig Villa, but so far without success.

Merkel's focus is the EU

Looking at the European Union, Merkel currently has Poland going against her, as well as Hungary. She also had to go through the Brexit debate recently, as well as Greece's public hatred of Germany during the European debt crisis. Whether her line of strict budget discipline and tough reforms was the right one or not, this is definitely one of the reasons for the alienation of the European concept.

And, thanks to Merkel's open attitude to the refugee question at the start, things have gotten out of hand. Right-wing populists are on the rise in many areas. A standardized, quota-aligned method for processing refugees across the EU is not possible at the moment. The result is a refugee deal with Turkey, a country which could cause the next foreign-policy headache for Merkel.

It is actually too much to manage at once. But Angela Merkel doesn't seem like she is panicking. Quite the contrary: she has recently reiterated that dealing with the refugee crisis is an important test for the EU. She seems to be saying: What is the EU good for - with its 500 million citizens – if it can't deal with caring for people arriving from a war-ravaged area?

Should the EU stop being an important world player because this question can't be answered, then Germany will also lose influence in time. That could, in turn, motivate Merkel to continue for another four years as chancellor. To resign at a moment like that, leaving others to clean up the mess, isn't really her style.

Stowaway survives flight from South Africa to Amsterdam 1h ago

Cameroon: Deadly fire breaks out at nightclub after fireworks explode 3h ago

Opinion: Why 2022 will be critical for Jews in Europe 10h ago