Jeb Bush can be happy with his visit to Europe. Not only did the leading Republican presidential hopeful avoid gaffes - he sent a strong message to the GOP field back home and a welcome reminder to Eastern Europeans. 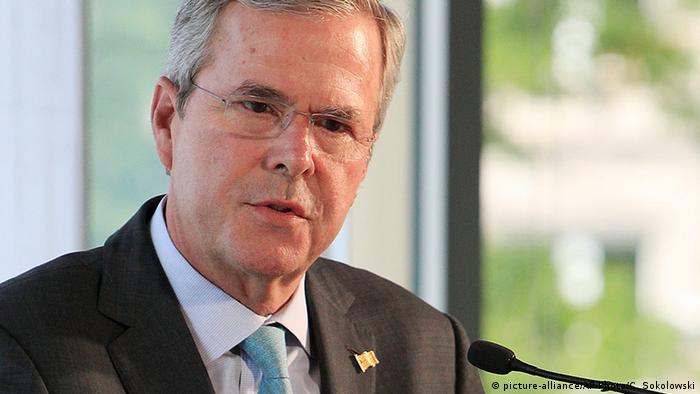 No, a few days in Europe did not turn Jeb Bush into a foreign policy expert. But neither did a similar trip here in 2008 by a candidate named Barack Obama. And he ended up winning not only the American presidency, but even the Nobel Peace Prize.

Being versed in the details of international relations can be an important asset to becoming US president. It is, however, not a prerequisite. Still, it is important - especially for the leading candidate of the Republican Party establishment - to show that one can navigate in the international arena and speak sensibly about Washington's role in the world.

Jeb Bush managed to do both. Again, he did not speak before 200,000 people in Berlin's Tiergarten Park as Barack Obama did in the biggest event of his entire campaign. Instead, Bush addressed a Christian Democratic Union (CDU) economic meeting in the German capital before some 2,000 attendees.

Obama is not the benchmark

But Jeb Bush's benchmark is not Barack Obama. That goes for most other Democratic or Republican candidates, too. That title belongs to Bush's more serious Republican rivals for the presidential nomination like Scott Walker or Chris Christie, or perhaps the GOP's most recent presidential candidate, Mitt Romney.

Bush bettered them all, which admittedly may not have been too difficult. Tea party favorite and Wisconsin governor Scott Walker simply punted on every foreign policy question he received during his UK visit earlier this year. His dodge on whether he believed in evolution made additional headlines. New Jersey governor Chris Christie didn't fare any better. His trip to Britain was dubbed a "disaster" by US media after he fumbled a question on immunization and snapped at a reporter. Even Mitt Romney - then the official Republican nominee - gaffed his way across London three years ago, as the Guardian put it.

Bush's message for the US

Jeb Bush did not visit Britain and he did not gaffe. Instead he embarked on Berlin, Warsaw and Tallinn. His public remarks in the three European countries he visited were neither surprising nor inspiring. Bush criticized President Obama's foreign policy, but not too hard as not to offend political etiquette. He lashed out against Putin and Russia. And he praised NATO and the transatlantic relationship.

Bush came prepared. He did what he had to do and what was expected of him. And simply by doing that, and by rearranging his campaign team shortly before he will officially declare his candidacy on Monday, Jeb Bush delivered a clear and timely message to his one dozen or more Republican rivals: he is the candidate to beat in what could be a brutal Republican nomination fight.

But Bush did something else. During his stint in Warsaw and Tallinn he delivered an equally timely and important message to a very different audience. He reminded the people of eastern Europe that if push ever came to shove, Washington is their best bet to get crucial support in a serious conflict with Russia - not Berlin, Paris or Brussels.

Not that most eastern Europeans have not figured that out themselves already. But amid reports of continued Russian meddling in Ukraine and a new, #link:http://www.pewglobal.org/2015/06/10/nato-publics-blame-russia-for-ukrainian-crisis-but-reluctant-to-provide-military-aid/russia-ukraine-report-27/:stinging reluctance# by majorities in Germany and France to help their NATO allies in times of crisis, it must be reassuring to hear a potential US president voice his support.