Opinion: Is the end of the German car republic nigh? | Business | Economy and finance news from a German perspective | DW | 05.06.2020

The country that was once governed by auto-industry-friendly chancellors is witnessing an end to bonuses for buyers of all new cars — except for the electric ones. DW's Henrik Böhme says that's quite a shift of paradigm. 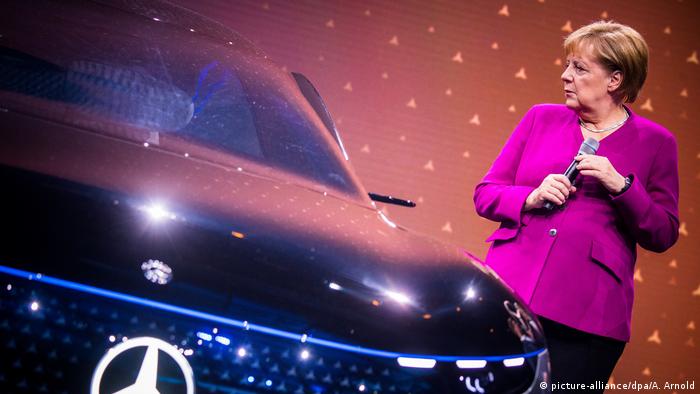 The bosses of Germany's carmaking companies were good at playing the grin-and-bear-it game. Volkswagen executives commented that additional bonuses to be granted for all-electric cars and hybrid vehicles were "an important stimulus."

Daimler called the political decision to grant more bonuses for electric cars "a good nonpartisan compromise." And the CEO of BMW noted the measure in question was "a meaningful step to accelerate the transformation process" in the industry.

In reality, though, the bosses will have been foaming with rage. After all, the prime ministers of the German states where the main carmakers are located had been rallying for bonuses for buyers of all cars.

But this time around, their attempts were to no avail as the government, for a change and rather surprisingly, did not bow to the mighty car industry lobby.

Let's recall for a moment how it usually went in the past. When the European Commission aimed to introduce tougher exhaust emission standards, German executives and their lobby organization VDA would go to Brussels to exert pressure.

Soon after, the German chancellor would appear there to do the same. In the end, the suggested tougher standards would be watered down to suit the interests of the automotive industry. It looks as if those times are now finally over.

That's what you get if you cheat

The car industry should have little reason to complain as it has had no small share in disgruntling policymakers as a result of its emissions cheating scandals. Politicians in Germany have been talking about a breach of trust and deny the industry its previous special status of treatment — a kind of preferential treatment that had never been bestowed on the engineering sector and others.

And so, the new coronavirus-induced stimulus package of the German government looks pretty future-oriented. It includes €50 billion ($57 billion) for research on the use of hydrogen technology, artificial intelligence (AI) and 5G mobile connectivity.

Only about €5 billion is allocated for buyers of environmentally friendly cars, more EV charging stations and research on battery cells. Machine builders are also to receive incentives for certain investments.

But back to the carmakers. The transformation process, which is in full swing in the industry right now, is certainly causing anxiety among employees. The coronavirus pandemic has added to those fears, with car sales plummeting and an end to the crisis not yet in sight. Only China has witnessed some market improvement so far.

But let's not forget that German carmakers had seen a very successful decade of record sales, enabling them to secure record profits. We're talking about €28 billion in the case of Volkswagen — so the carmaker would be superrich, had it not had to pay about €30 billion in the wake of its Dieselgate scandal.

BMW and Daimler had logged extremely good earnings, too. I'd be more concerned about the many suppliers depending on the fate of the big manufacturers.

Carmakers now have to live with the government's decision. Bonuses for buyers of new electric cars or hybrids will only be granted, if the vehicles in question do not cost more than €40,000. This means you won't be able to enjoy such bonuses if you want to buy, say, an Audi E-Tron or a Mercedes EQC, which cost at least €70,000.

There are still no really affordable electric vehicles available from German carmakers. Only a quarter of all models that would profit from bonuses are from German manufacturers, meaning that French and South Korean carmakers are far more likely to see a surge in sales because of the higher bonuses now in place.

Should we pin much hope on VW and its ID.3 to hit the market this summer? Well, right now, there are still many reports about software glitches. And it can't really hold the candle to Tesla's Model 3, which consumes 10% less power per 100 kilometers (62 miles). Tesla's Gigafactory being built just outside Berlin is giving German carmakers the shivers anyway.

No matter what you think about the ecological advantages and current technological shortcomings of electric vehicles, the German government's refusal to renew the old model of bonuses for all new cars seems to usher in a new era.

The automotive industry will remain crucial, but it won't be treated anymore as being more important than other big sectors employing hundreds of thousands of people.

Germany's Transport Minister Andreas Sheuer is proposing a multibillion-euro stimulus plan aimed at boosting investments in digital infrastructure and rail transport, according to a media report. (30.05.2020)