It's not just football-starved fans who'll watch the Bundesliga this weekend. It's blazing a trail as the first major sports league in Europe to resume play — but not everyone can follow, says DW's Matt Pearson. 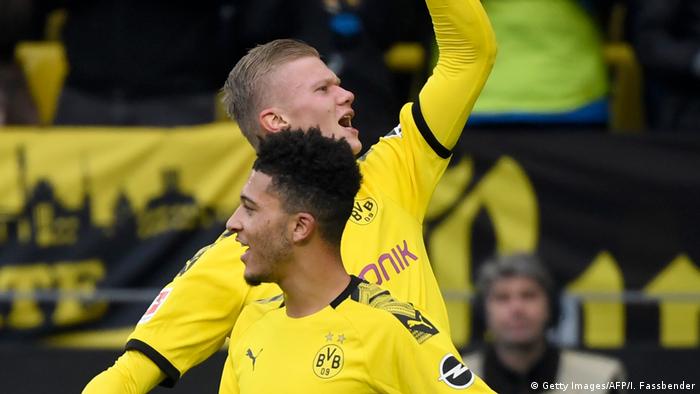 Whether you think it's a public health risk built on arrogance or a boost to spirits laid low by the coronavirus pandemic, a sustained, successful return for Germany's Bundesliga, its top football league, would be a good thing.

If it all runs smoothly, it could suggest that things are starting to get back to normal, right? Well, yes — but that seems close to impossible. Every day seems to bring a new problem and a new plan. There will be crises, the only question is how serious they are.

But football is coming back, and while most of those playing and running the game want their sporting fix, there's absolutely no denying that the main reason we'll be able to watch Borussia Dortmund vs. Schalke or Hoffenheim vs. Hertha Berlin on Saturday is money.

In a sense, that's entirely reasonable. As many as a third of the clubs in Germany's top two divisions will go bust if the season can't be completed. That's a lot of jobs on the line — not just the players but support staff, stewards, kitchen porters and ticket office administrators.

Football is far from the only business that wants to get its main revenue stream back, though the overreliance on TV money laid bare in recent weeks may provide a lesson to some. As in several other top European leagues, the pandemic has exposed the extent to which top flight German football relies on broadcast income over gate receipts, merchandise and other more traditional income streams. If the TV money tap ever dries up, many clubs will simply cease to be viable.

But not everyone sees this problem. Bayern Munich CEO Karl-Heinz Rummenigge was in bullish mood when asked about what the restart will mean for the league this week. "If the Bundesliga is the only league to be broadcast on TV around the globe, then I assume that we will have an audience of billions around the world," he said. Fair enough, if perhaps a little on the ambitious side.

But as he continued speaking to German tabloid Sport Bild, he touched on an issue that's more serious than a man pumping up the business that helps him pay the bills.

"This will not only be a promotion for our football, for the Bundesliga, but for the whole country and especially for German politics, which made this possible in the first place with its very good approach," he said. "When I was a young lad, 'Made in Germany' was a trademark. That has been lost somewhat in recent years. The relaunch of the Bundesliga also shows that 'Made in Germany' is once again an absolute seal of quality."

Though oddly jingoistic in tone and characteristically smug despite nothing having been accomplished yet, there is a kernel of truth in this. While Germany has had advantages, it has generally played its hand better than most in the current pandemic.

Even so, the risks of returning to football are huge and the ethics questionable. Many ask why footballers should receive preferential treatment, in terms of testing and medical care, though the DFL, who run the league, deny the estimated 25,000 tests required will leave any frontline medical staff without. Others argue that the players themselves are being hung out to dry, asked to perform a non-essential job in a health crisis. Only a few have been bold enough to express their reservations.

German politicians may have decided that its safe to play football without fans and with a strict and extensive set of hygiene and testing requirements, and they may be right. But politicians are, despite their insistence, often not right. There's every chance this could be the case again.

The danger of treating this as a success now, or even in five games' time, is that other leagues with their own financial imperatives will follow Germany's lead. The English Premier League seems particularly keen, for example.

But few seem ready or able to guarantee safety. Germany think they can, but they don't yet know it. They may not for some time. In a scenario familiar to all of us, this may well be the best bad solution available. But it should operate on its own terms. It's not a silver bullet, and it's not necessarily an example to follow.

Will Bundesliga restart be wortwhile commercially?

Professional footballers are returning to the fields in Germany to play their final matches of a stopped-in-time season. While controversial from an epidemiological stance, will the move be worthwhile commercially? (15.05.2020)

Though it's controversial, the Bundesliga's return this weekend makes it the first European league to restart. With all eyes on Germany, DW runs through the teams, players, coaches and culture of the Bundesliga. (12.05.2020)

The Bundesliga is free to resume in the second half of May, following a government announcement. Its return is being sold as an economic necessity, but it's a gamble that puts many at risk, writes DW's Michael da Silva. (06.05.2020)

Coronavirus: Are Bundesliga players at higher risk of injury on return?

Plenty has been made of the hygiene measures put in place for the resumption of the Bundesliga. But some in the game are also concerned that players are also at a far greater risk of serious injury than usual. (13.05.2020)

Jude Bellingham donned the Borussia Dortmund captain's armband for the first time on Saturday but couldn't prevent his team losing to Cologne. Head coach Edin Terzic had strong words for his players ahead of a big week.