Though it's controversial, the Bundesliga's return this weekend makes it the first European league to restart. With all eyes on Germany, DW runs through the teams, players, coaches and culture of the Bundesliga. 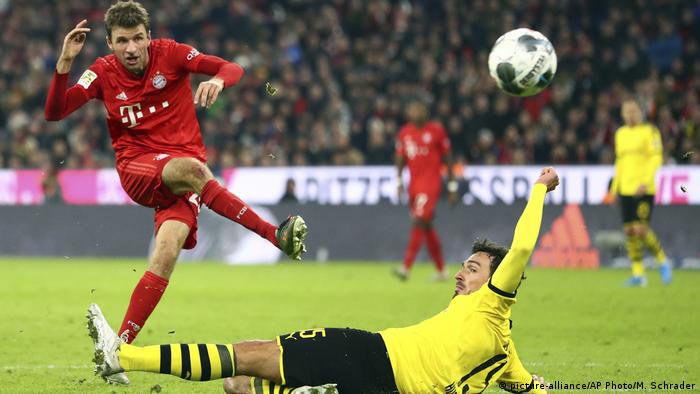 It will require disinfection every so often, but the ball is set to roll once again in the Bundesliga this weekend.

With almost every other top-flight football league either on hiatus or abandoned for the season due to the coronavirus, the Bundesliga seems certain to draw in a few new TV spectators who may soon become fans. With that in mind, here's a rundown of what you can expect.

Bayern Munich's run of seven consecutive titles has led some to dismiss the Bundesliga as a boring one-horse race. While that's been difficult to dispute in some recent seasons, it certainly has not been the case this term. Bayern struggled early and sacked coach Niko Kovac, allowing Borussia Mönchengladbach to fly out of the blocks into an early lead.  Borussia Dortmund and RB Leipzig have also topped the table, but both now trail Bayern after the champions enjoyed a resurgence under new boss Hansi Flick.

But just six points separate those four clubs and none of them are the finished article. Bayern have the advantage and the experience but have shown vulnerability. Dortmund are flaky but have the best array of young attacking talent in the world. RB Leipzig are inexperienced but full of exuberance, pace and purpose. Gladbach are a work in progress but capable of capitalizing on any slip-ups.

Read more: Opinion: RB Leipzig are top of the Bundesliga, and that’s not a good thing

Two points off that group, Bayer Leverkusen are arguably the league's most gung ho side and have already beaten Bayern and Dortmund, but they remain inconsistent.

Union Berlin's raucous fan base and direct, effective football have helped them close in on safety in their first season at the top, much to the surprise of many observers.

Freiburg continue to overachieve and win hearts thanks to their Black Forest location and down-to-earth, philosopher-cum-coach Christian Streich. Cologne, who've yo-yoed wildly between the top two divisions of late, found a run of form thanks partly to the suddenly-prolific Jhon Cordoba.

After Hamburg's proud record of never having being relegated was ended the season before last, their "Nordderby" rivals Werder Bremen are in danger of following suit. The Green and Whites sit eight points from safety and four from the relegation playoff spot (Germany has a two-legged tie between the third-bottom team in the Bundesliga and the third-top team in the second tier at the end of the season) despite an encouraging 2018-19 and a talented squad.

Hertha Berlin are more likely to survive but have become a circus despite a financial windfall. The 76-day reign of Jürgen Klinsmann, the suspension of Salomon Kalou for breaching coronavirus safety guidelines and more media leaks than points have them looking over their shoulders.

The stars of the season — so far

With a scoring rate better than a goal a game (25 goals, one every 82 minutes) , Robert Lewandowski would normally stand alone as the league's top scorer. But RB Leipzig's Timo Werner has almost matched the Bayern man, with a strike every 97 minutes (23 goals in total).

Where Lewandowski relies on movement, composure and power, Werner is about instinct and speed. But new kid on the block Erling Haaland looks to combine all those attributes, and his nine goals have come in just 509 minutes — one every 57 minutes.

In wide areas, Dortmund's Jadon Sancho and Bayern's Serge Gnabry have both kicked on even further this year. Both are decisive, intelligent, rapid, direct and thrilling and drive their respective teams forward. 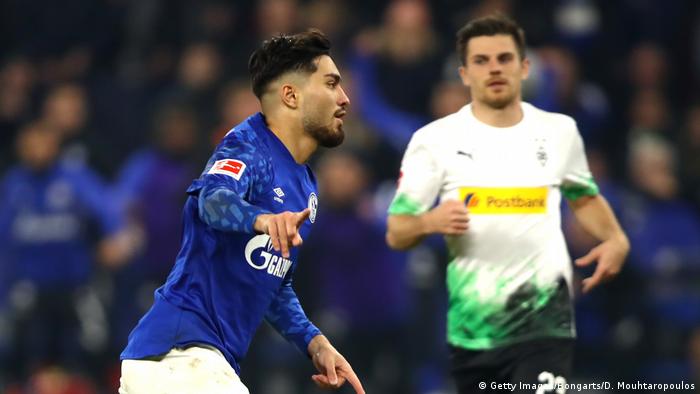 Suat Serdar has enjoyed a strong season so far with Schalke

Away from the big two, Filip Kostic, an excellent crosser with a sweet left foot, has excelled for Eintracht Frankfurt. Meanwhile, Suat Serdar, a throwback box-to-box midfielder with a deft touch, has impressed enough at Schalke to win a Germany call-up.

Sebastian Andersson's aerial power has been critical to Union, while Wout Weghorst has been an equally effective target man for Wolfsburg.

If Sancho, Haaland and Werner aren't enough for you, don't fret. With less cash sloshing about than other leagues, the Bundesliga has become one of the best stages for young talent to develop.

Canadian Alphonso Davies,19, has been an unexpected revelation at left back for Bayern Munich, seemingly capable of covering that whole flank on his own. RB Leipzig's Dayot Upamecano, 21, is one of Europe's most sought-after central defenders.

Kai Havertz, a gliding, gifted playmaker who is just 20 years old, has started to find his best form again at Leverkusen. The "Werkself" also have Moussa Diaby, a 20-year-old electric attacking talent, and 21-year-old defender Edmond Tapsoba, who made a big impact in a short amount of time following his arrival in January.

If some of the talent on the pitch is young and inexperienced, so too are several of the men in the dugouts.

Julian Nagelsmann took the Hoffenheim job at 29 and transformed them. Now 32, he's got Leipzig firmly in contention at home and impressing in the Champions League, with a comfortable two-legged victory over Spurs coming just before play halted in Europe.

Marco Rose, 43, has also started brightly with Gladbach, imposing his style early on. 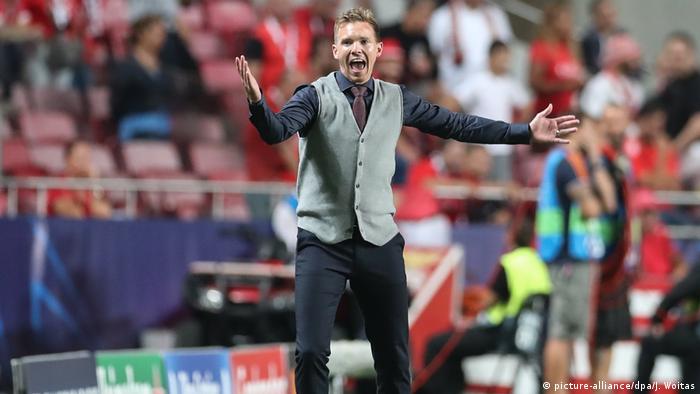 Julian Nagelsmann is one of Europe's youngest bosses

Bayern's Hansi Flick isn't so young but is thriving in his first real crack at a high profile job. The unassuming former assistant, 55, was part of the Germany setup when they won the World Cup in 2014 and has turned it around at Bayern, revitalizing Thomas Müller in particular.

Dortmund's Lucien Favre is the longest-serving and most experienced of the men challenging at the top, but some doubts remain about his organizational skills and ability to cope under pressure.

Old hands Christian Streich and Markus Gisdol of Cologne are also making a case for experience, while Bremen's Florian Kohfeldt and Steffen Baumgart, of bottom club Paderborn, are living off last season with their clubs the bottom two.

Though more substitutions may be allowed, teams will arrive separately and all the pregame rituals will be abandoned, it'll unquestionably be the absence of fans that'll be the most noticeable change come the weekend — particularly with Dortmund hosting Schalke in the "Ruhrderby," one of the country's most passionate rivalries.

While the fans are a critical part of the game in any league, it's particularly true in the Bundesliga. Relatively low ticket prices, close ties between clubs and fans and social activism are among the factors that make many German stadiums attractive to visit for fans both from the country and further afield.

A so-called "Geisterspiel," or "ghost game," between Cologne and Gladbach on March 11, just before the league stopped, gave us a taste of matches without atmosphere. It's football, but not as we know it.

Will Bundesliga restart be wortwhile commercially?

Professional footballers are returning to the fields in Germany to play their final matches of a stopped-in-time season. While controversial from an epidemiological stance, will the move be worthwhile commercially? (15.05.2020)

Coronavirus: Are Bundesliga players at higher risk of injury on return?

Plenty has been made of the hygiene measures put in place for the resumption of the Bundesliga. But some in the game are also concerned that players are also at a far greater risk of serious injury than usual. (13.05.2020)