Will Bundesliga restart be worthwhile commercially? | Business | Economy and finance news from a German perspective | DW | 15.05.2020

Will Bundesliga restart be worthwhile commercially?

Professional footballers are returning to the fields in Germany to play their final matches of a stopped-in-time season. While controversial from an epidemiological stance, will the move be worthwhile commercially? 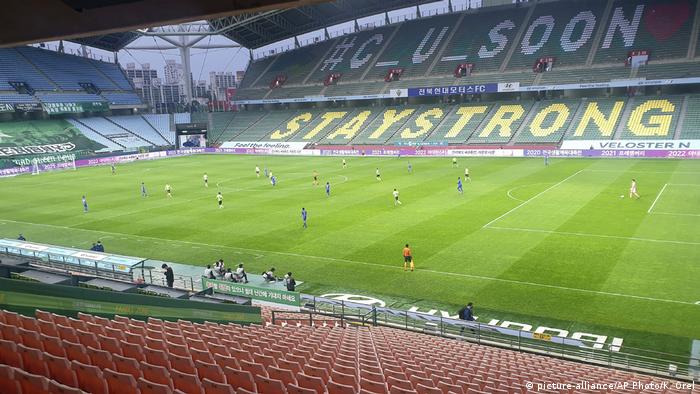 Suffering massively from the coronavirus-induced stoppage of the current Bundesliga season in March, Germany's professional football league DFL has been plotting a return to the field for quite a while, seeking exceptions from nationwide virus-fighting rules.

As the country's 36 first- and second division clubs are resuming matches this weekend, players won't have to wear face masks and keep distancing rules.

What appears to be only logical for a contact sport like football, is strongly debated among virologists and some parts of the German public, who argue the resumption of Bundesliga games sets the wrong signal and are comes too early in the pandemic, likely undoing the country's successes in the virus fight.

Even though the games will be played in front of empty stands, the critics lament that about 300 people, including players, coaching and medical staff, match officials and production staff will be needed for each game.

Heiko Herrlich, a renowned former Bundesliga striker and now coach of first-division club Augsburg, belongs to a group of people deemed to be at high risk from an infection. He survived a brain tumor some 20 years ago, but welcomes the football restart, saying he "accepts the risk" and is "looking forward to the new challenge ahead."

Germany's professional footballers and coaches like Heiko Herrlich may enjoy the return to their jobs, but the prime reason behind reopening the Bundesliga is strictly commercial, says Henning Vöpel, director of the Hamburg Institute for the World Economy (HWWI).

"The league's media partnerships have certainly exerted some pressure because the sale of broadcasting and marketing rights are a fundamental part of professional football's business model," he told DW.

Broadcasting and sponsorship deals are normally sealed before the season starts, meaning the league is forced to deliver its product, namely football matches, in order not to be held accountable or run the risk of losing its partners.

"In the end professional football is like a circle of interdependent players in a market based on the selling of and paying for performance," Vöpel says.

Germany's mass-circulation football magazine Kicker has published a survey this week, estimating the losses incurred by the country's professional clubs from playing in empty stadiums. Based on figures for last season, first-division clubs will lose a total of €67 million ($72.4 million) and those in the second division some €22.02 million.

The impact may be softened to some extent, Kicker reports, because fans may be willing to waive refunding for season tickets that include the last nine games they will be missing. Moreover, the clubs would also save money from paying less VAT tax on the season tickets partly refunded, the magazine wrote.

Economist Hennig Vöpel believes that playing games before empty stands is "better than not playing the games at all," — at least for the 36 clubs in the two top-flight leagues that derive most of their revenues from rights sales.

"Holding games behind closed doors in the third division and lower leagues is a much bigger burden for the clubs because they earn most of their income from ticket sales," he adds. 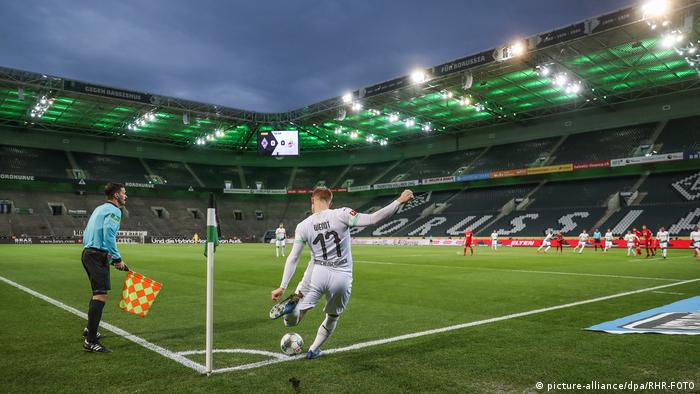 Even before the worldwide outbreak of the pandemic, a lot of clubs in German professional football had already been struggling, constantly hovering on the brink of financial collapse. Vöpel says it's a bad sign that many of the clubs' cash reserves last no longer than two to three months despite total revenues garnered by the league "in the triple-digit million region."

"This goes to show that finances in professional football are too tight," he says, and wonders why clubs are apparently overstretching their budgets to buy new players, rather than save money for a rainy day. The current crisis, he argues, should be seen as an opportunity to restore financial stability, which must be the prime task for league operator DFL in the future.

The first and so far only Bundesliga game played without spectators this season was a match between Mönchengladbach and Cologne on March 11 — a somewhat ghostly experience the players and team coaches agreed.

Vöpel also says such games are dramatically reducing the "event character" of the spectacle, and might inflict long-term damage on football. The sport's image now risks being tarnished further if a player catches the virus and spreads it, he argues, leading to canceled games and litigation with a view to undoing match results through the courts.

"The risk of resuming Bundesliga games under such conditions is big by all means," he believes.

Augsburg coach Heiko Herrlich shares Vöpel's view, and says German professional football would "score an own goal" if viewer rates fall for the television-only games now planned. He is convinced there are specific aspects to the sport that will decide about success or failure of the scheme.

"Are the battles on the pitch for real or will players shun duels? Are the games fought to the bitter end?" he wondered.

Amid the health crisis, deeper reaching-questions about the structure of German professional football are cropping up. Has the Bundesliga reached the limits of its effort to monetize the sport? Will regional identification and fan support play a bigger role in the game's future?

HWWI's Henning Vöpel believes quite the opposite will happen, meaning the last remnants of German top-flight footballing tradition could silently die off as a result of the crisis. Clubs might be more inclined to ditch the 50+1 ownership rule, as they are "struggling for their survival and seeking to boost their capital base," he argues.

German clubs have largely not attracted big-money investors in the same way as the Premier League in Britain, where foreign billionaires and oil-rich sheikhs have poured money into the clubs. That's largely because of a model that prevents commercial interests from owning more than 49% of a club.

But the crisis has led to suggestions that the regulation — one that is defended fiercely by fans but has long frustrated some club managers — may finally be lifted. Vöpel urges club managers not to cave in to such pressures.

"It's very important for professional German football to learn from the present situation and understand what really makes the sport so precious for the population as a whole."

Bundesliga kicks off again, but this time it's different

Will the coronavirus kill the heart of German football?