Some want to divert attention from shared interests to shared conflicts. This highlights the importance of years of cooperation to facilitate rapprochement, Welt correspondent Gerhard Gnauck writes from Warsaw. We were certain that the war had ended long ago. We watched as Germany, sometimes at the urging of outsiders, confronted the ghosts of its past. We witnessed tens of thousands of weddings between German and Polish partners. We listened to reports documenting historic levels of trade between the two countries.

Now, German President Frank-Walter Steinmeier is in Poland and Foreign Minister Sigmar Gabriel is on his way. Officially, Steinmeier is there to visit the Warsaw Book Fair. Behind closed doors there is talk of the sensitivity of the visit. 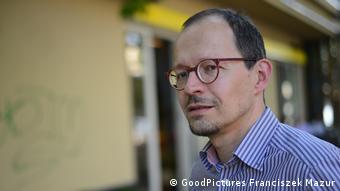 Gerhard Gnauck is the product of a German-Polish marriage: He is the grandson of a participant in the Warsaw Uprising and a German Wehrmacht soldier. He is a correspondent for the German newspaper Die Welt, and lives in Warsaw

Some magazines have taken the opportunity to run images of European Council President Donald Tusk, Poland's former prime minister and the current government's favorite enemy, in a Nazi military uniform next to Chancellor Angela Merkel (not in uniform). Complaints of being "subservient to Germany" are once again being heard in Poland. Before moving on to the European Union, Tusk got a taste of just how dangerous it can be when enemies start playing the "German card." During an election campaign about 12 years ago, his opponents from Jaroslaw Kaczynski's Law and Justice (PiS) party made a campaign issue out of the fact that Tusk's grandfather (after having been imprisoned in one of Nazi Germany's concentration camps) had been coerced into serving in the German army. Tusk lost the election.

Today, some politicians and publishers in Poland want to replace common interests with "shared conflicts." That makes it all the more important to recall what men and women, often eyewitnesses to war and, in one form or another, victims of the Nazi regime, have done to facilitate understanding between the people of both nations.

Coincidentally, two books on that subject have been published in the past year. The books compliment one another: One deals with Germany's encounters with its eastern neighbor, and the other with Poland's encounters with its western neighbor. If German-Polish understanding and reconciliation is seen as a priceless treasure in the eyes of the world, then each of these books is a tiny treasure trove.

Edited by the academics Dieter Bingen, Marek Halub and Matthias Weber, "Mein Polen - meine Polen" ("My Poland - My Poles") features short and amusing accounts of 43 Germans' first or most touching encounters with their neighbors. Three former presidents are included, among them Roman Herzog, who recalled in a lively and less-than-diplomatic tone that "Lech Walesa is a thoroughly spontaneous person: In military jargon one could say he is a swashbuckling trooper."

Artists featured in the book also have wonderful anecdotes to share. Anne-Sophie Mutter speaks of "happy encounters" and a "spiritual kinship" with the composers Witold Lutoslawski and Krzysztof Penderecki. A short text by the jazz musician Emil Mangelsdorff is especially poignant. In 1939, at the age of 14, he was sent to a Hitler Youth training camp in Masuria. He said teens there were being prepared to "take over farms in the conquered eastern territories."

On September 1 of that year, young Emil heard the thunder of cannons. Toward the end of the war, Mangelsdorff even had to fight in Russia. He eventually spent four years in a Russian prison camp. Many years later, in 1957, he was invited to perform at a jazz festival in Poland. A young man with a concentration camp prisoner number tattooed on his arm accompanied him throughout his stay. The two immediately took a liking to one another. "To this day, a bridge of memories connects me back to the time that the Nazi army invaded Poland," Mangelsdorff said.

Less essayistic and more academically ambitious, "Der du mein fern Bruder bist" ("You Who Are My Distant Brother") features 18 chapters, each devoted to a different well-known Polish personality. Their relationships to Germany, or to Germans, represent important, yet painful parts of their lives. They say it was often extremely difficult to be a "friend" to Germany, simply because of the social environment.

The book extends from Polish Prince Anton Heinrich Radziwill (1775-1833), an early defender of rapprochement, to Wladyslaw Bartoszewski (1922-2015), a prisoner at Auschwitz who later served two terms as Poland's foreign minister. The major tragedies of the 20th century seem to haunt many of the biographies in the book. Emil Hulewicz, a translator and friend of Rainer Maria Rilke, died in mass executions carried out by German troops in Warsaw. Tadeusz Mazowiecki, who, as prime minister, laid the foundation for new German-Polish relations with Chancellor Helmut Kohl in 1989, lost his brother Wojciech at the Stutthof concentration camp.

All of them, like Mangelsdorff, had "a bridge of memories" in their heads connecting them to the past. Yet that did not keep them from moving forward. We must take care, Germans and Poles, that the path to our shared future not be allowed to become once again overgrown with a thicket of hate speech and fake news.

Philippines: News site Rappler ordered to shut down 2m ago