EC President Donald Tusk has called on the ruling party in Poland to respect the constitution as two days of anti-government protests spread from Warsaw to other cities. New media rules sparked the dissent. 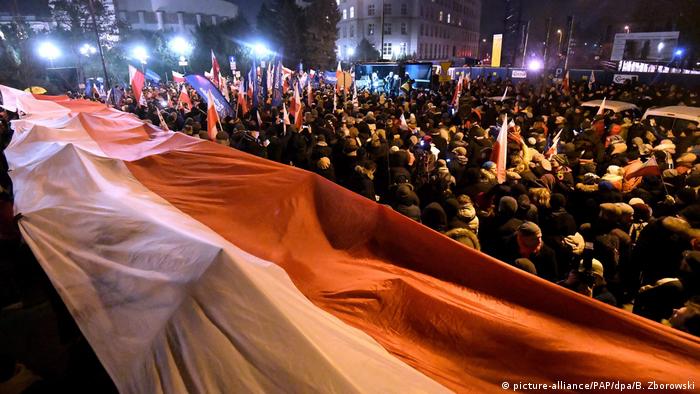 European Council (EC) President Donald Tusk has weighed in on Poland's political crisis, urging the ruling party to respect the constitution, the voters and the democratic process, as two days of anti-government protests spread from Warsaw to two other cities.

Demonstrators continued their protests outside the presidential palace and the parliament on Saturday over the government's plans to limit journalists' access to lawmakers in parliament.

A large spontaneous demonstration erupted Friday outside parliament against the conservative Law and Justice Party's policies under chairman Jaroslaw Kaczynski.

"I appeal to those who hold real power in our country to respect the people, the principles and values of the constitution, the standing procedures and good practices," Tusk said in Wroclaw, southwest Poland, where he was attending a cultural event.

The EC president warned that whoever was undermining the "European model of democracy" in Poland was "exposing us all to strategic risks."

Thousands of protesters in Warsaw chanted "Freedom! Equality! Democracy!" and waved Polish and European Union flags, a reflection of the pro-European views of many liberal, urban Poles who oppose the ruling party. 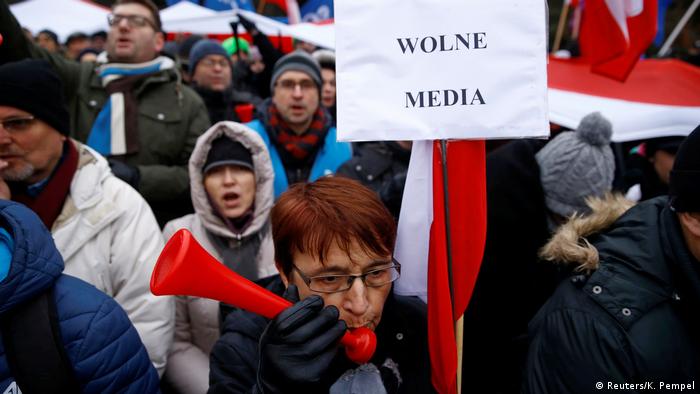 "This conflict is entering a new, more aggressive phase," said Szymon Roginski, a photographer who joined the protest with his two young sons. "Every day we hear news that makes us understand that we are further and further away from democracy. People have had enough."

Emerging from a long silence, Poland's President Andrzej Duda called for calm, expressing his "worry" over the turmoil and offering to mediate.

The ruling party, which has increased welfare spending, still remains popular with many Poles living on limited incomes in rural areas.

Among the protesters on Saturday, some chanted "Solidarity!" illustrating how many people link the current political crisis with the anti-communist opposition of the past. Other protesters held up copies of the constitution, while a large police presence guarded the parliament.

The protests were organized by the civic group Committee for the Defense of Democracy and two opposition parties, Civic Platform and Modern. Ryszard Petru, the leader of Modern, told the demonstrators in Warsaw that Poles would not accept the "dictators" who are trying to restrict the access of journalists to parliament.

Poland's conservative government is marking its first year of power with self-praise. The voters are still on its side. The US President-elect Donald Trump, meanwhile, is viewed with both hope and fear in Warsaw. (16.11.2016)