The chairman of the German Bishops' Conference, in the face of a growing abuse scandal, has said the Catholic Church has reached a "turning point." Anything else would be irresponsible, says DW's Christoph Strack. 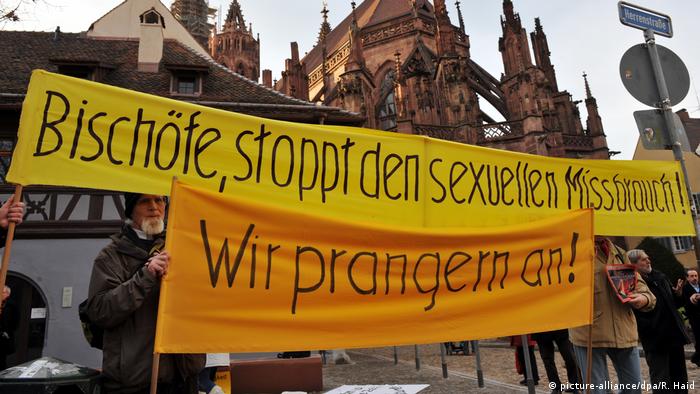 It's time to start over. Over the past few days, the Catholic Church in Germany has been shaken to its core by revelations about the extent of sexual violence within its ranks. Researchers commissioned by the Church but operating independently have been investigating abuse among men of the cloth for four years now. The results of their research indicate it is time for a change.

The glaring figures have been circulating in the media for two weeks: From 1946 to 2014, 3,677 adolescent victims and 1,670 accused clerics were found in the Catholic Church of Germany. But it's actually worse than that. These numbers are just a slice of the real figure — a "lower estimate." It is, as one of the authors says, "the tip of an iceberg, whose actual size we do not know."

The numbers call upon the church and the state. Both institutions must first take the victims into account. A lot has happened since 2010, when Germany was rocked by a scandal involving the abuse of students at a Jesuit school, prompting a wave of victims in other cases linked to the Catholic Church to speak out. But the study makes it abundantly clear that not every diocese is equally committed to change. So it is good that the relevant federal ministers admonish the church. And it is also good that they are not confining these demands to the Catholic Church alone.

Yes, behind every number is someone's fate. But the core of the study is not numbers. As in the case of the Titanic, it is not the size of the iceberg's visible peak that poses the greatest danger. It is what is hiding beneath the surface.

The chairman of the German Bishops' Conference, Cardinal Reinhard Marx, has said the Church has reached a "turning point." He says that there are power structures and a clericalism that fosters violence and abuse. The study is more precise. It mentions, with detailed justification, structures that can promote abuse: clerical power, celibacy, and the handling of sexuality, especially concerning homosexuality. It is a system that disregards sexuality, disregards homosexuality even more so and overwhelms its staff. The study does not say that celibacy is to blame. The most pressing issue is clerical overstepping and abuse of power. But is celibacy part of this problem?

It's about the character of the church

All of this is about the nature of the church, about its very existence. This is not just about the Catholic Church in Germany. But neither is abuse. Representatives of the victims say that wherever there is a church, there is also sexual violence by the clergy. And mind you, these aren't the words of people expressing their hatred of the church. The Catholic Church is currently mired in abuse scandals around the world.

And other countries — where it is still swept under the rug — will eventually be added to the list. So far, only the German bishops believe that researchers should expose these problems to the stark daylight. In doing so, they have rendered a service to the church as a whole.

The Catholic Church must reform. It owes that to the victims. But not only that. If it does not change fundamentally, it would be avoiding its responsibility. It's time to start over.