US grand jury: Predator priests in Pennsylvania had church protection

A two-year investigation found that more than 1,000 children were abused by clergy in Pennsylvania. The report said church authorities showed "complete disdain" for victims and protected the abusers. 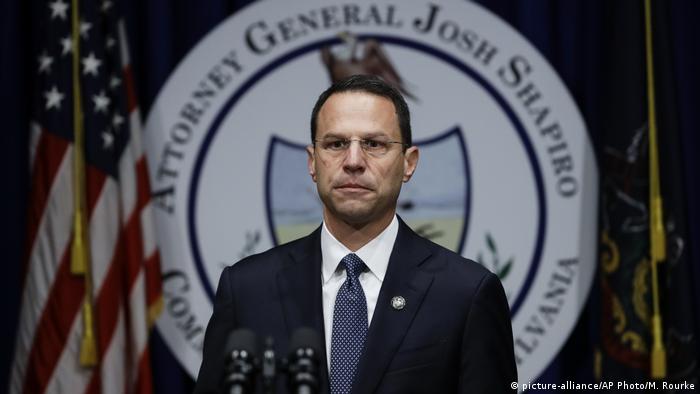 Pennsylvania Attorney General Josh Shapiro announced on Tuesday the findings of a grand jury investigation that detailed widespread preying on children and a "systematic cover-up" by the church hierarchy in the northeastern US state.

Authorities were able to charge just two, including a priest who has since pleaded guilty, Shapiro said.

The report was the result of a two-year investigation, where the jury heard from dozens of witnesses and reviewed more than half a million pages of internal documents from the dioceses of Allentown, Erie, Greensburg, Harrisburg, Pittsburgh and Scranton.

This included information from secret archives kept by the dioceses and even handwritten confessions by priests.

Over a thousand victims

More than 300 clergy have been implicated in committing abuse over several decades, beginning in the mid-1950s, the report said.

The grand jury has estimated that at least 1,000 children were victimized, though it believes the "real number" could be "in the thousands," as some of the records were lost and many victims were afraid to come forward.

The abuse resulted in many cases of victims traumatized for life, driven to drugs, alcohol and suicide, the grand jury said.

"It was child sexual abuse, including rape, committed by grown men - priests - against children," Shapiro said in a press conference.

Church looked after itself first

Some current and former clergy, who had been named in the report, went to court to prevent the release of Pennsylvania's grand jury results, claiming that it violated their constitutional rights to reputation and due process of law.

But Pennsylvania's Supreme Court ruled that the public had a right to see it, though it allowed the identities of priests and others who objected to the findings to remain sealed, pending a September hearing on the case.

The report did single out Cardinal Donald Wuerl, former bishop of Pittsburgh, saying he approved transfers for abusive priests instead of removing them from the ministry, oversaw inadequate church investigations and concealed information when priests were reported to law enforcement.

Wuerl, the grand jury said, advised parishes not to publicly announce or acknowledge complaints, and offered financial support to priests who had to resign due to the accusations.

In a statement Tuesday, the Cardinal said he "acted with diligence, with concern for the victims and to prevent future acts of abuse."

Cases too old for trial

Pennsylvania's grand jury report echoes the findings of other investigations around the US that have detailed widespread sexual abuse by clergy and church officials' efforts to cover it up. But due to its scale, it could be the single most comprehensive report to date into abuse in the US church, since The Boston Globe first exposed pedophile priests in Massachusetts in 2002.

Despite its implications, the majority of those found responsible in the Pennsylvania report are dead and the vast majority of crimes took place too long ago to prosecute, officials said.

Still, the grand jury hopes its findings can expose what happened in Pennsylvania, to make sure such widespread abuse is never repeated.

Between 5,700 and 10,000 Catholic priests have been accused of sexual abuse in the United States, but only a few hundred have been tried, convicted, and sentenced, according to the watchdog Bishop Accountability.

The US Catholic Church has spent more than $3 billion (€2.6 billion) in settlements since the abuse was made public in the 2000s.

Catholic bishops have apologized for failing the victims of sexual abuse after a weeklong leadership conclave. Chilean prosecutors are investigating hundreds of child sex abuse cases involving members of the church. (04.08.2018)