Opinion: Pope Francis wants change. But does the Church? | World| Breaking news and perspectives from around the globe | DW | 17.12.2016

Opinion: Pope Francis wants change. But does the Church?

This much is certain: The pope has pushed the Catholic Church in a new direction. But which direction is it exactly? 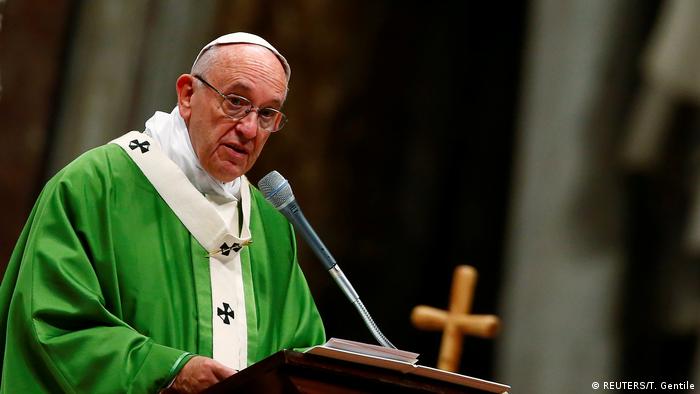 Pope Francis has been nudging the Catholic Church towards a kind of fledgling openness since his election on March 13, 2013. This break from history has been particularly meaningful for those who have experienced the Church's dark, burdened past.

From a more lucid perspective, the pope from the "end of the earth" has initiated more than than he has completed. Still, there is a palpable sense that he, in a highly Jesuit manner, has given greater definition to many outstanding issues. Since his first year as pope, Francis has shown his desire to set a tone, change tradition and serve as a distinctive model. He is not always successful, but even here he is transparent. Future Church historians will have much to say about this era.

The Argentinian pope is difficult to label as a pure liberal, progressive or "sensible" conservative. Francis is exclusive to none, and he has set clear boundaries during his 45 months as pope. At a Vatican gathering of women's religious orders in the spring, he in no uncertain terms rejected a women's blessing, and even a sermon, during Eucharistic mass. His predecessors could have hardly stated it more clearly. With his "Amoris Laetitia" (Joy of Love), Francis sets a new standard of responsibility for ministers with respect to ethical judgements and actions. In real terms, it deals with divorced, remarried women taking communion. In keeping with the core of Franciscan thought, compassion has re-emerged as part and parcel of ecclesiastical decision-making.

It is no coincidence that four conservative voices - Cardinals of a supposedly purist doctrine, such as former Cologne Archbishop, Joachim Meisner, and Bologna Archbishop emeritus, Carlo Caffarra - oppose the more open interpretation. The conflict is deepening due to the foundational significance it has for the Church. Francis envisions a church closer to regular people that is less focused on a layperson elite.

"I prefer a 'battered' church, hurt and sullied because it has gone out to the streets than a church that is sick because it clings to the safety of being shut off and comfortable." None of his critics would be able to utter such Franciscan thoughts.

A Church molded by the pope

It is therefore wrong to look only to Francis and celebrate him as the engine of renewal. No, this pope knows it is about changing the Church, the face of the Church, if it wants to get closer to people and take a fresh approach to the important questions of the day. It is clear he wants to continue to be a demanding and relevant figure. Pope Francis turns 80 today. It remains to be seen whether and how his courage and - an uncommon word for our times - his candor will leave its mark on the Church.

Candor means openness, and it is not about reforms under Francis, but reforming the Church. Some contributors to the debate suggest that the Church may not be ready for it.

Not to be pigeonholed: Pope Francis turns 80

His public appearances are unconventional, and he urges global solidarity. At times he causes controversy. He wants to reform the Catholic Church and bring it closer to the people. Pope Francis is turning 80. (17.12.2016)