Not to be pigeonholed: Pope Francis turns 80

His public appearances are unconventional, and he urges global solidarity. At times he causes controversy. He wants to reform the Catholic Church and bring it closer to the people. Pope Francis is turning 80. 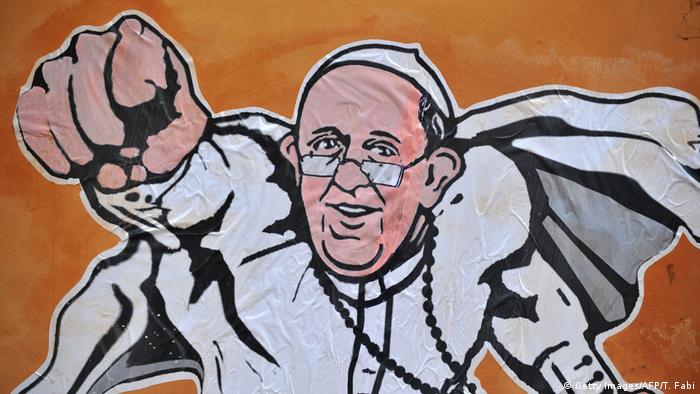 On an evening in December 2013, a friend invited me to Santa Marta, the Vatican guest house. In the evening, we sat in the last pew in the house chapel. A few rows in front of us, the most prominent occupant of the house, Pope Francis. The pontiff remained there for 20 or 30 minutes, his head at times resting on his hands. The man before us was less the leader of the Church, and more a man searching, struggling or in faithful prayer. Our short visit upon leaving was heartfelt and down to earth.

Pope Francis is the first Latin American pontiff, and the first Jesuit to lead the Catholic Church. He is also the first pontiff to have chosen the programmatic and obliging name Francis. In three-and-a-half years, Pope Francis, who turns 80 on Saturday, has also changed the Church and brought uncertainty to many within it. Before ascending to the Holy See, the Argentine Jorge Mario Cardinal Bergoglio was the Archbishop of Buenos Aires. He took the subway, carried his own briefcase and seemed more like the city priest. He took many of those habits with him to Rome. Whether in a children's hospital in the Italian capital, with refugees in Lampedusa or Lesbos, with inmates in Philadelphia's largest prison, with the people of the Bolivian highlands or the Central African Republic capital Bangui, or in earthquake stricken Amatrice in Italy: Even outside his Church, Pope Francis is seen as a moral authority and a voice for those suffering around the globe.

A message to the world

The fate of refugees, the homeless and the persecuted were the focus of his papacy from the beginning, and have become even more so over time. In the summer of 2013, he unexpectedly traveled to the island of Lampedusa off the coast of North Africa, directing the attention of wealthy countries in the North toward the quiet catastrophe of the thousands of human beings that lost their lives each year desperately attempting to reach Europe's shores. He admonished global leaders, and in late 2014, members of the European Parliament, who listened to his harsh criticism during a visit he made to Strasbourg. And when journalists and conservative church members laughed about Pope Francis taking in refugees at the Vatican or installing showers for the homeless next to St. Peter's Square, they failed to see the larger message behind those small steps. 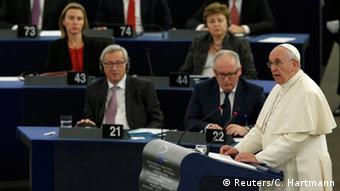 Pope Francis had harsh words for EU Parliamentarians in 2014

His journey to the Holy Land, in May 2014, was similarly symbolic and admonitory. Prayers for peace, calls for a ceasefire, a clear and unmistakable condemnation of arms sales - which he said only bring suffering: all messages that are part of who he is. The pope, who has yet to return to Argentina, has traveled to Asia and Latin America several times, and visited Africa as well. He has traveled to Cuba and the United States, where crowds in Washington, DC and New York celebrated as if he were a pop star. Yet he just wanted to deliver his message of empathy for the downtrodden and a strong criticism of the "globalization of indifference" to the US Congress and the United Nations.

Pope Francis tends to use an apparently simple, yet pithy and ambitious theological language. In doing so, he often evokes (many) images that cause irritation: As when referring to predecessor Pope Emeritus Benedict as the "wise old grandfather of the house," comparing Europe to "a grandmother that is no longer fertile" or saying Catholics do not need to reproduce "like rabbits." Those are pointed comments because Pope Francis wants to be pointed. 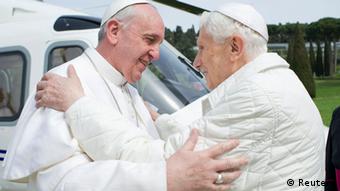 This pope wants large-scale and small-scale renewal. He does not seek to change Church doctrine, but rather - this much is clear - to put it on an evolutionary path toward a doctrine that once again focuses on people. Synods of Bishops on the topics of sexual morality and the role of the family in 2014 and 2015 were clear examples of that. In the 45 months that he has occupied the Holy See, he has been able to make a number of structural changes to the Curia - more changes may come. Other reforms are still in the developmental stage.

Such changes have brought criticism - seldom voiced and often held secret - from some parts of the Curia and in several European Bishops' Conferences. Initially, the conservative camp remained silent. But a few weeks ago, four well-known cardinals, among them, the former archbishop of Cologne Joachim Cardinal Meisner, thundered, accusing the pope of creating confusion. At issue was the Church's compassion for divorced and remarried persons. "Some still don't get it," as Pope Francis dryly noted in an interview. Those that see things in black and white terms, and want clear outlines and clear answers, don't have it easy with a pope that preaches mercy and often likes to avoid clarity in his public statements.

Criticism of the new idolatry

Recently, Thomas Müller, a canon law expert from Münster, appropriately summed up Pope Francis, saying that he "acts with great inner independence," and won't "allow himself to be pigeonholed." Even though the Catholic Church has indeed shown an ability to change over the centuries - slowly, mostly under pressure, yet sometimes out of prudence: March 13, 2013, was the start of a revolutionary development. 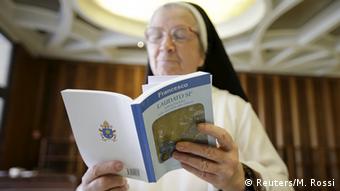 So far, Pope Francis has published two Papal Encyclicals. The first was the "Evangelii gaudium" (The Joy of the Gospel), in November 2013: "We have created new idols. The worship of the ancient golden calf (cf. EX 32:1-35) has returned in a new and ruthless guise in the idolatry of money and the dictatorship of an impersonal economy lacking a truly human purpose." Then came "Laudato si" (On Care for Our Common Home), in June 2013: This text on the environment and the protection thereof garnered respect around the world and influenced the UN Climate Change Conference in Paris a few months later.

Now Pope Francis is turning 80. That is the age at which cardinals lose their most important privilege, that of choosing a new leader to fill a papal vacancy. When he took the Holy See, many thought that he might retire at that age. But today, it seems clear that he intends on continuing to shape the post and change the Church even more.

At some point, a well-designed graffito appeared in Rome: On it, Pope Francis as Superman, briefcase in hand. "It seems insulting to paint the pope as a kind of superhero, a star of sorts," he once said in an interview. "The pope is a man that laughs, cries, sleeps soundly and has friends like everyone else. He's a normal human being." And a person that retires to prayer for half an hour in the quiet of his home's chapel, no doubt on his birthday as well.

Pope Francis has met with British physicist Stephen Hawking during a symposium for the Pontifical Academy of Sciences. Francis urged scientists to protect the environment in lieu of politicians who lack "concrete will." (28.11.2016)