Pope Francis has met with British physicist Stephen Hawking during a symposium for the Pontifical Academy of Sciences. Francis urged scientists to protect the environment in lieu of politicians who lack "concrete will." 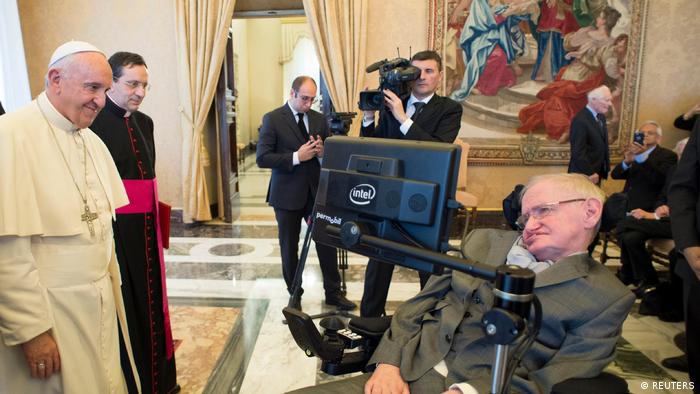 Hawking, the world-renowned physicist who has questioned the necessity of God in explaining the creation of the universe, came to the Vatican as a guest of the Pontifical Academy of Sciences on Monday.

The academy tweeted an image of the meeting, saying Pope Francis "blessed" and "thanked" Hawking for his commitment to the academy.

Francis implored Christians and scientists to join together "in the shared goal of protecting our common home, threatened as it is by ecological collapse."

He urged researchers to "work free of political, economic or ideological interests."

In contrast, Francis criticized politicians, questioning their "concrete will to seek the common good" and to implement global climate agreements.

The statements were likely a jab at US President-elect Donald Trump who has threatened to pull the US out of the Paris Agreement which binds countries to reduce greenhouse gas emissions.

During his campaign, he also doubted the existence of climate change, saying global warming was invented by China.

After being elected Trump softened his stance saying he is "open minded" about supporting global accords.

Hawking last visited the Vatican in 2008 for a science academy summit with Pope Benedict.

An Internet investor has enlisted Stephen Hawking and Mark Zuckerberg in his search for alien life. Breakthrough Starshot involves sending a swarm of tiny spaceships to the nearest star outside our solar system. (12.04.2016)

Stephen Hawking and Yuri Milner have launched an ambitious project to scan the heavens for intelligent extraterrestrial life. "In an infinite universe, there must be other occurrences of life," Hawking said. (20.07.2015)