Archbishop Carlo Vigano has launched a fresh attack on Pope Francis, urging him to resign. The accusation came as the pope concluded his trip to Ireland, where he begged for forgiveness for decades of Catholic abuse. 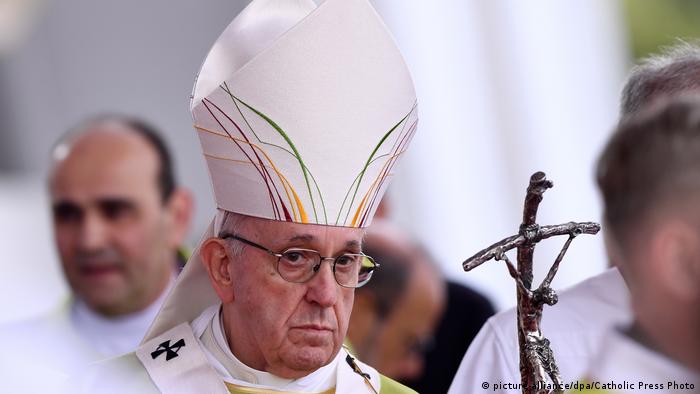 A former high ranking Vatican official has called on Pope Francis to step down, accusing the pontiff of knowing about sex abuse allegations against a prominent US cardinal for five years before finally accepting his resignation last month.

Archbishop Carlo Maria Vigano laid out his argument in an 11-page letter that was published Sunday in the National Catholic Register and another conservative site, LifeSiteNews.

The 77-year-old Vigano, an arch-conservative with strong anti-homosexual views, said he told the pope in 2013 that Cardinal Theodore McCarrick had faced voluminous allegations of sexually abusing lower-ranking seminarians and priests.

Vigano, who was the Vatican's ambassador to the US from 2011 to 2016, wrote that he told Francis: "Holy Father, I don't know if you know Cardinal McCarrick, but if you ask the Congregation of Bishops, there is a dossier this thick about him. He corrupted generations of seminarians and priests and Pope Benedict ordered him to withdraw to a life of prayer and penance."

Vigano added that he was surprised to see that shortly thereafter McCarrick began traveling on missions on behalf of the church. He reportedly went to China, and was known to have been one of the Vatican's intermediaries involved in the US-Cuba talks in 2014.

Francis on Sunday concluded his two-day trip to Ireland, which was dominated by sexual abuse in the Church around the globe and on the island nation.  It was the first papal visit to the country since 1979.

Speaking to reporters aboard the plane back to Rome, he dismissed the document and the accusations levelled against him.

He told reporters that he would  "not say one word" on the document ans suggested journalists read it themselves.

"I read that statement this morning. I read it and I will say sincerely that I must say this, to you and all of you who are interested: read the document carefully and judge it for yourselves," he said.

"I will not say one word on this. I think the statement speaks for itself and you have sufficient journalistic capacity to reach your own conclusions," he said.

Earlier on Sunday, the pontiff spoke out against sex abuse during a sermon at the Knock shrine in the west of the country, telling the crowd: "I beg forgiveness."

Rounding out his papal visit to Ireland, during a Mass at Dublin's Phoenix Park Francis also issued a sweeping apology for the abuse perpetuated and covered up by the Catholic Church.

"We ask for forgiveness for the persons in charge within the church hierarchy who did not take action in these situations and kept quiet," he told the tens of thousands of people in the crowd.

He vowed there would be no more cover-ups, and said the church would work assiduously to prevent such abuses in the future.

While Francis attended the Mass, thousands of people joined abuse survivors, their families and supporters in a solidarity march elsewhere in Dublin. Hundreds of others gathered in the western town of Tuam on Sunday to take part in a vigil at a former home for unwed mothers. An unmarked grave with the remains of an estimated 800 babies was uncovered on the site in 2014.

Confidence in church shaken by scandals

A cascade of child sex abuse scandals dating back to 2002 — and a then-shocking expose by the Boston Globe newspaper — have shaken the foundations of the 1.2 billion-member Catholic church.

McCarrick is the first Cardinal in living memory to resign his position in the church's hierarchy. His departure came after a review found that allegations he sexually abused a 16-year-old boy were credible.

He is also one of the highest-ranking church officials to face child sex abuse allegations. Cardinal George Pell, the Vatican's third-highest ranking official, is currently on trial in Australia where he faces similar sex abuse charges.

The latest revelations emerged earlier this month in the US state of Pennsylvania, where a grand jury report found that 300 priests had abused more than 1,000 children over 70 years across six dioceses.