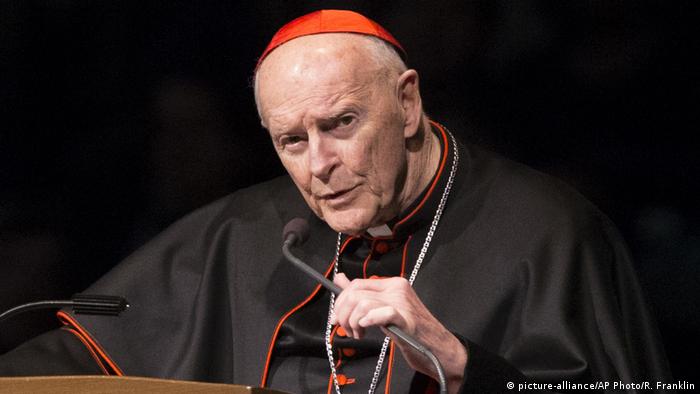 The Vatican said on Saturday that Pope Francis had accepted US Cardinal Theodore McCarrick's offer to resign from the College of Cardinals.

A statement said the pope had received a letter of resignation from the former archbishop of Washington, D.C., a day earlier, following allegations of child abuse dating back to the 1970s.

The pope had earlier suspended McCarrick — one of the US Catholic Church's most prominent figures — from the exercise of any public ministry. The new statement said the 88-year-old cardinal had been ordered to "remain in a house yet to be indicated to him."

McCarrick was commanded to conduct "a life of prayer and penance" until the accusations against him are examined in a Catholic Church trial.

In June, a Catholic Church review board found "credible and substantiated" evidence that McCarrick, while a priest in New York, had fondled a 16-year-old altar boy.

An attorney for the alleged victim claimed two incidents took place at St. Patrick's Cathedral in 1971 and 1972, and that in at least one of them, McCarrick unzipped the boy's pants and put his hands inside.

The church has subsequently admitted that McCarrick had faced previous accusations of sexual misconduct toward three adults and that financial settlements were reached with two of the alleged victims.

Several men claim the cardinal had forced them to sleep with him at a beach house in New Jersey when they were adult seminarians studying for the priesthood.

The Catholic Church has been rocked by thousands of allegations of child sexual abuse by its clergy in numerous countries and has repeatedly apologized after acknowledging that it covered up the extent of the wrongdoing for decades.

Evidence of abuse by priests, monks and nuns began to emerge in the 1980s, especially in Ireland, Australia, the US and South America, and has become more widespread over the past 20 years.

The church has faced further censure for its lack of transparency in investigating many of the cases and for often moving those priests at the center of accusations to other parishes, where their abuse continued.

In 2004, one Vatican report acknowledged that 4,392 clergy faced child abuse allegations in the US alone.

Last year, Pope France admitted the Vatican had a backlog of some 2,000 sex abuse cases.

Lawmakers in Canada called on Pope Francis to publicly apologize on behalf of the Catholic Church for its role in boarding schools that abused aboriginal children. The pontiff has said he can't "personally respond." (02.05.2018)

The Vatican has dismissed a deacon in central Chile over child sexual abuse allegations. The country's influential Catholic Church is facing a widespread abuse scandal that has put Pope Francis under pressure. (21.07.2018)

Australian Archbishop Philip Wilson has been charged with covering up sex abuse by another priest during the 1970s. He maintains his innocence and has refused to resign from his role as archbishop in South Australia. (19.07.2018)

Australia's most senior Roman Catholic cleric, Philip Wilson, has been sentenced to a year's detention for covering up child sex abuse by a priest. It is a landmark case and has been hailed by survivors of abuse. (03.07.2018)