Opinion: Biden's more popular than Trump — is that enough?

Joe Biden has received much praise from the US's allies. At home, he has an approval rating of 54% after his first 100 days in office. This is the moment for him to consolidate his political power, DW's Ines Pohl writes. 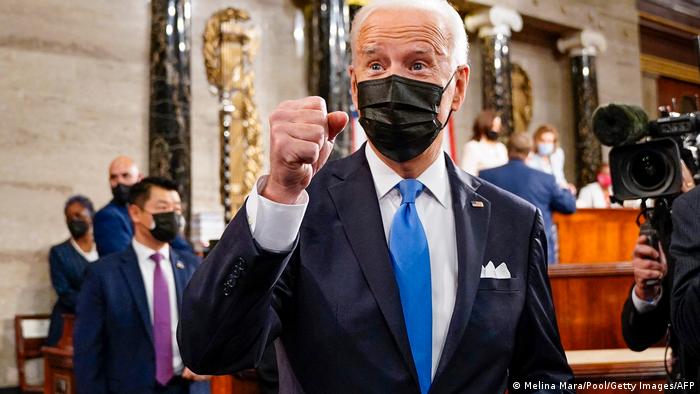 Biden has taken to the US presidency with vigor, but Democrats need numbers, too

The leaders of the US's historical allies have been particularly enthusiastic in their applause for President Joe Biden. The 78-year-old has displayed more energy in his first 100 days in office than many much younger people can dream of. The new man at the reins of the US government has a clear agenda and he is moving along with it.

For domestic policy, Biden has tools at his disposal that his equivalents such as the German chancellor do not. He can bypass Congress by issuing executive orders to enforce unilateral decisions. On day one of his term, he did just that and returned the US officially to the Paris Agreement on climate change.

Executive orders are not legislation and require no approval from Congress. The president has since signed 40 such directives. The problem with ruling by executive order is that a president's successors can undo decrees with the stroke of their own pens.

The Democrats enjoy only a very slim majority in both the House of Representatives and the Senate. To get regular bills passed, the Democrats need the support of at least some Republicans.

Nobody outside of the United States should forget this when applauding Biden.  Yes, his infrastructure plan would give a much-needed modernizing to the United States that could leave many EU countries far behind. And, yes, his pledge to confront climate change could have positive effects for the United States and the world.

But will his plan even get through Congress? Can Biden get a majority of legislators to back his proposal to tax the rich more? Does Biden have the power to effect real change? There is a discrepancy between the expressed desire to shape global policy and his real capacity to radically change domestic politics in the United States.

The midterm legislative elections are just 18 months away. Will the Democrats still have a majority in the Senate after November 8, 2022? Biden may be doing much better in the polls 100 days in than his predecessor was, but the United States remains a deeply divided country.

Biden is already on the campaign trail. He is presenting the US as a reliable partner to its international allies, but his focus is on the domestic situation. If the Democrats are to have any chance of winning the next election, Biden has to succeed at home.

Germany's trans-Atlantic Coordinator: We can build a 'New West'

Canada: Bishops apologize for abuse of Indigenous children 46m ago

US hosts 'The Quad' summit of Indo-Pacific leaders 1h ago