Biden says US is 'on the move again'

Marking his 100th day in office, Biden outlined his plans to help lift Americans out of poverty and dismissed the notion of "trickle down economics." 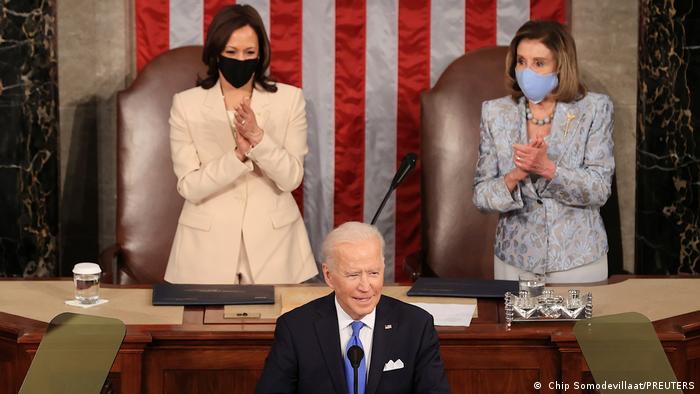 President Joe Biden proclaimed that "America is rising anew" and is on the verge of overcoming the historic pandemic. The US leader made the remarks on Wednesday night in his first address to a joint session of Congress, which marked his first 100 days in office.

Much of Biden's remarks focused on income inequality, lambasting large corporations for not paying taxes and pointing to the growth of wealth at the top during the pandemic.

He called on US companies to "pay [their] fair share" and pledged not to raise taxes on the lower earners. The Democrat president also slammed the theory of "trickle-down economics" popularized by Republican Ronald Reagan in the 1980s, saying that the idea of cutting taxes for the wealthy "has never worked."

During his speech, Biden called for trillions of dollars to rebuild the US middle class and its "forgotten" workers after the pandemic.

US 'ready for takeoff'

The televised address was one of the most watched moments of Biden's presidency so far. Biden hopes that his message will help him sell his plans to voters of both parties, even if Republican lawmakers prove resistant.

Lauding the success of mass vaccination against COVID-19, Biden told Congress and the nation that "in America, we always get up."

"America is ready for takeoff," he said. "We are working again, dreaming again, discovering again, leading the world again. We have shown each other and the world: there is no quit in America."

The president used the opportunity to make his pitch directly to Americans for his vision to rebuild the nation's physical infrastructure like roads, bridges and pipelines as well as improve public education, among others.

Biden argued that a new spending and tax-credit package, which — together with an earlier infrastructure and jobs plan — totals around $4 trillion (€3.3 trillion), is a once-in-a-generation investment vital to America's future.

The president stressed the need to pass his American Jobs Plan if the country is going to sustain momentum and get back to the historic low levels of unemployment prior to the pandemic.

He also framed his push for the US to take action against climate change as, ultimately, a jobs plan.

"For too long, we have failed to use the most important word when it comes to meeting the climate crisis,'' Biden said. "Jobs. Jobs. For me, when I think about climate change, I think jobs."

Furthermore, Biden said working class Americans had been ignored and that his plans would give them a chance.

"You feel left behind and forgotten in an economy that's rapidly changing. Let me speak directly to you," Biden said, before going on to promise Americans "good-paying jobs that can't be outsourced."

The president also urged Congress to increase the minimum wage to $15 per hour. "No one should work 40 hours a week and still live below the poverty line," he said.

Biden also urged giving Medicare — a US government health insurance program that mostly covers people over 65— the power to negotiate lowering prices for prescription drugs. "That won't just help people on Medicare — it will lower prescription drug costs for everyone," he said.

US 'not looking for conflict' with China, Russia

When it comes to foreign policy, Biden underlined Washington's push to rebuild alliances worldwide after the fallout of his predecessor, Donald Trump.

Biden said he was not seeking conflict with China or Russia. While pointing to Washington's renewed focus on diplomacy, Biden nonetheless pledged to be firm against both powers.

Biden said he told Chinese President Xi Jinping in a two-hour first phone conversation after taking office that "we welcome the competition — and that we are not looking for conflict."

"But I made absolutely clear that we will defend America's interests across the board," he said.

German politicians reacted quite positively, although much of the praise stemmed from the negative impression Biden's predecessor Donald Trump left.

Interior Minister Horst Seehofer said: "Overall I like this political style, it's factually oriented, it doesn't shy away from difficult topics and doesn't revert to actionism." Overall he approved of Biden’s first 100 days, giving him "a good grade."

Marco Buschmann from the business-friendly FDP agreed saying it was a "huge advance to be able to talk to someone who is open and receptive instead of someone who gave the impression he kept a loaded gun in his desk drawer."

The Greens’ first female Chancellor candidate, Annalena Baerbock, remarked that teh US was "so deeply divided."

She sounded more sober as she praised the new administration for "trying to bridge some of the gaps by investing in infrastructure and taking on the huge challenge of becoming carbon neutral." Given the "low base," former President Trump, she said, "change is possible."

Petr Bystron of the opposition far-right AfD warned: "Biden is leading America towards catastrophe, both domestically and in terms of foreign policy." The lawmaker highlighted the confrontation with Russia  and negative influence on the Nordstream 2 pipeline project, were reasons for concern.