Opinion: Angela Merkel's 'we can do this' refugee mantra lives on

Two years ago, Chancellor Angela Merkel uttered her now famous refugee crisis mantra, "we can do this." She no longer uses that phrase, but it still speaks volumes about Germany, says DW's Christoph Strack. 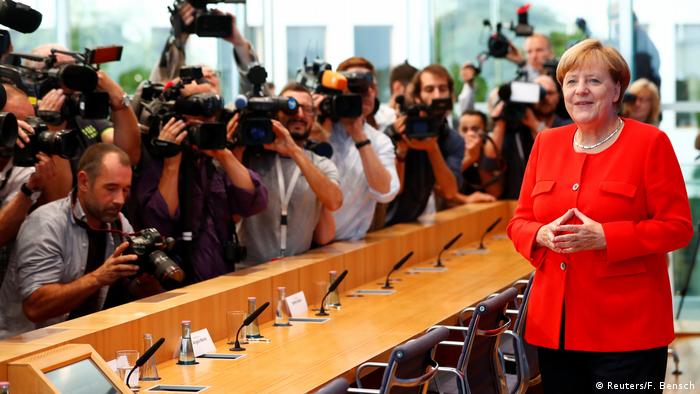 "A year like that cannot and should not ever happen again," Angela Merkel tells her supporters at campaign appearances around the country. She's talking about 2015, the year hundreds of thousands of refugees came to Germany at the peak of the migration crisis. Last week alone, she said it at stops in Bayreuth and Bad Kissingen, both in Bavaria, in Fulda in the state of Hesse, in the northern German city of Vechta, in Quedlinburg in the Harz mountains, and in Annaberg, Saxony. North, south, east and west - she is saying it to all of Germany.

Merkel is portraying herself as the tough-talking head of the Christian Democratic Union (CDU). And it comes across as though Merkel the conservative party leader is trying to bury the Chancellor Merkel who delivered the brave, some might even say bold, message on August 31, 2015: "Germany is a strong country. We have done so much - we can do this!" She inspired thousands of people with those words. They reminded us of what is both necessary and possible; they reminded us of our shared values.

Read more: How are refugees settling into Germany, two years on

"We can do this" quickly became a catchphrase, even though Merkel used the sentence sparingly, only in key speeches. When that happens, the words can also quickly lose their meaning. The context changes, and they're used ironically, or when delivering biting criticism. Around a year on, Merkel distanced herself from the phrase, saying that it had "practically become a cliché."

Merkel first made the emotional appeal two years ago at her traditional summer press conference. Two years on at the same event, there was no mention of it. Instead, Merkel talked in her typically pragmatic way about many aspects of the migration crisis, how to clamp down on the criminal business of human trafficking and options for controlled immigration.

One of the problems during those exceptional weeks of September 2015 was the expectation on the part of many that integration would happen quickly, within the space of a few years. Integration is hard work; it's a project for generations. And it requires changes on both sides - the new arrivals as well as the society they're arriving in.

Integration happens locally, in the towns and city districts where immigrants live. The era of the big reception camps full of refugees is over. And despite all the hurdles, there are already success stories of students showing us that the younger generation is finding it easier to gain a foothold here. In the labor market, experts remain convinced that, after initial high unemployment among refugees, a positive overall effect on the economy will be evident after three to 10 years. From the very start, experts showed their relief at the positive effect immigration would have on Germany's strained pension system.

On the other hand, parts of the population reverberate in fear with every terrorist incident, no matter the background of the perpetrator. Merkel's decision to open the gates, and her "we can do this" mantra, may not have divided Germany, but it did cause some fragmentation.

"We can do this" will remain a quote for the ages; evidence that, when need be, words can inspire emotion among the usually cool, reserved Germans. No one knows whether there will be a comparable situation in future. What would happen if hundreds of thousands of people in the Baltics suddenly felt the need to leave their homes? If there were a Fukushima-type incident somewhere in Europe? Anything seems possible given the current friction in the world. That makes "A year like that cannot and should not ever happen again" sound like wishful thinking. And "we can do this" like an important rallying cry to keep on the back burner.