Opinion: An epoch-making year of crisis

It's reminiscent of the Cold War. The shooting down of a fighter plane has become the headline issue of global politics. It's a sign of how tricky the current situation is, says DW editor-in-chief Alexander Kudascheff. 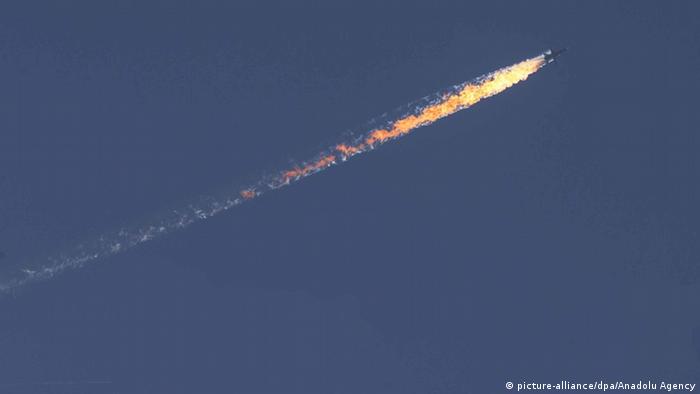 The realm of global politics is a powder keg. The fronts and the lines shift on an almost daily basis. There are more and more confrontations, not only between regional powers but between major ones too. The downing of a Russian bomber by Turkey - whether it happened over Syria or Turkish territory - is a sign of how tense nerves are, of how explosive the situation is.

Turkey has had an allergic reaction to Russia's airstrikes against the Syrian opposition and occasionally IS. It has reacted particularly sensitively because it thinks that Russia is deliberately targeting the Turkmen rebels fighting against Assad. This is like striking Turkey, for which the spiritual bonding of Turkic peoples remains a major goal. Like striking the Turkey that sees itself as a friend of all of Bashar al-Assad's opponents and that had long accepted the triumph of IS. For too long, as we now know - and not only since Paris but since the attacks in Turkey itself.

NATO had to react, but has done so by showing solidarity towards Ankara while at the same time trying to de-escalate the situation in its tone and behavior towards Moscow. Nobody wants - even with words - to pour more fuel on the fire when it comes to the complicated situation in and around Syria. Despite the incident, the West still harbors some hope that the Syrian civil and proxy war can be ended with the help of Russia. In military and political terms. Russia is needed to do this, but it means that Assad has to be on board and in Western capitals he is acceptable - at most - as a temporary solution because currently the main target is "IS" - especially after the attacks in Paris, but also in Beirut and Bamako. Islamist terrorism is spreading its tentacles in all directions - in the Middle East, as well as in Africa, Asia and in Europe.

It is currently the biggest military and political challenge faced by the world's politicians. However, these have different interests: French President Francois Holland wants to orchestrate a joint campaign against IS, but his partners are hesitant. The United States has been striking from the air but will not get tangled up in the political and ideological confusion on the ground. Although, of course, the Pentagon knows that ground troops are vital if "IS" is to be defeated, President Barack Obama is not about sending them in even in his wildest dreams. Apart from their respective interests in securing supremacy, the aims of the big regional powers - Saudi Arabia and Iran - do not coincide in the slightest.

What role can and must Germany play?

That's why Francois Hollande has also asked Europeans for help and support, prompting a hesitant reaction, even in rhetorical terms. Germany, France's closest ally, has to answer some unpleasant questions: How is it willing to support Paris and moreover how can it support Paris? Definitely not in Syria. Perhaps instead by providing relief where France is militarily engaged, such as in Mali. The German government wants to put forward this offer and the army could do it, but the German population is still skeptical. The Franco-German alliance is up against its toughest test.

Global politics has become disorganized. Power relations are unclear. Not only is there the threat of IS-led terrorism, but the ongoing, unsolved refugee crisis has Europe and many other parts of the world on tenterhooks. In practical terms, state institutions barely know how to deal with everyday problems and in terms of the future, because nobody knows how to integrate millions of people from different cultures and traditions. 2015 is an epoch-making year of crisis - and it's not even over yet.

Have something to say about this view? Add you comments below. The thread is open for 24 hours from posting.

Moscow reacts with fury after Turkey shoots down Russian jet

Vladimir Putin has accused Turkey of financing terrorism after a Russian jet was shot down. Turkey says the plane violated the country's airspace, but as Emma Burrows reports from Moscow, Russia disagrees. (25.11.2015)

Experts warn that a crisis of historic proportions is brewing between Moscow and Ankara after Turkey shot down a Russian plane that edged into its airspace on Tuesday. (25.11.2015)

Opinion: Europe should listen more to Africa on migration 22h ago