Last June, Hong Kong protesters took to the streets against a proposed extradition bill and started a yearlong protest movement. Now they are fighting against another law, but with different strategies. 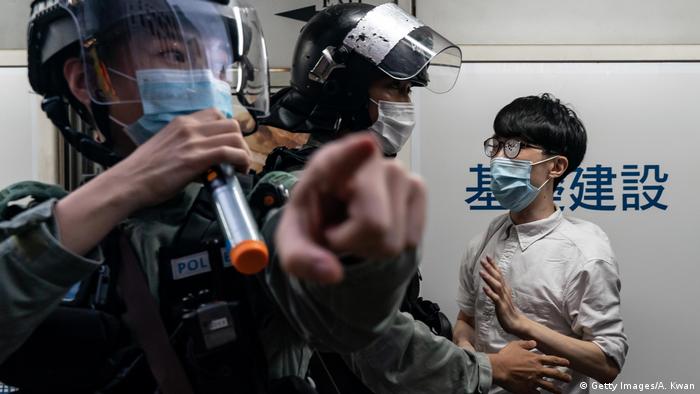 Dave Cheung, 25, used to be a frequent protest-goer. He identifies himself as a "radical" – a protester that is usually dressed in black, wears a gas mask, sets up roadblocks and confronts police on the front lines.

He was arrested when the protests started in June of last year, for being involved in clashes with police outside government headquarters, following a peaceful protest that same day. He was later released on bail, but the arrest didn't stop him from participating in more demonstrations.

The street protests began in response to a now-vetoed bill that would allow suspects to be extradited to China for trials. However, even after the bill was scrapped, protesters later raised other demands, including the resignation of Hong Kong Chief Executive Carrie Lam and universal suffrage.

The demonstrations were faced with heavy police crackdowns and mass arrests of protesters, particularly of the "radicals."

However, Cheung believes that taking to the streets is no longer an effective way to continue their fight.

"There's no use in confronting the police now. It's obvious that they are so much more equipped than we are, and that they won't bear the consequences for the things they did," Cheung told DW.

"We need to change our approach. It's obvious that the government doesn't care about how many people or how often we protest on the streets."

Police were accused of excessive use of force and conducting arbitrary arrests, which led to one of the five demands that protesters touted – an independent investigation into the police department's use of force. Instead, however, the government commissioned a police watchdog to conduct an examination, which lawmakers and international experts said was not truly independent and had no investigative power. The resulting report claimed that police "acted within the guidelines."

Cheung, who himself is facing a trial this month on a charge of illegal assembly, said that taking to the streets will now only lead to unnecessary harm. If convicted, he will face a maximum of five years in jail.

With Beijing's plan to impose a new national security law, which would ban treason, secession, sedition and subversion against the Chinese government, many fear that any criticism of either the Hong Kong government or the Communist Party will lead to prosecution.

"We need international attention. We need help from other countries," said Cheung. "We don't have enough power to fight alone."

The US, UK, Canada and Australia's condemnation of the security law offered protesters a small victory.

In response to Beijing's decision to impose the law, the US revoked Hong Kong's special trade status, meaning that the city would no longer enjoy favorable tax policies and zero tariffs on imports and exports of goods with the US. US Secretary of State Mike Pompeo said that Hong Kong is no longer autonomous enough to merit such status.

"Hong Kong has now been recognized as standing on the front lines in the fight against authoritarian China," said Law.

"That's what we wanted to achieve. We [Demosisto] have been very active in international lobbying. Hong Kong people need to have their own voice. We need to be the ones telling our own stories, not China," Law told DW.

Until now, the US has treated Hong Kong as a separate entity from the rest of China in terms of trade, as per a deal that was made before Britain handed control of the city back to Beijing in 1997.

The new status could cause huge damage to Hong Kong's economy, but activists see it as a step towards achieving a greater goal; showing China that there are consequences for its actions.

"China has never been held accountable for what it has done in terms of human rights abuses or its violation of Hong Kong's high autonomy," Law said.

"Many countries have expressed that they will impose sanctions if Beijing goes ahead with implementing the law. What we can do now is seize this chance to continue the fight with the changing international dynamics," Law said, adding that Hong Kong itself is a strategically important place, both politically and economically.

While politicians and activists like Law are lobbying and campaigning to attract more international support, others are working on pressuring the local government.

"Because of police brutality, the COVID-19 social gathering ban and the national security law, many people are afraid to speak out. That's why we want to provide a safe channel for our members to express their opinions," said Vic Tse, a representative of a new coalition of labor unions.

The coalition, which comprises 24 unions across 20 different industries, recently called for a referendum on whether to go on strike against the proposed national security law.

"We hope that even when social gathering ban is in place, there are other ways to keep protesting and to keep telling the government that we don't want this law," said Tse, who is also the chairperson of Hong Kong Public Relations and Communications Union that was formed in December 2019, during the protests.

According to Hong Kong's Labor Department, 1,578 applications for union registration were submitted over the first three months of 2020, compared with 142 across all of 2019 and 13 in 2018. As police are increasingly rejecting applications to hold rallies, those who protest anyway are now at greater risk of being arrested for "illegal assembly." Large-scale, organized union actions such as general strikes thus provide an alternative to the traditional protest movement.

Tse's coalition hopes that the referendum will gather over 60,000 votes. If over 60% of the votes support the motion, they will go ahead with a three-phase general strike, with the first phase lasting for three days in order to first warn Beijing against the consequences of implementing the law in Hong Kong.

A general strike in August last year against the now-withdrawn extradition bill sent the city into chaos, leading to the cancellation of more than 200 flights, as well as the disruption of train and bus services. But subsequent strikes haven't created as much momentum, and in many cases, Tse said, have led to serious repercussions for the few people who participated in them. A referendum, she said, would ensure that enough people take part in order to minimize overall risk for participants.

"The paradox of strikes is that the more people participate, the less dangerous it is because the chance of repercussions is lower. They can't just fire everyone," said Tse.

Cheung, while awaiting trial and facing an uncertain future, said he is in favor of a general strike and will participate without a doubt. "We have come so far, and at this point, there's not much to fear. If we don't speak out now, we might never be able to speak out again. And we all know that if we succumb to the repression this time, only more repression will come."