Police arrested 53 demonstrators for defying a ban on gatherings of more than eight people. Chief Executive Carrie Lam urged peace in the city, calling for a 'stable and peaceful environment.' 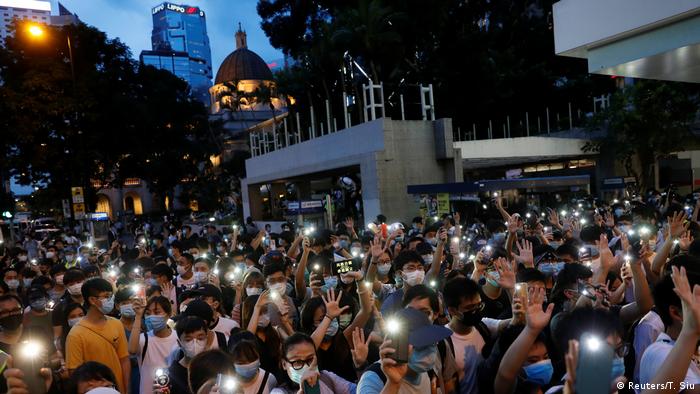 Thousands of people gathered in Hong Kong on Tuesday evening to mark the one-year anniversary since the start of anti-government protests, as the leader of the semi-autonomous city called for peace and stability.

"Everyone has to learn their lesson, including the Hong Kong government," said Hong Kong Chief Executive Carrie Lam. "Hong Kong cannot bear that kind of chaos, and the people of Hong Kong want a stable and peaceful environment to be able to live and work here happily."

Police said on Wednesday that 36 males and 17 females were arrested for offences including unlawful assembly. Protesters were defying a ban on gatherings of more than eight people, in place to curb the spread of coronavirus.

Protesters shouted slogans such as "Hong Kong independence, the only way out," and "Fight to the end," and marched despite police warnings that force could be used to disperse participants and jail them of up to five years.

Demonstrators also gathered in shopping malls at lunchtime, holding up signs saying "Liberate Hong Kong" and singing protest songs. Earlier in the day, police closed some roads and walkways ahead of possible protests.

Months of massive and often violent protests started on June 9 last year, when as many as one million people took to the streets to voice their concern over a later-vetoed bill that would have allowed extraditions to mainland China.

"The mass protest on June 9 last year has been etched into the collective memory of Hongkongers," the Civil Human Rights Front, which organized the event, wrote in a Facebook post on Tuesday. "It also marks the beginning of our togetherness in defending our beloved city."

A new cause for protest

Now, protesters have started gathering to oppose the implementation of a security law — imposed by Beijing — that would ban subversion, secession, terrorism and foreign interference. Critics say that the law could be used to crackdown on dissent and criticism of Beijing. They say it would also threaten the "one country, two systems" framework following the handover of Hong Kong from Britain to China in 1997.

More demonstrations against the security are planned in the coming days.

However, while specific details of the law or how it will operate have not yet been revealed, authorities in Beijing and Hong Kong have said there is no cause for concern and the legislation will target a minority of "troublemakers."

Zhang Xiaoming, deputy director of the Chinese, Cabinet's Hong Kong and Macao Affairs Office, blamed the protests on foreign intervention, in a speech posted on the office's website on Monday.

"The more the bottom line of national security is consolidated, the greater the space will be for Hong Kong to leverage its advantages under; one country, two systems," Zhang said. China will "unswervingly" protect its sovereignty and block any outside interference in Hong Kong's affairs, he added.

Over the past year, around 9,000 people have been arrested and more than 500 people have been charged with rioting. The protest movement saw a lull at the start of the coronavirus pandemic, but demonstrations recently resumed since the security law was announced.

On June 4, tens of thousands again defied the law on gatherings to mark the anniversary of the 1989 Tiananmen Square crackdown, when the government declare martial law in Beijing and use assault rifles and tanks to fire at demonstrators.

Despite a ban on the annual vigil to mark the Tiananmen Square Massacre, thousands have marked the event in Hong Kong and Taiwan. Protesters used the commemoration to show their ongoing resistance to Beijing. (04.06.2020)