Despite a ban on the annual vigil to mark the Tiananmen Square Massacre, thousands have marked the event in Hong Kong and Taiwan. Protesters used the commemoration to show their ongoing resistance to Beijing.

The ban on the annual vigil to mark the Tiananmen Square Massacre, the first in 30 years, didn't stop thousands of Hong Kongers from attending Thursday's mass commemoration ceremony in Victoria Park. The occasion normally attracts tens of thousands of people every year — but police banned the annual tradition this year, citing the increased risk of coronavirus infection.

Citizens removed police barricades in order to make their way to the mass vigil, with people at the scene telling media they did not think police could arrest everyone. Candlelight vigils also took place in other parts of Hong Kong, with thousands gathering to pay tribute to the victims of the Tiananmen Square Massacre in 1989.

Earlier in the week, in reaction to the ban, organizers had called on people to hold their own vigils in different parts of the city. Lee Cheuk-yan, one of the event organizers and the chairman of the Hong Kong Alliance in Support of Patriotic and Democratic Movements of China, told DW he hopes this year's vigil will reflect Hong Kongers' defiance of the Chinese government.

Read more:Opinion: Tiananmen has always served as a moral to learn from 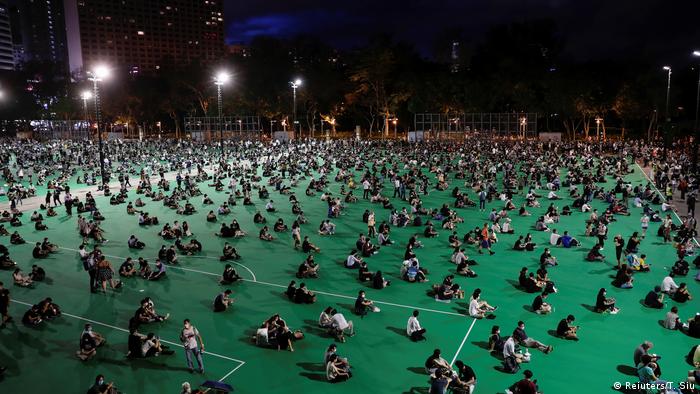 "We want the candlelight to spread across Hong Kong and use it to show the world that Hong Kong people are still continuing the tradition of remembering June 4," Lee told DW. "The world should know that we are facing the most powerful authoritarian regime in the world, but we still stand firm and be defiant."

For Lee, the call for solidarity is not confined to Hong Kong. "We are collaborating with other organizations all over the world to push for the hashtag, #6431, as the unifying hashtag that everyone can use to post pictures and share articles or writings about June 4, 2020," he said.

"We hope people all over the world who share our values can stand with us. We want more concerted action on the part of the international community to stand with Hong Kong," he said. 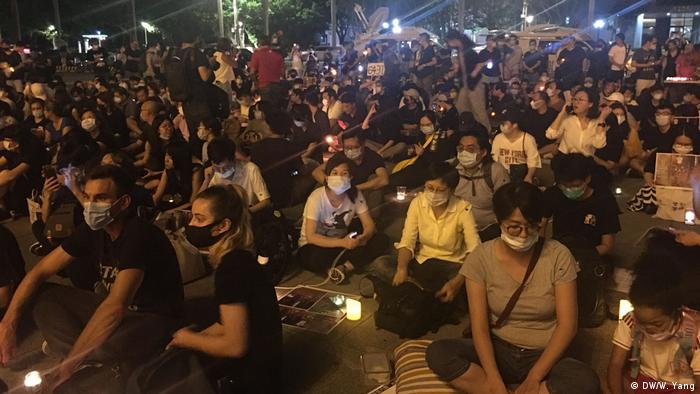 As Hong Kongers were gathering for their vigils, more than 3,000 people attended a similar event at the iconic Liberty Square in Taipei, Taiwan. When the clock hit 8:09 p.m., everyone held up candles and paid a silent tribute to the victims of the massacre for 64 seconds, echoing the date of the tragic event.

Edith Chung, a former Hong Kong resident who owns a restaurant in southern Taiwan, had been planning the Tiananmen vigil for the last few weeks. "Gathering in Taipei with my friends from Hong Kong on June 4 is just like attending the Tiananmen vigil in Hong Kong," Chung told DW, adding that it was important to extend the tradition and remember the democratic spirit that was crushed in 1989.

"The candlelight vigil was never about how many people attended the ceremony. Rather, it's about lighting up candles and singing together with other Hong Kong people in public places."

Amy, who moved to Taiwan in 2015 after Beijing began to tighten its control over Hong Kong, was grateful for the opportunity to attend the Tiananmen vigil in Taiwan, where it is both legal and encouraged by the island democracy. "The situation in Hong Kong will only deteriorate, because Beijing is trying to extend its authoritarian rule to Hong Kong," she said.

"Our advice to Hong Kong's younger generation is that if they have young children in the family, they should try to emigrate to other places," said George, a man in his 50s. "One thing that they should definitely not do is to trust the Chinese government's promise, because they are all about making empty promises that will never be properly fulfilled."

'A moment of awakening'

Chung described the Tiananmen Square Massacre as a "moment of awakening" for her and many Hong Kongers. "Even though many of us don't view ourselves as Chinese people, we were still inspired by the Chinese students' courage and determination," she said. "We witnessed how the Chinese government harmed its people with such violence, and the scenes from Beijing saddened many of us."

Chung decided to move to Taiwan after Beijing tightened its control following the mass protests in 2014 known as the Umbrella Revolution. Less than a year after she left Hong Kong in October 2018, the city descended into chaos as residents launched a monthslong protest against a controversial extradition bill. At least 8,000 people have been arrested in clashes with police since June 2019, and more than 1,500 have been prosecuted for participating in the protest.

Since the start of the coronavirus pandemic, the Hong Kong government has imposed strict rules restricting public gatherings across the city, banning all forms of large-scale public events. However, after Beijing revealed its plan to enact a controversial national security law for Hong Kong late last month, the city descended into another round of violent clashes between protesters and police. Hundreds of people were arrested within a few days.

"The most important things to Hong Kong is the freedom and rule of law that we enjoy, but now the Chinese government is trying to dismantle our whole system with this controversial law," said Melody, who attended the Taipei vigil with a group of Hong Kong friends.

"They have completely breached the promise of 'one country, two systems' and turned the governing principles to 'one country, one system.' They impose the law onto Hong Kong by circumventing all the governing institutions in the city. This is an illegal act and they have taken away all the remaining freedom that we are entitled to as Hong Kong residents." 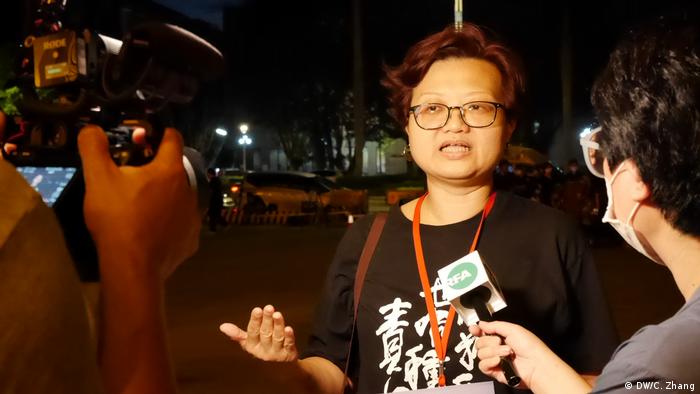 Jung Hui-Chin, a Hong Konger living in Taiwan, hosts an event in Taipei to remember the 1989 Tiananmen Square massacre

After learning about the ban on the Tiananmen vigil, Chung realized she had the responsibility to continue the tradition, even from abroad. "I hope to remind Hong Kong people, especially the younger generation, that we choose to commemorate the Tiananmen Square Massacre because we need to support family members of the June 4 victims as well as those who have been fighting for democracy and freedom in China over the last three decades," she said.

"We can't forget that Hong Kong is still part of China, so if they don't change, it will be very hard for Hong Kong people to demand any real change as well."

In Taipei, the crowd began chanting popular slogans from last year's anti-government protests. As organizers played the theme song from Hong Kong's annual Tiananmen vigil, they stood in solidarity with their peers in Hong Kong, with the hope that more people around the world would join them in defending Hong Kong's way of life.