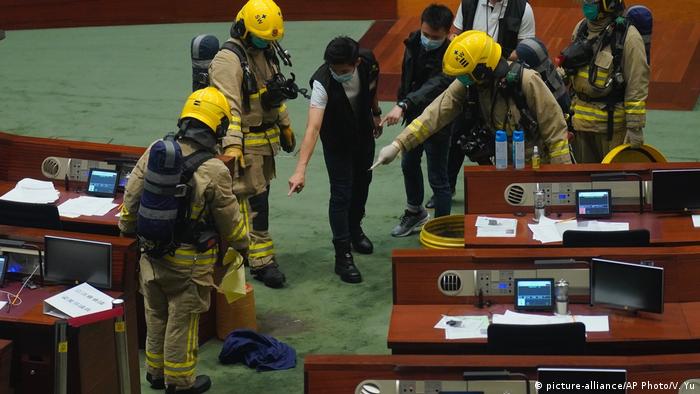 Hong Kong's parliament on Thursday voted to pass a controversial bill that makes it a crime to disrespect the Chinese national anthem.

The legislature’s pro-Beijing majority said the move was necessary for Hong Kong citizens to show appropriate respect for the anthem, called "March of the Volunteers."

The law was approved following a debate of the bill, which was disrupted when two pro-democracy lawmakers spilled a foul-smelling liquid in the chamber in protest of China's crackdown on a protest in Tiananmen Square, which took place 31 years ago on June 4.

During the debate, lawmakers Eddie Chu and Ray Chan rushed to the front of the chamber and splashed out a pungent fluid as guards attempted to control them.

The disruption took place after pro-establishment lawmakers vetoed most amendments to the bill proposed by democrats.

Read more: The end of freedom of expression in Hong Kong

The law regulates when the Chinese national anthem is to be played in Hong Kong and how people should behave in reaction to it.

Violators face up to three years in jail and/or fines of up to HK$50,000 ($6,450, €5,913). It requires "all individuals and organisations" to respect the national a them and to play and sing it on "appropriate occasions."

"A murderous state stinks forever. What we did today is to remind the world that we should never forgive the Chinese Communist Party for killing its own people 31 years ago," Chu said after the disruption. He and Chan were later removed from the chamber.

Tensions in the semi-autonomous city have been high since last week, when Beijing approved moving ahead with national security laws that would penalize secession, subversion, and foreign interference in Hong Kong.

Several foreign powers and human rights groups condemned the move. But China and the Beijing-backed Hong Kong government have said the bill does not pose a threat to the city's autonomy.

Thursday's vote took place as people around Hong Kong prepared to honor the memory of the the bloody 1989 crackdown on a student-led demonstration in Hong Kong's Tiananmen Square by the Chinese military.

In place of an annual gathering that in the past has attracted tens of thousands of people, observers across the city will light candles at home.

Due to the coronavirus outbreak, public gatherings in Hong Kong have been limited to no more than eight people.