Home to about 5,000 asylum-seekers, nearly one-third of the Jungle will be leveled in the following days to create a 100-meter 'buffer zone' between the camp and an adjacent highway, denying inhabitants direct access to vehicles bound for England.

With so many people living among garbage piles and frozen mud, a chaotic, possibly violent scene was averted on Monday after hundreds of European volunteers swarmed the camp to help inhabitants move their dwellings, effectively relocating 1,500 residents and 250 homes while building new shelters from scratch.

Ben Harrison, a 20-year-old London native who helps allocate housing in the Jungle, described the undertaking as a "monumental effort."

"People heard about the eviction and came from Britain with trucks and trailers to move houses," said Harrison, who has been volunteering in the Jungle nearly four months.

"Without the volunteer help, the police would've had to tear-gas people out of their homes," he continued. "It didn't feel good to move them like this, but we avoided any possible violence by doing it."

'It's cruel to evict people in the middle of winter' 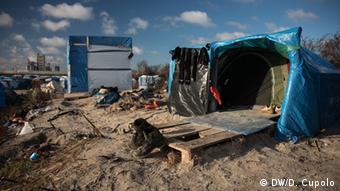 Harrison spoke in the Kabul Café, one of many establishments that make the Jungle feel more like a small city than a refugee camp. His yellow jacket caked with mud, and his eyes pensive over a cup of milk tea, Harrison said it was "cruel to evict people in the middle of winter," but, at least, the bulldozing was announced ahead of time.

"The last eviction happened in September underneath the highway bridge," he said. "Bulldozers came unannounced in the night, and people didn't have time to grab their documents, their asylum applications or the few personal items they still had … Sometimes the government tolerates the camp, and other times it doesn't."

The demolition comes as a new government-funded camp opens adjacent to the Jungle. The 18 millon euro facility is an arrangement of white shipping containers stacked atop one another, surrounded by fences with on-site security personnel, and has the capacity to house 1,500 people. 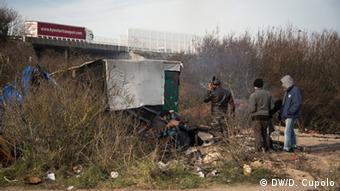 Afghan refugees stand around a fire in the area of Calais slated for demolition this week.

As of Monday, 300 people had moved into the new camp, and about 50 new residents were being allocated to the containers each day, according to Barbara Jurkiewicz, public relations representative for La Vie Active, the organization operating the facility.

In order to live in the containers, asylum-seekers must give a 3D scan of their palm print, which many Jungle residents are reluctant to do out of fear that any form of identification given to the French government will reduce their chances of leaving the country.

"We are not here to stay in France; we want to go to the UK," said Abdul Mumam, a Sudanese refugee who has been in Calais since October. "I prefer to stay [in the house I have now], because the police will take my fingerprints and they will make me take asylum in France."

Despite freezing temperatures and clothes-piercing winds from the Baltic Sea, many asylum-seekers share Mumam's views, expressing a profound distrust for French police and government, choosing instead to remain in dilapidated structures not fit for winter conditions in Europe.

"We welcome people to move into the containers, but cannot force them to do anything," Jurkiewicz said. 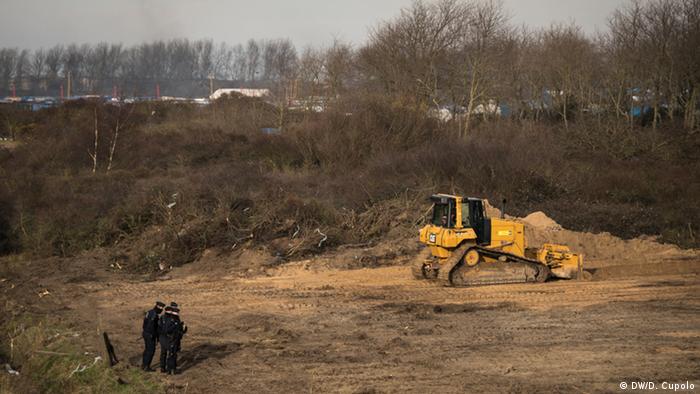 A bulldozer levels land near the Afghan section of the Jungle, visible in the background

Refugee camp in Calais existed for more than 15 years

The Jungle has existed, in one form or another, near the entrance of the Eurotunnel between France and England for more than 15 years. Though increased immigration from the Greek islands has brought more asylum-seekers to Calais than ever before, the squalid conditions in the camp are nothing new.

Frustrated by years of inaction, on-site volunteers are quick to blame the United Nations and European politicians for failing to recognize the Jungle as an official refugee camp, a status which would allow inhabitants to receive UNHCR assistance.

But when these claims are posed to Celine Schmitt, a UNHCR representative who monitors the situation in the Jungle, she asks whether establishing another refugee camp in France is really the solution.

"It's important to put people in a safe, warm place," Schmitt said, noting that France has various accommodation centers for those considering asylum. "The conditions are difficult here, and it is very difficult for people to think about their futures and make good decisions."

Several babies born in the camp 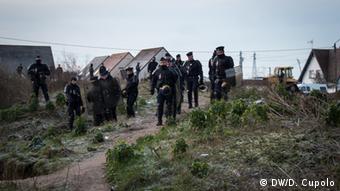 Schmitt said a UNHCR protection officer will be assigned to the Jungle in the coming weeks to inform inhabitants about the asylum process and refugee rights. The UN's also encouraging asylum-seekers to board bi-weekly buses that take them to government accommodation centers, where they can receive shelter, food and learn about their asylum prospects in France.

Since the fall, approximately 2,000 people have gone to these centers, and many have made claims to stay in France, Schmitt said.

Back at the Kabul Café, Ben Harrison makes one call after another as the bulldozers level terrain near the Afghan area. He's relieved nearly everyone was moved out of the demolition area before any construction equipment arrived, but remains anxious to find a solution for the Jungle.

"It's hard to blame someone for doing what the international system allows," Harrison said. "And now we have this situation where accountants and doctors are living in tents and shacks in freezing temperatures, among vile diseases, and to top it off, we've had several babies born in this camp."

"This is morally wrong and there is no clearer thought in my mind."

Briton cleared for attempt to smuggle Afghan girl to England

An Englishman was cleared in France for trying to 'aid illegal immigration' by bringing 4-year-old refugee to Britain. Meanwhile, French authorities were attempting to clear the squalid 'jungle' migrant camp. (14.01.2016)

The United Kingdom has granted asylum to Sudanese refugee Abdul Haroun. The man made headlines in August after walking 50 kilometers through the Channel Tunnel from France in a desperate bid to reach Britain. (04.01.2016)

A court in Lille has heard a lawsuit brought against the French government by aid organizations and decided in favor of the NGOs. Authorities have been ordered to improve conditions in the refugee camp at Calais. (03.11.2015)