French authorities have begun using bulldozers to demolish parts of a refugee camp in Calais to create a buffer zone. Some 1,500 of the camp's residents have been or will be forced to move. 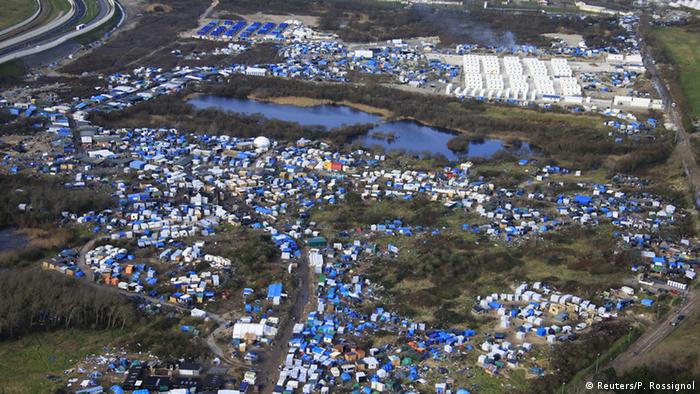 The bulldozers on Monday took the first steps toward clearing a 100-meter-wide (100-yard-wide) strip next to a highway that runs next to the so-called "Jungle" refugee camp in Calais, which houses some 4,500 people waiting for an opportunity to get to Britain.

DW correspondent Diego Cupolo was at the scene.

The operation had originally been scheduled for last week but was postponed, possibly owing to efforts by volunteers and refugees to move makeshift homes from the area before the bulldozers came.

The buffer zone is intended as a security measure for the highway, which leads to the Eurotunnel, where asylum-seekers often try to enter trucks bound for England. Most of them are caught by police and sent back.

With winter setting in, the French government has been constructing a more permanent camp next to Calais, but efforts to persuade "Jungle" inhabitants to move there have been met with resistance.

Many of the refugees are reluctant to leave a place where they have built up an established community, while others fear that the hand prints required by French authorities from people who move to the new camp might affect their chances of moving on within Europe.

Officials insist the hand-scanning system is solely a measure to increase security.

Migrants wanting to get to Britain have been gathering in Calais for some years now, but their numbers have grown rapidly amid the huge surge in people fleeing to Europefrom conflict and poverty in the Middle East and Africa in the past year.

The number of people in the "Jungle" camp reached a peak of 6,000 over the summer.

However, the population has dwindled somewhat since then, as many have managed to cross the Channel by ferry after paying mafia groups to help them stow away in trucks.

Coronavirus digest: US braces for Thanksgiving surge 43m ago