OECD: German schools falling behind in digitalization | Germany | News and in-depth reporting from Berlin and beyond | DW | 15.04.2021

Around the world, students are suffering from a year of pandemic restrictions, exacerbated by the lack of a comprehensive strategy to lift schools into the digital age . Germany is no exception. 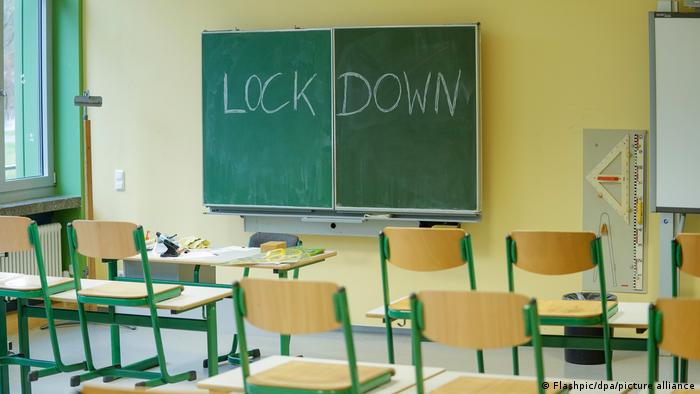 German schools have been in and out of lockdown for months

When Germany's education minister stood before parliament on Wednesday, the dire situation students in the country face due to the pandemic was not immediately obvious. Instead, Anja Karliczek touted the country's role in developing the first COVID-19 vaccine. Hydrogen fuel and artificial intelligence also graced the conservative politician's talking points.

Then came the bad news: German schools are in big trouble. They are less digitally connected than universities and suffer from the yo-yo of repeated closures and re-openings that shuttle children between in-person and remote learning.

"We are currently working with the states on a joint program to help students catch up from pandemic-related shortfalls in their education," Karliczek said.

Nearly one-quarter of German students will need that kind of extra help, she added. For now, the federal and state governments are focused on a "safe learning environment," which means a mix of hygiene measures, remote learning, and testing students and staff.

A year after the start of the pandemic, Karliczek said, students, parents and teachers are all exhausted and frustrated.

The picture is similar around the world. About 1.5 billion students in 188 countries have been affected by school closures, according to a report published by the Organization for Economic Cooperation and Development (OECD). In February, fewer than 40% of schools in 33 comparable countries were open again for most students. 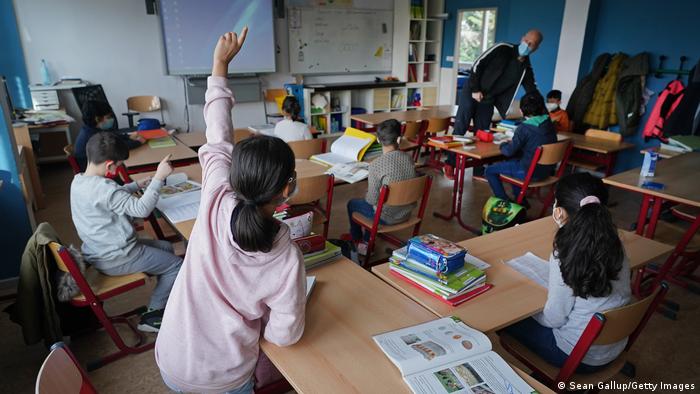 Kids do more than just learning from textbooks at school, experts say

'Not just for learning'

The impact is not just felt in academic progress, as school is a place to develop life skills and have contact with other young people. "It is more than just a place where students learn," said OECD Education Director Andreas Schleicher.

While it seems that young people are less at risk for serious medical complications from COVID-19, they are among the most affected group in other ways.

In 14 of the 33 comparable countries, primary schools were closed aat least once. Another 11 closed theirs multiple times. The picture in countries like Germany and Italy is even more fragmented, where the pandemic's impact on schools differs among states and regions.

Many secondary schools in Germany saw their doors close for 15 to 30 days. That is relatively mild, putting Germany in line with closures in its French, Dutch and Belgian neighbors. Italy, which is one of Europe's earliest and hardest-hit countries, saw school closures of up to 101 days.

Education experts agree the closures have an enormous adverse impact on young people.

"It is worth noting that the overall incidence rate does not seem dependent on how many days schools were closed," Schleicher said.

Concrete figures are hard to come by, but many public health officials suspect that students bring COVID-19 home to their families, without showing symptoms themselves.

It is little surprise that countries better digitally equipped before the pandemic have been better prepared to overcome its obstacles. In Germany, a sudden switch to online courses left "much to be desired," Schleicher said.

Other European countries including Spain and Portugal, Schleicher said, made use of mass media for their lessons during the pandemic. "The array of digital media was a decisive factor for success there," he said. "Perhaps this is something Germany can learn from."

COVID-19 Special: Education in the time of coronavirus

An association representing German families has called for an immediate end to blanket school closures, regardless of the incidence rate.

"For months, our children have been living in social isolation, unable to learn with and from other children. A one-off window of opportunity to grow and learn is closing," the association said on Wednesday. It called for a coordinated plan including hygienic measures that would to allow schools to remain open.

As Germany mulls a nationwide pandemic response, it is considering closing schools when the seven-day incidence rate exceeds 200 per 100,000 people. Many areas of Germany are already nearing that threshold.

COVID infections in children ― what do we know?

COVID-19 cases in children are rare and usually less severe than in adults. But it's not clear how new variants might change this, and whether there'll be a vaccine suitable for children anytime soon.

At least 1,600 people have died and more than seven million have been displaced in the flooding in Pakistan. Hundreds of thousands are living in the open or in makeshift camps. One aid organization in the city of Quetta has set up a temporary school.