US President Obama has explained what happened to a bust of Winston Churchill following criticism from euroskeptic London Mayor Boris Johnson. Obama also warned of strained trade ties in the event of a Brexit. 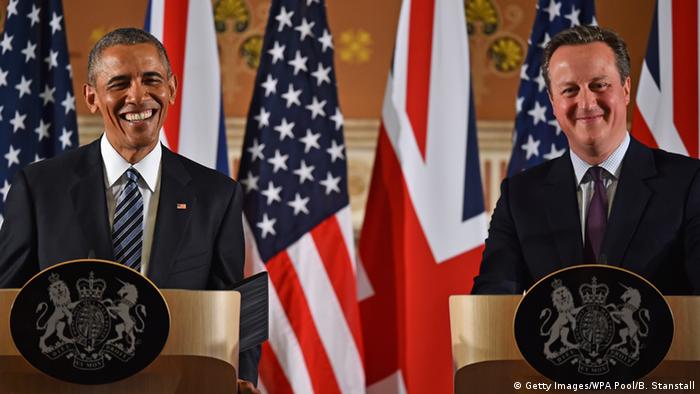 In response to Boris Johnson's claims that a bust of British wartime leader Winston Churchill had been removed from the White House due to anti-empire sentiment, Obama said on Friday that Churchill was, indeed, still there - just not in the Oval Office.

The bust was relocated to Obama's private office on the second floor of the White House where he says he sees it every day "including on the weekends when I'm going into that office to watch a basketball game."

His predecessor George W. Bush had another bust of Churchill in the Oval Office, but Obama said he decided to replace it with one of civil rights leader Martin Luther King Jr.

"As the first African-American president, [I thought] it might be appropriate to have a bust of Dr. Martin Luther King in my office," Obama said during a joint press conference with British Prime Minister David Cameron.

"There's only so many tables where you can put busts, otherwise it starts looking a little cluttered," the president told a chuckling audience.

"I love Winston Churchill. I love the guy," he added.

Johnson had mooted in a column for daily tabloid The Sun that Obama's "part-Kenyan" heritage might explain an "ancestral dislike of the British empire" on the president's part.

During the press conference, Obama defended his earlier appeal to UK citizens to vote to stay in the European Union ahead of a June 23 referendum.

"I'm offering my opinion. In democracies, everyone should want more information, not less," Obama said after euroskeptic critics like Johnson accused him of interfering in the debate. "If one of our best friends is in an organization that enhances their power, enhances their economy ... I want them to stay in it," he told reporters.

Obama likewise hinted that a vote to leave the EU would put Britain "at the back of the queue" for a new trade deal with the US.

"It's fair to say that maybe some point down the line there might be a UK-US trade agreement but that's not going to happen any time soon because our focus is in negotiating with a big bloc, the European Union, to get a trade agreement done," Obama said, referring to the longstanding work on the TTIP accord between the EU and US, also involving the UK.

The UK's Cameron backed up these sentiments by saying that Britain's "special relationship" with the US was strengthened by the country's membership in the EU.

"I think it's right to listen to, and consider, the views of your friends," Cameron said.

Following his trip to Great Britain, Obama is set to travel to Hanover, Germany for the country's largest annual trade fair.