A US National Rifle Association advert has sparked reaction as spokeswoman Dana Loesch urged members to "fight this violence of lies." The video condemns Obama, the media and Hollywood for inciting anti-Trump protests. 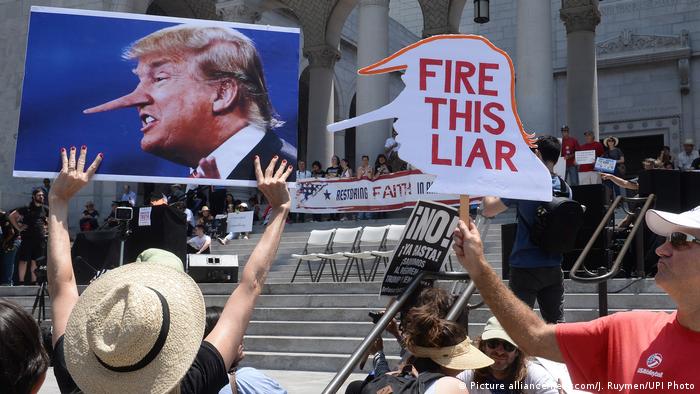 A National Rifle Association (NRA) advertisement featuring the group's spokeswoman and popular gun-rights pundit, Dana Loesch, called on the supporters to strike back against anti-Donald Trump protests "with the clenched fist of truth."

"All to make them march, make them protest, make them scream racism and sexism and xenophobia and homophobia," Loesch says in the video, as images of recent anti-Trump protests play in the background.

"To smash windows, burn cars, shut down interstates and airports, bully and terrorize the law-abiding until the only option left is for the police to do their jobs and stop the madness," she adds.

"And when that happens, they'll use it as an excuse for their outrage," she continues. "The only way we stop this, the only we save our country and our freedom, is to fight this violence of lies with the clenched fist of truth."

The ad, which is part of the NRA's "Freedom's Safest Place" campaign, was originally posted to YouTube in April, but it began to attract comments from Trump's critics after it appeared on the NRA's Facebook page in June.

DeRay Mckesson, a leader of the Black Lives Matter movement, called the NRA ad "an open call to violence to protect white supremacy."

Montel Williams, who urges background checks on gun owners, said it was "disgusting."

Jon Favreau, a former speechwriter for Obama, called the video "revolting and frightening."

Many other social media users also slammed Loesch and the NRA for the ad.

Read: For many anti-Trump activists, the Democratic Party is 'part of the problem'

In an interview on Thursday, Loesch defended the advertisement and said she actually spoke out against violence.

"I hardly think that condemning violence is inciting violence," she said. "I think the ad is very clear - there are excerpts from actual riots that are included in the ad and that's exactly what I'm addressing."

"I don't understand why it's so bad to condemn violence," she said.

Most of the anti-Trump demonstrations, like the Women's March attended by hundreds of thousands of people in April, have been peaceful. Some protests during Donald Trump's inauguration in January turned violent with anarchists damaging public property and setting vehicles on fire.

Trump's travel ban is back in effect across the US