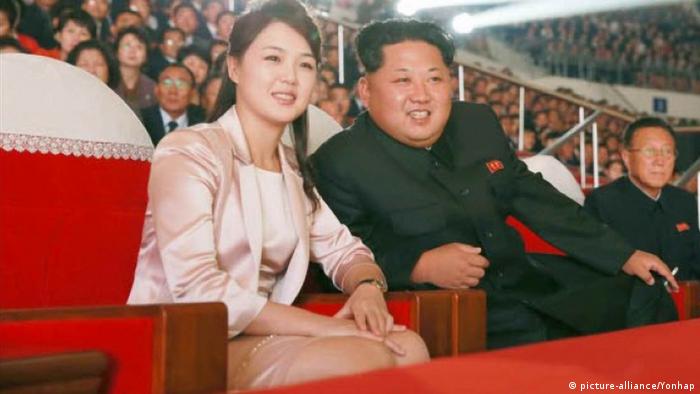 In the early years of Kim's rule, Ri Sol-ju was frequently spotted alongside him at domestic events

Ri Sol-ju was last seen in public on January 25, 2020, when she accompanied her husband to the Samjiyon Theater for a performance to mark the Lunar New Year. In pictures released by state media, she is seen applauding between the North Korean leader and his aunt, Kim Kyong-hui, and surrounded by loyal members of the Workers' Party.

Analysts see Ri as a symbol of change within the North's leadership – a fresh feminine face who could soften the communist regime's image at home and abroad. In the early years of her marriage, she seemed to be having the desired effect.

There isn't much information about Kim's wife. It is believed that she was born sometime between 1985 and 1989, and that she studied at a university abroad – a rare honor for North Koreans.

Ri and Kim were reportedly married hastily in 2009, after Kim Jong Un's father, Kim Jong Il, suffered a stroke and the family sought to extend its bloodline. Kim Jong-il died in December 2011, by which time Ri had already given birth to a son. Reports suggest that she has since had two more children, although this has never been verified.

North's version of a 'first lady'

In the early years of Kim's rule, his wife was frequently spotted alongside him at domestic events. In July 2012 state media confirmed that she was his wife. According to reports in the South Korean media, her stylish dress sense, hairstyles and handbags were copied by Pyongyang's high society and coveted by ordinary people who had no hope of ever being able to afford such luxuries.

When Ri accompanied her husband on a state visit to China in March 2018, it was taken as further evidence that she was being groomed as the North's version of a "first lady". She attended the April 2018 inter-Korean summit, where she met her South Korean counterpart, and the following year, Ri helped host the state visit by Chinese President Xi Jinping and his wife.

Since then she's faded from sight.

Toshimitsu Shigemura, a professor at Tokyo's Waseda University and the author of many books on the Kim dynasty, says there are numerous theories as to why Ri has not been seen for more than a year.

"I have heard one suggestion that she has had another baby, which would be her fourth, and that she is reluctant to appear in public at the moment because of the coronavirus pandemic, although the government there still insists that there have been zero cases of the illness in the North," he told DW.

"Another suggestion is that the relationship between Ri and Kim is bad and that they are not spending time together, or perhaps Kim has decided that his wife was attracting too much attention for her clothes and hairstyles," he added. "That is not the sort of thing that works for a dictator in a country that is so male-dominated as North Korea."

Daniel Pinkston, a professor of international relations at the Seoul campus of Troy University, agrees that it is "odd" that Ri has vanished so completely from the media coverage of her husband's exploits for such a long time.

"For a while she was everywhere with her husband, accompanying him on 'field guidance' trips to farms and factories, but now, nothing," he told DW.

"From what we hear of the situation in the North, she emerged as this stylish, iconic woman alongside the leader. Some Korea-watchers interpreted this as symbol of a reformist, modernizing push within the regime there, although it is now clear that has not panned out," he added.

Instead, if anything, the North has in recent years reversed course in many areas and there are growing indications that Kim is once more relying on the military and is giving his generals greater control over the day-to-day running of the country, including a greater say in the national economy.

Speculation as to Ri's position in the hierarchy and the Kim family is likely to continue until she either reappears or state media makes an official announcement about her whereabouts.