North Korean leader Kim Jong Un has ended weeks of speculation over his health by appearing in public, according to state news agency KCNA. Kim reportedly attended the completion of a fertilizer plant near Pyongyang. 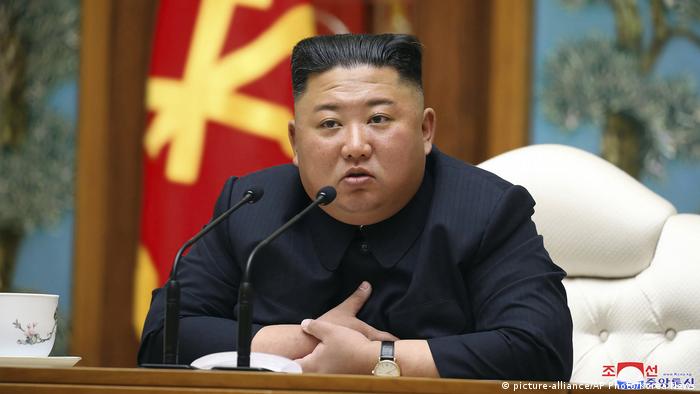 North Korea's state news agency KCNA said on Saturday Kim Jong Un had attended the completion of a fertilizer plant near Pyongyang, ending weeks of speculation over the health of the North Korean leader.

KCNA reported that Kim cut a ribbon at the event on Friday and those in attendance at the ceremony just north of the capital "burst into thunderous cheers of 'hurrah!' for the Supreme Leader who is commanding the all-people general march for accomplishing the great cause of prosperity."

Kim was accompanied by a number of officials, including his younger sister Kim Yo Jong, KCNA said.

Kim was last seen in public three weeks ago when he chaired a Workers' Party meeting, leading to speculation about his demise.

Adding further fuel to the rumors was Kim's non-appearance at the birthday celebrations of his grandfather and the country's founder, Kim Il Sung, on April 15, an event that marks the most important day in the North Korean political calendar.

Media reports citing sources in the intelligence and defector communities had suggested that the 37-year-old leader had undergone heart surgery and was in "critical condition."

However, this was played down by the South Korean government earlier this week. Moor Chung In, foreign affairs advisor to South Korean President Moon Jae-in, said that the North Korean leader was in good health.

The failure of the regime in Pyongyang to dismiss the reports as groundless rumor — as they typically tend to do when the rule of the supreme leader is in question — stoked uncertainty about Kim's health.

The first report that Kim was being treated for a heart complaint came on April 20, when the Seoul-based online media NK News reported that the North Korean leader had been admitted to the Hyangsan Medical Center, a state-of-the-art hospital set aside for members of the ruling Kim clan in North Pyongan province. Citing a source within the North, NK News — which is largely operated by defectors from the North — said Kim was convalescing at a nearby villa.

The reports indicated that Kim was responding well to the treatment but was still being monitored by medical staff.

The speculations about Kim's health also raised questions about his possible successor, with some analysts suggesting that Kim's sister, Kim Yo Jong, was most suited to succeed her brother should anything happen to him.