North Korea has launched two suspected short-range missiles off its east coast, the latest in a series of launches in recent weeks. It comes after Pyongyang sharply criticized US-South Korean annual military drills. 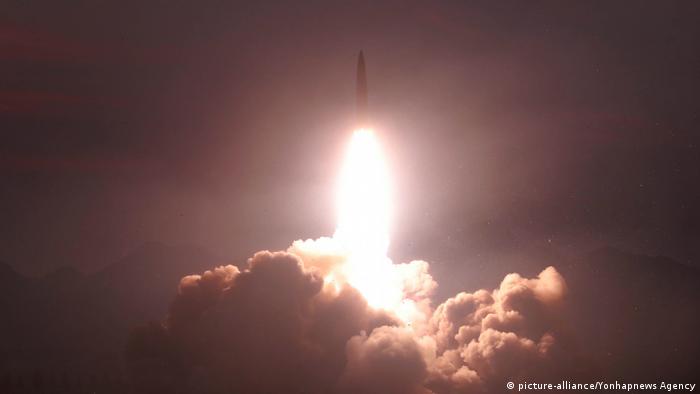 North Korea on Saturday fired what appear to be two short-range ballistic missiles into the sea off its east coast, the South Korean military said.

The projectiles were launched from northeastern South Hamgyong province, South Korea's Joint Chiefs of Staff said. They flew about 380 kilometers (236 miles) at the maximum altitude of 97 kilometers (60 miles).

"The test-fire proved that all the tactical and technological specifications of the system correctly reached the preset indexes," the KNCA report said, before adding that Kim expressed "high appreciation" for the scientists who had designed and built it.

Kim also said the weapons tests were necessary "for resolutely frustrating the ever-mounting military threats and pressure offensive of the hostile forces."

In response to the test, the South Korean government called a National Security Council meeting.

Saturday's launch is the seventh such missile test by North Korea since US President Donald Trump and Kim Jong Un met at the inter-Korean border in June. The North had been expected to halt weapons tests because the 10-day US-South Korean drills, which Pyongyang views as an invasion rehearsal, ended earlier this week.

The North Korean weapons tested during the drills have been mostly short-range missiles and rockets. Some of the weapons revealed developments of a new rocket artillery system and two different short-range mobile ballistic missile systems that experts say would expand the North's ability to strike targets throughout South Korea.

The latest missile test comes after the North Korean foreign minister's assertion on Friday that his country will try to remain "America's biggest threat" if the US continues to confront it with sanctions. Foreign Minister Ri Yong Ho also called US Secretary of State Mike Pompeo a "poisonous plant of American diplomacy" and vowed to "shutter the absurd dream" that sanctions will force a change in Pyongyang.

Ri's blistering rhetoric and the missile launches may dim the prospect of an early resumption of nuclear negotiations between the US and North Korea.

US-led diplomacy to rid the North of nuclear weapons collapsed after President Trump rejected Kim Jong Un's demand for widespread sanctions relief in return for partial disarmament steps during their second summit in Vietnam in February.

Trump and Kim met again at the inter-Korean border in June and agreed to resume working-level negotiations. But since then the United States has so far been unsuccessful in attempts to get talks going.