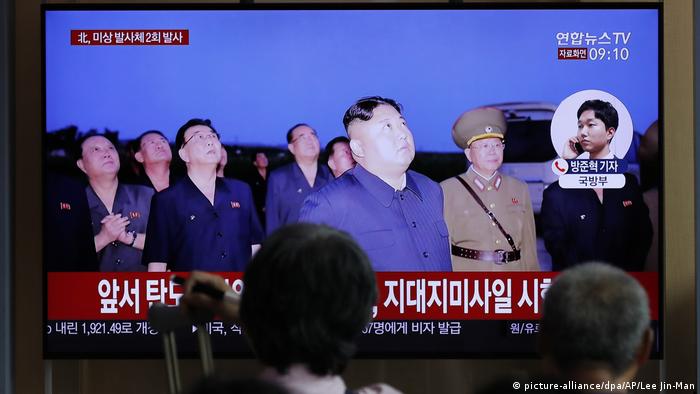 In a speech on Thursday, to mark the anniversary of Korea's liberation from Japan's 1910-45 rule, Moon had spoken of a goal of "achieving peace and unification by 2045," despite his single five-year-term presidency ending in 2022.

"His speech deserves the comments 'foolish commemorative speech,'" the North said in a statement carried by the official KCNA news agency.

"We have nothing to talk any more with the South Korean authorities nor have any idea to sit with them again," it added.

Seoul's Unification Ministry said the North's comments were not "consistent" with the spirit of inter-Korean agreements, including the Panmunjom Declaration signed by Moon and North Korean leader Kim Jong Un in April last year.

"We want to clearly point out that (the comments) won't help the improvement of inter-Korean relations at all," a ministry official added.

The comments from Pyongyang came as it launched at least two projectiles into the sea on Friday, South Korea's military said.

It was the sixth round of missiles in recent weeks in protest at ongoing joint military drills by Seoul and the US.

North Korea's statement said Moon was an "impudent guy rare to be found" for hoping that inter-Korean talks would continue while South Korea is conducting military drills with Washington.

Joint US-South Korean drills have been held for years but were downsized to ease tensions with Pyongyang.

Japan's Defense Ministry said the North Korean projectiles did not reach the country's territorial waters or its exclusive economic zone.

Working-level talks between North Korea and Washington appear to have stalled.

After a year of threats and rising tension, US President Donald Trump and Kim met at a historic summit in Singapore last year, where both leaders signed a vague pledge to work towards "denuclearization of the Korean Peninsula."

A second summit in Hanoi in February broke up amid disagreements over sanctions relief and concessions from the North.

The two leaders then agreed to resume nuclear talks during an impromptu June meeting in the Demilitarized Zone that divides the peninsula.

Pyongyang recently said nuclear talks will be held "strictly" between the North and the US, and has refused to hold a separate dialogue with the South.

US President Trump and North Korean leader Kim have met once again, this time in the Demilitarized Zone. In a largely symbolic meeting, Trump and Kim hailed their personal close relationship amid stalled nuclear talks. (30.06.2019)