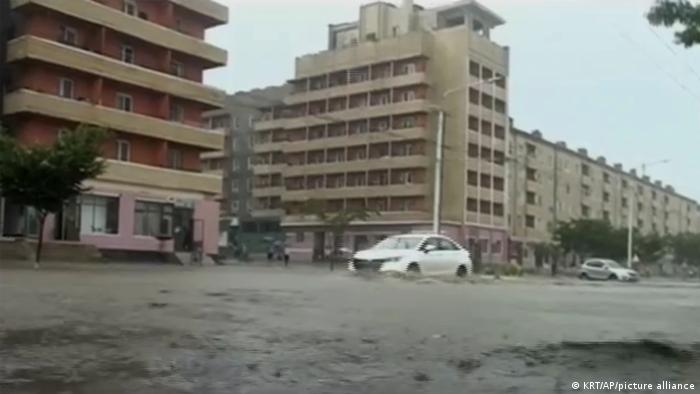 Kim Tok Hun, premier of North Korea's Cabinet, visited parts of South Hamgyong province and spoke to troops and other emergency responders who had mobilized to help repair flood damage.

Hun said he planned on "learning about the living conditions of the flood victims" and stressed the need for provincial officials to organize flood relief, KCNA news agency reported.

Footage from Pyongyang's state-run KCTV broadcast on Sunday showed homes flooded up to their roofs, as well as what appeared to be damaged bridges.

The report said that more than a thousand homes were damaged and about 5,000 people were evacuated. "Hundreds of hectares of farmland" were also reported submerged or lost in the province as river levees collapsed.

Kim said in June that North Korea's food supply situation was "getting tense" due to lingering damage from a typhoon.

The impact of natural disasters on North Korea is made worse by weak infrastructure and widespread poverty, while deforestation has left it vulnerable to flooding.

North suffered from a nationwide famine in the 1990s that killed hundreds of thousands of people.

As North Korea's premier toured South Hamgyong, as much as 300 millimeters (11.8 inches) of new rain fell in some areas of North Hamgyong province on Wednesday, state broadcaster KRT reported.

"Downpours have already hit these regions, so we need to prepare thorough countermeasures," a KRT presenter said.

The presenter called for "measures" for protects homes, other buildings and infrastructure "to prevent damage from landslides caused by floods."