Pyongyang is now struggling to handle thousands of suspected cases with limited medical capabilities. In response, the country has imposed a sweeping lockdown and called on the military to stabilize supply distribution. 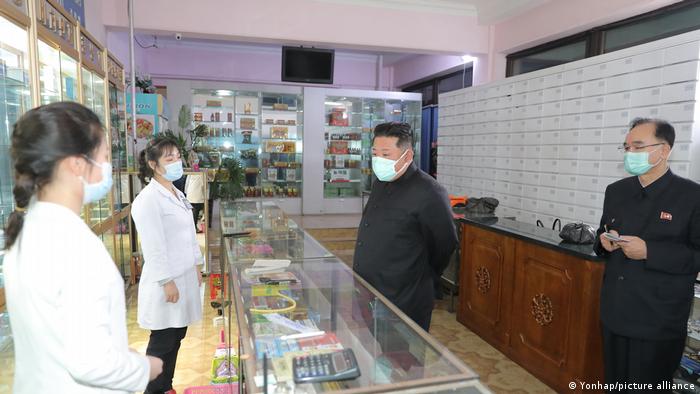 More than two years after the coronavirus pandemic began to spread across the world, North Korea confirmed on Thursday the first case of the illness within its borders. By Friday morning, the government in Pyongyang had admitted six deaths, was treating 18,000 people with fevers and had placed nearly 190,000 more in isolation.

On Sunday, leader Kim Jong Un said the outbreak had thrust the country into "great turmoil." State media, meanwhile, said an additional 174,400 people had symptoms, like a fever, that could be caused by COVID, marking a tenfold increase from the 18,000 such cases reported just a few days before.

The stark admission that the authorities are struggling to contain the problem is a remarkable about-face for a country that has previously boasted that its policy of sealing the borders in the early months of the pandemic had been successful in keeping the virus at bay.

Few virologists believed the claim at the time but international health and aid organizations were initially restricted to Pyongyang before eventually being ordered to leave the country.

The country has one of most under-resourced health systems in the world and no COVID-19 vaccine program, mass testing capacity or antiviral treatment drugs.

Dissident media have periodically reported claims that an unidentified illness was running rampant through a society with extremely limited public health capabilities and that the victims were being buried before a cause of death could be confirmed. But the regime of Kim Jong Un continued to insist that nothing was amiss.

Pyongyang even went as far as turning down an offer from UNICEF in September last year of 3 million doses of the Sinovac vaccine on the grounds that it was handling the situation in "our style."

On Thursday, Kim ordered a nationwide lockdown, with state media releasing images of the dictator chairing a meeting of his politburo in a mask. The government has described the situation as a "most critical emergency" for the nation of 26 million people, with residents of the capital ordered to return to their homes on Thursday and remain inside.

The imposition of a lockdown — for an unspecified "national problem," the public was told — has led to reports of panic buying and shortages of some staples.

"For Pyongyang to publicly admit omicron cases, the public health situation must be serious," said Leif-Eric Easley, an associate professor of international studies at Ewha Womans University in Seoul.

"Pyongyang will likely double down on lockdowns, even though the failure of China's 'zero-Covid strategy' suggests that approach won't work against the omicron variant," he told DW. "North Korea is entering a period of uncertainty in managing its domestic challenges and international isolation.

"The Kim regime would be well advised to swallow its pride and quickly seek donations of vaccines and therapeutics."

The office of the new South Korean president, Yoon Suk-yeol, confirmed late on Thursday that it was ready to provide humanitarian assistance to its neighbor, with Seoul apparently considering medical assistance to be an exception to the broad sanctions that have been imposed on the North for its nuclear and long-range missile programs.

Should the offer be accepted, aid might act as a breakthrough in the chilly relations on the peninsula, although that likelihood appears to be slim.

China has similarly said it is ready to "fully support" its ally.

In a press briefing at the White House on Thursday, spokeswoman Jen Psaki said the US would support international efforts to help vaccinate the people of North Korea – but pointedly accused Pyongyang of harming its own citizens by denying them access to international aid by instead opting to spend its limited financial resources on nuclear weapons.

Despite the offers of assistance, Pyongyang appears to be set on a path of confrontation and provocation, despite the worsening health crisis.

Three short-range ballistic missiles were fired into the Sea of Japan late on Thursday evening, with analysts suggesting the launches had the twin aim of distracting domestic attention away from the nation's health crisis and simultaneously sending a warning to Yoon, the conservative prime minister who was sworn in on Tuesday.

"It is difficult to know what is happening in the North because it is such a closed society and we cannot trust what they say, but my belief is that there will be a lot of cases of the coronavirus there," said Park Jung-won, a professor of politics and international relations at South Korea's Dankook University.

And while other countries have seen instances of social unrest as a result of restrictions imposed in an effort to combat the spread of the virus, Park said protests against the government's handling of the crisis are unlikely.

"They will be able to use this as a form of political propaganda, to let the world know that the situation is under control and that the people are complying with the government's orders," he told DW.

It is also possible that the North is "giving very mixed messages" ahead of US President Joe Biden's visit to South Korea next week, Park added, and attempting to sow further confusion about Pyongyang's intentions and priorities at a time when Seoul and Washington are attempting to focus on the North's weapons programs and the possibility of a new underground nuclear test in the coming weeks.