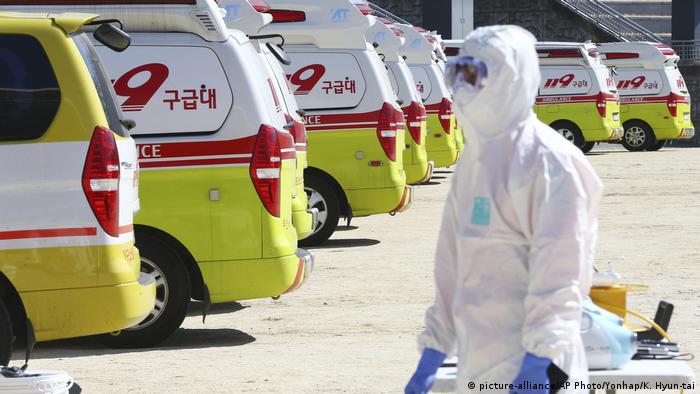 Human rights activists have accused the North Korean government of endangering lives by refusing to confirm cases of COVID-19. They also warned that authorities could limit medical assistance to North Korea's "elite," which would lead to a human rights "atrocity."

Officials in the capital, Pyongyang, consistently deny that there have been any cases of the virus in North Korea, saying the decision to completely close the border with China has been effective in keeping the disease at bay.

Defectors with contacts in the North and dissident media have a different story. The South Korea-based website Daily NK reported that at least 20 people have died from COVID-19 since January.

Sources inside the impoverished country say that health officials have been classifying deaths that are probably due to COVID-19 as having been caused by pneumonia, and quickly cremate remains to prevent examination.

South Korea's Yonhap News has also reported that around 7,000 people are being monitored for symptoms of the virus, while the North Korean government is encouraging foreign diplomats stationed in Pyongyang to leave the country for the foreseeable future.

Cooperating with the North

The World Health Organization (WHO) has been granted permission by the United Nations to transport diagnostic and medical equipment into North Korea, while the International Federation of Red Cross and Red Crescent National Societies and Doctors Without Borders have also offered assistance.

The government of South Korea also proposed joint efforts with the North to cooperate to halt the spread of the disease.

"Our government will prepare for inter-Korean cooperation in health care, prevention of diseases, natural disasters, climate change and other fields when the conditions are ripe," said a spokesman for the Unification Ministry in Seoul on Monday.

Given that North Korea has ignored all efforts at dialogue from South Korea for more than six months, analysts say it is unlikely that Seoul's offer will receive a warm response.

"Given the current state of inter-Korean relations, Pyongyang would only request coronavirus assistance from Seoul if the situation became desperate," said Leif-Eric Easley, an associate professor of international studies at Ewha Womans University in Seoul.

"If the politics were better, North Korea might accept South Korean aid discreetly," he added. "The North is already quietly bringing in masks, disinfectants, medicines, and testing kits from China and international organizations. But the Kim regime prioritizes projecting strength, preventing panic and controlling its population over protecting public health."

"It will thus under-report its coronavirus problem until a crisis is undeniable, at which point the regime will likely blame external sources for infection and punish internal scapegoats for corruption and failing to carry out orders," he said.

And Easley warns that the North's already inadequate public healthcare capabilities will be overwhelmed by a flare-up that is even a fraction of the scale of the outbreaks in China or South Korea.

"North Korea takes such draconian measures as closing its borders and militarily enforcing quarantines to prevent COVID-19 contagion because the country does not have the public health capacity to deal with a major outbreak," he said.

"Although Pyongyang's policies differ in degree, they fit a pattern of playing up and reacting aggressively to external threats."

Rights activists say that waiting until the crisis is already well under way means that potentially thousands of ordinary people who could benefit from access to treatment will instead die.

"It is the responsibility of a government to look after its people. To deliberately not do that is an abuse of the rights of the North Korean people," said Ken Kato, the Japan-based director of Human Rights Asia.

"One big concern is that any medicine or assistance that is passed on to the government there will only go to the 'elite.' These are people that Kim Jong-un needs to keep happy so that he can stay in power," Kato told DW. "The 'elite' are too important to him."

"But we believe that they should be doing everything they can to be prepared for what could be coming and to help all the people of the country," he added.

Song Young-chae, a professor at Seoul's Sangmyung University, and an activist with The Worldwide Coalition to Stop Genocide in North Korea, said claims that there are no COVID-19 cases in the North cannot be considered credible.

"My defector contacts have friends still in the North and they say that the virus is spreading and that the declarations of the government are lies," he said.

"This is a human rights issue and everything should be done to help the people who are not important to the regime and will have no access to medicines," he said.

"We need transparency in where any aid goes to make sure that it does not just go to the leadership, who have shown over and over again that their only interest is in their own safety and continuing the rule of the Kim family."