The line that separates North and South Korea is considered the most hostile frontier in the world. But at least one part of the border has been turned into a kind of amusement park accessible for the right price. 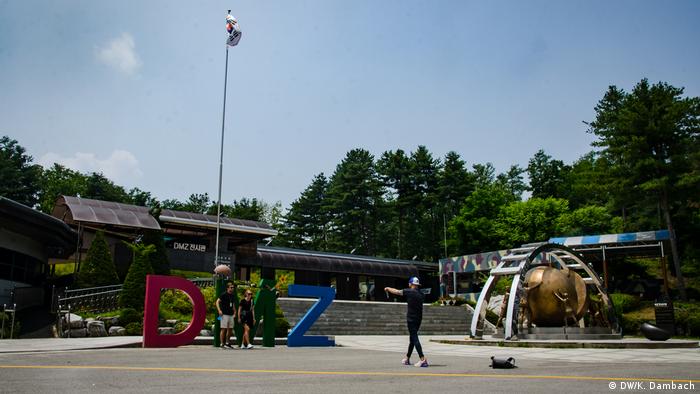 Tourists pose for pictures at the Korean Demilitarized Zone

The Korean Peninsula has seen many changes since the 1950s and the Korean War. The ironically named Demilitarized Zone (DMZ) is the most prominent feature of the peninsula. With more than 240 kilometers (150 miles) of fences, landmines, guns pointed at anyone who dares come close, it looks like a beefed-up, more modern version of the Berlin Wall.

The place to begin if you are interested in seeing the DMZ is Seoul. The border is just an hour's drive away from South Korea's capital and largest city. Seoul is eager to show that times have changed since 1979 when an assassination put an end to General Park Chung-hee, who ruled the country with an iron fist. In the years that followed the city hosted a Summer Olympics and World Cup matches. It is now home to companies like LG and Hyundai, two of the biggest corporate names in the world. All within easy striking distance of North Korea. And yet the people of Seoul go about their day barely paying any mind to what some described as their "annoying brother" to the north. 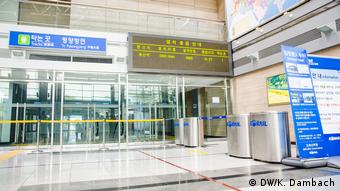 The final train station in South Korea before hitting the DMZ, Dorasan, sees just one tourist train per day

South Korea could be akin to West Berlin if one really thought about it. Though it is not surrounded by North Korea, it is still very isolated, as it's only accessible by plane or boat. And remember, no peace treaty was ever signed which means these two countries are still technically at war.

Despite the horror stories of people dying trying to escape from one side to the other, it's actually very easy to get to — and even cross — the DMZ. Well at least at the one part that isn't packed full of things intended to kill you. All you have to do is pay the right price.

There are several tour groups that take visitors to the front lines of the Korean conflict. Where you go depends on how willing you are to open your wallet. Just want to look at the border? That will cost at least 40,000 Won (€30, $33). Want to recreate the steps that the Korean leaders took over the line at the DMZ? That will set you back 100,000 Won. And if political tensions rise and leaders or soldiers need to exchange pleasantries at the border, no tour and no refunds.

While many visitors hail Koridoor as the most reputable company for DMZ tours, I went with GetYourGuide as there was one thing that I was really interested in: a Q&A with a North Korean defector. 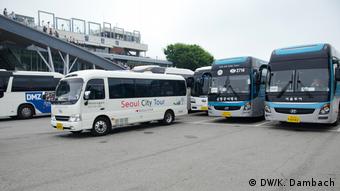 The bus picked us up from a fancy hotel in downtown Seoul. Perhaps as a quick reminder of the luxury we were about to leave behind.

As soon as Seoul vanished on the horizon, barbed wire fencing sprang up along the road. The guide on the bus said it was installed to prevent a potential invasion. People here have learned to live with this permanent threat and have got used to the sight of defenses, I suppose. This potential sobering moment was kept light by the comic relief served up by our guide and his jokes about North and South Korea.

Just before the main security checkpoint for the DMZ, there was a visitor's center and small fairground for children and families to play in — complete with both American and Korean fried food. Every tour group, it seemed, stopped here along the way. Buses in all colors and passengers speaking many different languages crammed the parking lot near the military-grade fencing. My tour guide laughed saying that here children play while adults are at war.

After a few minutes at the park, we had to go through a military checkpoint in order to get closer to the DMZ. No games or funny business here as Korean soldiers concentrated on checking our passports and how many of us were on the bus. A miscount sent us back to the park for a recount, then another check from the military. Even though we were clearly tourists, there was no room for error for them or us as we crept closer to the border.

At this point, you could see evidence born of the hope that one day the border would be nothing more than a line in the sand, like the Wall that once divided West and East Germany 30 years ago. The Dorasan rail station, just a quick walk from the border, represents the vision of a joined Korean railway. But for now, it sits barren except for a trinket stand and a daily tourist train, bringing visitors up from Seoul.

Our guide kept things calm on the bus as we got even closer to North Korea. He beamed as he told us to buckle our seatbelts as we crawled next to an active minefield on a steep hill. "Not yours, it's mine!" He quipped as we traversed down the only safe road. His quirky grammatical humor put us passengers at ease, especially as we were aware that he obviously has taken this trip several times before and clearly hadn't been blown up doing so. 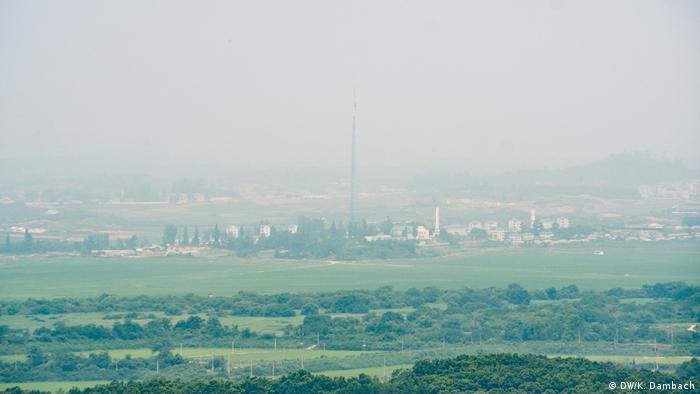 Just beyond the haze lies North Korea, announcing its presence to tourists with a well-groomed town no one lives in

At the top of the hill was an observatory that would allow us our only glimpse into North Korea. On an incredibly hazy day, we could barely make out the massive flagpole from the well-maintained ghost city on the other side of the border. North Korea's fake town Kijong-dong was first built in the 1950s to lure South Koreans to defect and move across the border. From visual observations from the South, it has been uninhabited with windowless, incomplete buildings since its construction.

Before we entered the third tunnel, we got to watch a short film about them. Several have been found, but many more have not. The film had a North Korean propaganda feel to it, but showing the north to be the baddies. Terrible animation, complete with crude explosions over Seoul, and an overjoyed tone about the situation along the DMZ made it a tough film to digest. 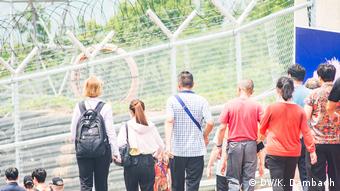 Barbed wire fencing is a common sight on the tour

"Did you like our South Korean propaganda?" our guide asked the tour group. Knowing he knew this was blatant propaganda I found rather reassuring.

After that rather unpleasant portion of a southern version of North Korean propaganda, we strapped on helmets and walked less than 200 meters (656 feet) from the border with North Korea.

As this was considered a military area, no cameras were allowed, not even our phones. Had we really wanted to run into North Korea, there was merely a barbed wire fence and a few barriers to slow progress in that short distance. However, it was best to leave that idea alone.

While there were people from several nations on the bus, there was a very quiet Korean girl who seemed uninterested in the sights. Always standing off to the side, face buried in her phone — a walking Korean stereotype. We found out why on the way back. She was the defector and we had the whole hour-long drive back to hear her story and ask her questions.

After a reserved bow to us, she shared her life story, which our guide translated. She grew up near the border with China and escaped across it earlier in the decade. After a dangerous trip through China and Vietnam, she eventually arrived safely in South Korea three years ago. She still has several family members in North Korea, who she says she keeps in contact with and sends money to.

Much to my dismay, not everyone listened to her story. It was a very hot day which had seen us rise early and spend a fair amount of time walking in radiant sunshine, but it was still unbelievable to me that some people slept through what would likely be their only chance to hear a defector's story first hand.

After she had finished we got to ask her about her life and what she thought of North Korea now. I wanted to know how she felt coming within a short walk of the country she had fled. When she first started doing tours like this, she told me, she would be terrified and cry as the bus approached the border, knowing what really lay on the other side. But now that she knows she is safe, that no one will whisk her away, she is much more comfortable with traveling on DMZ tour groups. She got an ovation from the tour group for her bravery and willingness to share her story. 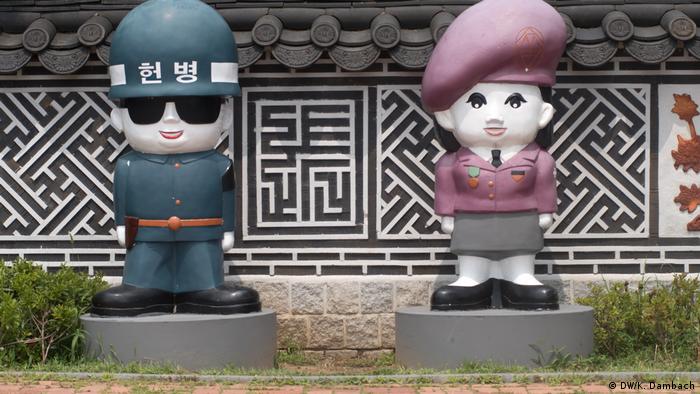 After we got back to Seoul, some people stayed on the bus to enjoy a different part of the tour itinerary. Before we left, everyone thanked the defector once again for sharing her story, by shaking her hand, bowing, genuinely showing how thrilling it had been to have met someone with such knowledge and personal insight into one of the most closed-off, repressed places in the world.

The tour guide had told us to "make ourselves at home" during the tour. It's pretty easy to do that in Seoul too. Even with missiles and secret military tunnels pointed directly at the city from a few kilometers to the north, it's still possible here to forget all that. People seem to have become philosophical about the threat and say that if North Korea was going to destroy Seoul, it would have happened by now. They don't completely ignore the neighbors, obviously, but they concentrate on going about their everyday lives. There is so much else to do rather than worry about their troublesome northern neighbors.

While opinions are certainly divided on what can be done to ensure their former countrymen are granted basic human rights, they are all aware that there is a limit to how much an individual can do. And while it took less than 30 years for the Berlin Wall to rise and fall, it is safe to say that the DMZ will remain a lot longer — having already put some 66 years on the clock. It seems here the Cold War is far from over.