North Korean leader Kim Jong Un ordered cities to "strictly lock down" after authorities confirmed the first case of the omicron variant. The nation has so far denied having any infections, but experts are skeptical. 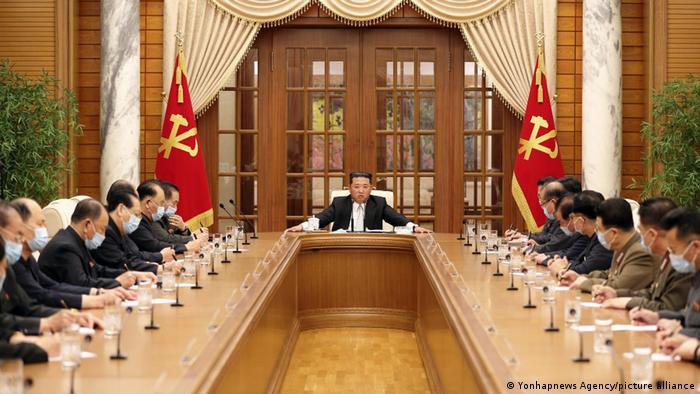 Six people have died and 350,000 people have been treated for a fever that spread "explosively" across the state, state news agency KCNA reported on Friday.

North Korea said it didn't know the cause of mass fever among its populace and that people fell ill around late April. Of the large numbers who fell sick at the time, around 162,200 people had recovered, KCNA reported.

KCNA also said around 18,000 people developed symptoms of fever on Thursday alone. 187,900 people are currently being isolated for treated.

South Korea on Friday said it would provide COVID-19 vaccines and other medical supplies to the North.

"We will discuss detailed plans for assistance with North Korea," President Yoon Suk-yeol's office said in a statement.

The isolated nation has never admitted to having a single case of the coronavirus. The government has imposed a rigid blockade of its borders since the start of the pandemic in 2020.

The state news report said a sub-variant of the highly transmissible omicron variant had been detected in the capital, Pyongyang. It did not provide details of case numbers or possible sources of infection. The samples of the infected people were collected on May 8, it said.

"There has been the biggest emergency incident in the country, with a hole in our emergency quarantine front, that has been kept safely over the past two years and three months since February 2020," KCNA said.

A meeting with top Workers' Party officials, including leader Kim Jong Un, was held, where it was decided that a "maximum emergency" virus control system would be implemented, the news agency reported.

Meanwhile, South Korea's presidential office said it was willing to provide humanitarian assistance to the North.

According to KCNA, Kim ordered all cities and counties to "strictly lock down" to prevent the virus from spreading and said emergency reserve medical supplies would be mobilized.

South Korean and Chinese media had reported that North Koreans had been advised to stay home, without referring to the COVID-19 virus.

Although North Korea has denied having any coronavirus infections in the country prior to this, experts have cast doubts over these claims.

Pyongyang has declined shipments of vaccines from the COVAX global COVID-19 vaccine-sharing program and the Sinovac Biotech vaccine from China.

North Korea has defied international sanctions on its weapons program and has continued to ramp up the testing of weapons it deems essential to its survival.