US Secretary of Defense Mattis has said that Trump has made his preference for diplomacy with North Korea clear. But just one day prior, North Korea's top envoy had accused the US of declaring war on his country. 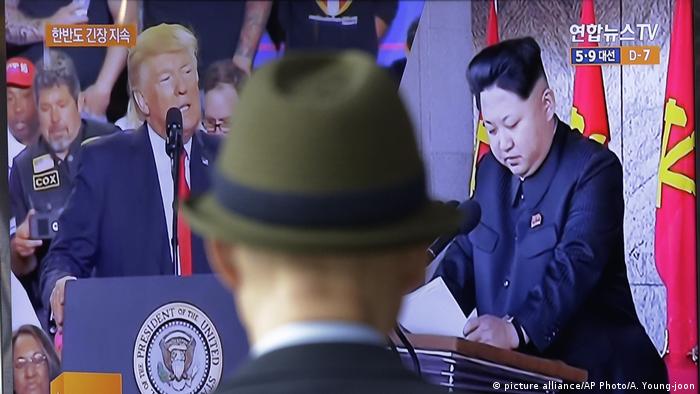 After the war of words that erupted between North Korean officials and US President Donald Trump over the weekend and into the start of the week, US Defense Secretary Jim Mattis sought Tuesday to de-escalate the tension by renewing calls for a diplomatic solution to the standoff over Pyongyang's nuclear ambitions.

In sideline comments during a visit to India, Mattis said that the US was continuing to "maintain the diplomatically led efforts in the United Nations." 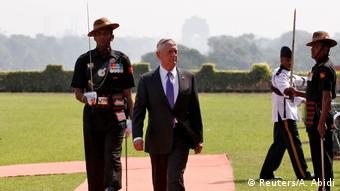 Mattis was in New Delhi to meet with Prime Miniser Modi

"That is our goal, to solve this diplomatically, and I believe President Trump has been very clear on this issue," Mattis said. The defense head also underscored that recent UN resolutions had "increased the pressure" on Kim Jong Un's regime, while highlighting that the US possessed the military capability to "deter North Korea's most dangerous threats."

Mattis' statement came one day after North Korea's foreign minister struck back at the US president, providing the latest rhetorial attack in a series of heated comments that have raised concerns over the prospects of nuclear warfare between Pyongyang and Washington.

"The whole world should clearly remember it was the US who first declared war on our country," Ri Yong Ho had told reporters outside the United Nations General Assembly in New York on Monday. 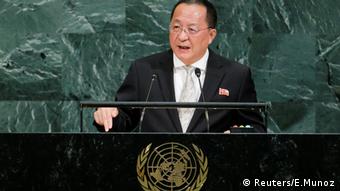 "Since the United States declared war on our country, we will have every right to make countermeasures, including the right to shoot down United States strategic bombers even when they are not inside the airspace border of our country."

Ri was referring to Trump's tweet over the weekend, where, in response to Ri's address before the General Assembly on Saturday, he posted that the North Korean regime "won't be around much longer."

Ri said "the question of who will be around much longer will be answered then."

The North Korean foreign minister made the remarks to reporters as he was leaving the United Nations. He then returned from his car to add: "In light of the declaration of war by Trump, all options will be on the operations table of the supreme leadership of the DPRK (Democratic People's Republic of Korea)."

He did not comment on the US's decision earlier on Monday to extend its travel ban to bar North Korean nationals from entering the country.

White House: 'We have not declared war on North Korea'

The White House responded to Ri's comments by Monday afternoon, calling them "absurd."

The White House also criticized his assertion that Pyongyang would shoot down US military planes.

"It's never appropriate for a country to shoot down another country's aircraft over international airspace," Sanders said.

Pentagon pledges to provide Trump with 'all options'

Earlier on Monday, the Pentagon pledged to provide Trump with all options to deal with a North Korean military threat.

"If North Korea does not stop their provocative actions, you know, we will make sure that we provide options to the president to deal with North Korea," said Pentagon spokesman Colonel Robert Manning shortly after Ri's comments.

On Saturday the Pentagon confirmed that it had sent B-1B bombers from Guam and F-15 fighter escorts from Okinawa in Japan to fly through international airspace over the waters east of North Korea.

N. Korea: attack on US ‘inevitable’

It marked the farthest point north of the border between North and South Korea that any US aircraft had flown this century. The Pentagon said the mission showed "how seriously President Donald Trump takes North Korea's reckless behavior."

North Korean leader Kim Jong-Un has vowed to advance the country's nuclear weapons program, despite prompting international condemnation and sanctions. The North has repeatedly accused the US of planning to invade. Some 28,500 American troops are stationed in South Korea, a legacy of the 1950-53 Korean War.

Beijing urges all sides to stop adding 'oil to flames'

Asked on Monday how concerned Beijing was that Trump and Kim's war of words could escalate, China's foreign ministry spokesman, Lu Kang, said it was imperative that all UN resolutions related to Pyongyang be implemented and that dialogue be resumed.

Read more: Why China won't help US against North Korea

The UN has imposed a number of sanctions and embargoes against the North, including a ban on the export of weapons and various metals. Financial transactions with North Korean entities or individuals are also prohibited, although still remain commonplace.