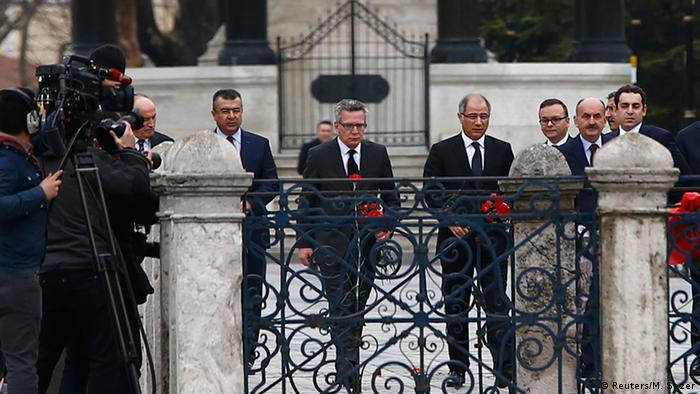 "In the current stage of the investigation, there is no indication that the attack was targeted against Germans. I see no reason to refrain from trips to Turkey," German Interior Minister Thomas de Maiziere said at a joint press conference with his Turkish counterpart, Efkan Ala in Istanbul on Tuesday.

"I am deeply shaken by yesterday's barbaric attack," de Maiziere said, calling it "an attack against humanity."

The minister visited the Sultanahmet area in Istanbul, where a suicide bomber blew himself up, killing 11 people and wounding several others. De Maiziere also visited a hospital where the injured were being treated.

"I must relay the sad news that we now have 10 dead Germans among the victims" from Tuesday's attack, ministry spokeswoman Sawsan Chebli told reporters.

Chebli also confirmed seven wounded Germans were being treated in hospital in Istanbul, five of them in intensive care. 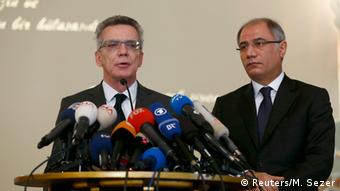 Emphasizing Germany's close relations with Turkey, de Maiziere said that both countries were affected by terrorism and that a common response was necessary to counter the threat. "Germany and Turkey are coming even closer to each other," he said.

Meanwhile, Turkish police arrested one suspect in connection with the bombing, Turkey's Interior Minister Efkan Ala told journalists. Police had also taken fingerprints of the attacker earlier, Ala said, although he did not specify the context in which this happened.

Security forces arrested more than 3,300 people in operations against the "Islamic State," which allegedly carried out Tuesday's strike. 220 people linked to the terror group were taken into police custody last week alone, Ala said.

Earlier on Wednesday, Turkish authorities arrested three Russians linked to the IS in Izmir and Antalya provinces. 68 suspects across several cities in Turkey, Turkish media reported.

No group has taken responsibility for the strike in Istanbul's historic Sultanahmet area. 10 people were killed and 17 others were wounded. 11 were still in hospital, including two German nationals, who were in a critical condition

The alleged suicide bomber, a 27-year-old called Nabil Fadli, was born in Saudi Arabia and moved to Syria when he was eight years old, the Saudi-owned al-Hayat newspaper said. He was a Syrian citizen.